» Lights out – The end nears for the incandescent light bulb 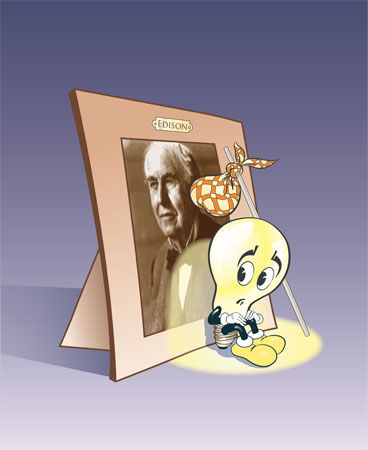 Lights out – The end nears for the incandescent light bulb

It has been a fixture of Western culture, brightening the lives of billions of people for the past 140 years. But modern technology and environmental concerns have finally connected to short-circuit its popularity. And now, as bans against it switch on in countries around the world, the future of the incandescent light bulb has become decidedly dim.

It has been a fixture of Western culture, brightening the lives of billions of people for the past 140 years. But modern technology and environmental concerns have finally connected to short-circuit its popularity. And now, as bans against it switch on in countries around the world, the future of the incandescent light bulb has become decidedly dim.

The incandescent light bulb is on the way out, and in the view of many it is a shocking end to an illumination invention that forever changed the world.

The light in an incandescent bulb is produced when an electric current passes through a thin filament inside an oxygen-free glass bulb, making it glow white-hot. The technology has remained pretty much the same since 1879, when American inventor Thomas Edison brought to market a patented electric lamp that used a carbonized bamboo filament connected to platina contact wires that could last for more than 1,200 hours.

“When you think of all the things that have happened in the world since then, it’s quite extraordinary that we’re still using that light,” says Joe Rey-Barreau, an associate professor in the School of Interior Design at the University of Kentucky and an expert in luminous environments and lighting design. He explains that three main factors set Edison’s bulb apart from 20 or so would-be competitors – the development and use of long-lasting incandescent material, the high vacuum achieved through the use of the Sprengel pump, and a high resistance that made power distribution from a centralized source economically viable. But, he says the low cost and the many heart-warming properties of incandescent light itself have promoted the bulb’s continued dominance in residential markets in North America and Europe for more than a century.

“Compared to fluorescent bulbs, which took over the commercial and industrial markets 40 years ago because they have much longer life, incandescent light bulbs are very inexpensive,” he says. “They also have several qualities that other forms of lighting don’t.” In addition to being dimmable and providing excellent light for reading, Rey-Barreau says, the 2,700 kelvin color temperature of incandescent light “by its very nature tends to brighten human skin and give it a healthy glow.”

“Incandescent light bulbs have been described as fire in a bottle,” Rey-Barreau says, “and it is literally metal being heated until it’s glowing hot, so they give off cosy heat, too. All of those things have combined to create some kind of a cultural connection.”

Unfortunately, it’s those same endearing traits that are now draining the life out of the incandescent light bulb. In recent years, Kyoto-inspired efforts to reduce electricity consumption and reduce greenhouse gas emissions have focused increasingly on lighting, which represents about 20 percent of global electricity consumption. And from the start, the incandescent light bulb, which uses only 5 percent of the electricity that flows into it to produce light (the other 95 percent escapes into the air as heat), has been labeled Public Enemy No. 1.

Brazil, Venezuela and Cuba were the first governments to act, passing laws that either prohibited or phased out the sale and/or importation of incandescent light bulbs beginning in 2005. Since then, dozens of countries have followed suit with phase-out schedules of their own, including Australia, the European Union, Argentina, Russia and Canada.

The United Kingdom plans to ban the sale of incandescent lights in 2011 – ending a 130-year relationship that began in 1881 when London’s Savoy Theatre became the first public building in the world to be entirely lit by Edison’s light bulbs. Even the nation in which Edison switched on the world’s first electric light bulb, jumped on the anti-incandescent bandwagon in 2007, when former President George Bush signed into law an energy bill that, starting in 2012, sets an ever-escalating standard for energy-efficiency standards that the old bulbs, energy experts predict, will soon be
unable to meet.

Once weaned from those energy-wasting incandescent light bulbs, consumers worldwide will be able to choose from a growing array of more energy-efficient (but far more costly) types of electric lights, notably compact fluorescent lamps (CFLs) and light-emitting diodes (LEDs). “The industry and the public are on the same page on this issue,” says Larry Lauck, general manager of the American Lighting Association, which represents U.S. light manufacturers such as General Electric, the company that Edison founded 118 years ago and that is reportedly working hard to develop a new generation of incandescent lights that can meet the future standards. “When energy was cheap, no one cared. But everything’s changed.”

But skeptics, and there are many, question both the wherefore and the why of the rush to dump the incandescent bulb. In addition to concerns over the quality of lighting and the variety of CFLs available to fit billions of household appliances and fixtures – everything from stoves and chandeliers to appliances and flashlights – environmentalists point out that CFLs contain mercury, meaning they can’t be thrown out the way nontoxic incandescent bulbs can. Many people also lend a therapeutic value to incandescent light.

Then there’s the economic angle. “If you’re a consumer,” Brian Carney, a member of the Wall Street Journal’s editorial board, wrote after the U.S. energy law was passed, “you just got traded up, forcibly, to a ‘better’ product. What’s remarkable about this bit of market interference is that there is basically nothing wrong with the present-day Edison-style light bulb. It’s not a lawn dart or a lead-painted toy or a magnet that will perforate your kid’s intestines if he swallows it. It is what it is, and for most people in most applications, it was good enough. So the light-bulb makers and the environmentalists convinced Congress to ban them for no better reason than they believed everyone would be better off with something else.”

Rey-Barreau agrees. “There’s a lot of frustration,” he says. “I’ve heard people say they’re going to buy a truckload of incandescent bulbs now at 50 cents each, wait five years, then sell them for 10 bucks each.” That resembles the panic buying that hit several European countries in 2009 – none more than in the Czech Republic, where President Vaclav Klaus held up an incandescent bulb during a speech and said he “would buy enough reserves [before the September 1 deadline when production halted] to last the rest of my life.”

That also suggests there is a glimmer of hope for the survival of one of the most endearing byproducts of the incandescent light bulb – the dim-witted light-bulb joke. Here’s one from Andrew Heenan’s weirdity.com website: A lady goes into a shop and asks for a box of low-energy light bulbs. “That’ll be $4.00 please,” says the shopkeeper. “$4.00?” says the lady. “They are only $3.50 next door.” “Why don’t you get them next door then?” asks the shopkeeper. “I would,” she replies, “but they haven’t got any in stock.” “Ah,” says the shopkeeper, “ours are only $1.99 when we haven’t got any.”

Coatings maximize the service life and performance of rolling and plain bearings. They can satisfy a variety of operating conditions and application [...]
Bearing life,Bearings,INSOCOAT bearings,
Manufacturing