» Centerless grinding of cam and crankshafts 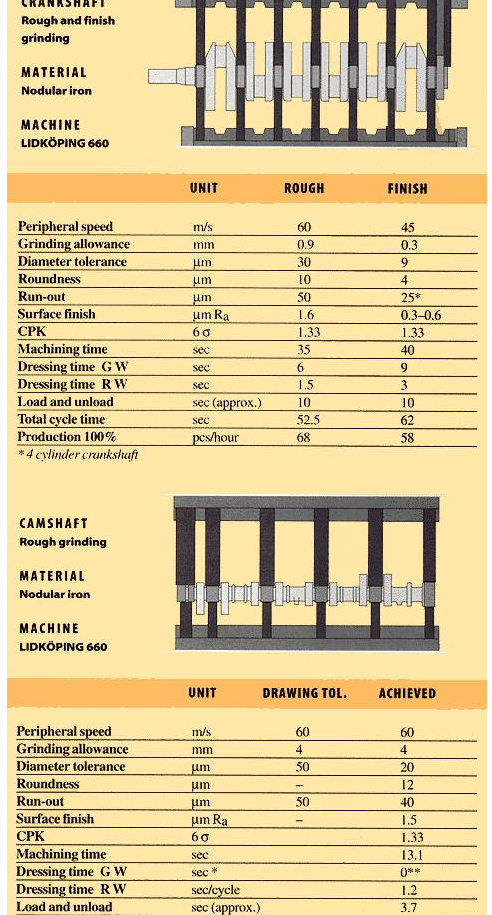 Centerless grinding of cam and crankshafts

The development of centreless grinding came about following co-operation between Lidköping Machine Tools AB, part of SKF, and Swedish car maker, Volvo in Skövde in 1972. Then work began to replace rough turning with centreless grinding. Cast material is ground directly, the grinding allowance being 3-4 mm.

Results of trials showed that both productivity and quality could be improved considerably. The following year two centreless grinding machines, called the LIDKÖPING 46 were delivered to Volvo, of which one is still in operation today.

Finish grinding of bearing journals was at that time still carried out in multi-wheel machines. It was not until hydraulic valve tappets came into general use that companies began to turn more to centreless grinding.
Even here Volvo was the first to co-operate in the development. Hydraulic valve tappets put a greater demand on concentricity between bearing journals and camlobe base circle. It then became natural to grind the lobe using the ground bearing journals as a reference rather than the centres – the same way in which the shaft operates in the engine. Simple logic! The same applies to crankshafts.

Centreless grinding of crankshaft bearing journals is in many respects similar to camshaft grinding.

The main differences are:

Even for centreless crankshaft grinding, Lidköping Machine Tools is considered a pioneer. The first machine was delivered in 1985. Since then a further 10 or so machines have been delivered for grinding crankshafts. The automotive industry, however, is often conservative when it comes to the introduction of new production processes and despite very positive experience, the significant breakthrough in the application of centreless grinding of crankshafts is still to come.

The benefits of centreless grinding when compared with multi-wheel processes include:

An accuracy that would be undreamed of 20 years ago is now being achieved.

Take the situation when the grinding wheels have been dressed and grinding has started. The different diameters are within tolerance, but there are still deviations from the nominal size. The gauging system tells the control system by how much each diameter deviates from the nominal. These deviations will be recorded by the computer and the weighed average over a number of workpieces will be calculated and used for the next dressing.

The grinding results can be optimised by paying attention to the dressing and compensation process. Factors such as workpiece materials, grinding and regulating wheel quality, dressing intervals, dressing tools, type of gauging equipment, stock removal, actual tolerances and methods of calculating and applying measurement techniques are all continually reviewed to improve the overall result.

Tolerances as small as 9 microns with CPK 1.33 on a six cylinder crankshaft have been achieved – that means a tolerance within 5-6 microns on 7 journals simultaneously.

Lidköping Machine Tools has also developed a method of automatically adjusting diameter sizes either at start-up or following redressing of the regulating wheels. Up to five workpieces are ground oversize to compensate for diameter deviations by means of the dressing equipment. Then grinding to correct dimensions can take place.

The first centreless grinding process in the UK for grinding of camshaft journals was introduced at the plant in Bridgend, South Wales. In 1984, problems were becoming apparent with respect to their process relating to the FORD CVH lean burn engine at Bridgend. It was at this time that the production engineer responsible for the line, Derek Taylor, reviewed the process of grinding the camshafts.

This involved replacing the existing between centres turning with centreless grinding of the bearing journals and seals from the cast condition. Against strong competition Ford selected the LIDKÖPING 660 machine with automatic facilities as being the solution to the problems.

A further machine was added in 1988 to cover an expansion programme, which was followed by a further four machines a year later for the Zeta programme. At Ford’s Dagenham plant two machines were introduced for the company’s diesel line.

Line operators confirmed that though the original machine was more than 10 years old, it was still producing to the same quality standards as when originally installed.

Based in Södertälje, Sweden, Saab was the first automobile manufacturer to grind main journals, sealing diameter, tappet end and flywheel diameter of crankshafts in a centreless machine instead of grinding between centres. This way of working was begun in 1985. Ten years later, Saab has ordered 3 additional 660 machines for rough and finish grinding.

“Sure, there were some problems in the beginning but now production runs very smoothly and the advantages of centreless grinding over grinding between centres are obvious, both when it comes to production and quality,” says Lars Porling, production manager for the crankshaft line at Saab.

Milenko Zivkovic, who operates one of the finish-grinding machines adds; “We simultaneously grind 8 diameters. The diameter tolerance is as close as 10 microns. The fact is that since April 1993, I have ground only 6 camshafts that were rejected, and I cannot blame the machine for it.”

Here, the first centreless grinding process in the UK was introduced to combine rough and finish grinding of camshaft journals.

It was in 1988 when the Rover Group was developing its highly acclaimed K- series engine that Derek Willis, then process engineer for this project, investigated the possibilities of centreless grinding. Initially he looked at rough grinding of camshafts between centres but then Willis became convinced of the benefits of centreless finish grinding following its adoption by several European manufacturers.

During the time that the two 660 machines have been operating at Rover, millions of high quality camshafts have been produced maintaining diameter tolerance of 5 microns with a run-out better than 4 microns.