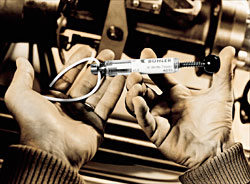 Your daily bread – as well as your pasta, pastry and breakfast cereal – may all have passed through a grain milling or cereal processing plant from Bühler AG.

High demands in the grain mill
In its new, high – performance Newtronic roller mills for grinding grain, Bühler uses exclusively SKF 22315 EK Explorer spherical roller bearings. The bearings in this machine have an especially hard life because of the highly loaded bearing arrangement. The Newtronic – available in four – roll and eight – roll versions – grinds by constantly forcing the two rolls in a pair tightly against each other as they rotate at slightly different speeds.
“Competition tried hard to muscle in on this application, but we carried the day for technical as well as commercial reasons,” recalls Peter Frikart, the SKF sales engineer who links with Bühler. “On the technical side, Explorer’s load rating is higher than that of the non – Explorer bearing, which was on offer. Explorer also has excellent vibration behaviour, which means less noise from the machine. And Explorer’s longer bearing life gives Bühler greater assurance against unplanned downtime.”
SKF has supplied bearings to Bühler for more than 60 years, according to Erwin Hohermuth, R&D project manager of Bühler’s grain milling division. Spherical bearings became a standard fitting on Bühler’s roller mills some 50 years ago. Today the link between the two companies, both of which invest continuously and heavily in research and development, is broader and deeper than a mere purchaser – supplier relationship.
“Our companies signed a partnership contract in 1995. It not only lays down pricing policy, delivery conditions and other commercial parameters, it also means that our companies operate as genuine partners in a lot of Bühler’s development work. SKF worked with us, in fact, throughout the development of the Newtronic, and this new roller mill owes part of its success to their contribution,” Hohermuth says.

Discerning pasta eaters prefer their dish al dente  –  literally “to the tooth,” meaning neither too soggy nor too hard. Caring cooks go to great lengths to get the texture just right. Bühler AG has outdone even the most fastidious chef: It created an al dente tester to give this culinary criterion a scientific basis.
And who is Bühler AG, that it should be so concerned about the toothsome qualities of pasta? This Swiss company describes itself as “the global technology partner for efficient production systems, engineering solutions and the associated services in the food processing industry, in chemical process engineering and in die – casting.”
The company is headquartered at Uzwil, between Zurich and St Gallen. Established by Adolf Bühler in 1860 as an iron foundry, Bühler AG is still family – owned. The food processing industry became an important customer in 1872 when the company made its first cast – iron grain rollers to replace the porcelain ones used in grain mills at that time.
Six years later, Bühler produced its first complete roller mill, and in 1890 built its first complete milling plant. Over the next 30 years, silos and elevators for discharging grain from ships, machinery for making bread, pasta and pastry, complete installations for breweries, chocolate grinding plants and various other types of food processing equipment joined the product list. After that came machinery for making animal feed, followed by chemical process and die – casting equipment.

Grain to flour
Today, Bühler is a global company with more than 6,000 employees worldwide, and annual sales of more than 1.5 billion Swiss francs. Of this total, grain milling installations and related equipment account for half.
In a grain milling plant, wheat, rye or other grain goes in at one end and flour comes out at the other. It sounds simple, but a milling plant is a large and complex installation. Breaking, sifting, purifying and reducing the grain are the main process steps. The equipment includes silos, samplers, separators, sifters and scourers.
“All of this is essential, but the roller mills, which reduce or grind the wheat to the required fineness, turning it into flour, semolina and bran, are the heart of any flour production plant,” says Erwin Hohermuth, R&D project manager of Bühler’s grain milling division. “The grain arrives at the roller mills after various sorting and cleaning stages. In the mills it passes between pairs of rollers pressing against each other. The grinding effect is created by the pressure and the fact that the two rollers in each pair rotate at different speeds.”
Bühler’s latest roller mill model is the Newtronic, launched in 1999. “In the Newtronic, available in four – roller or eight – roller versions, we have incorporated all the grain – grinding experience that Bühler has accumulated over the past century. In the short time since its introduction, we have sold more than 1,000 of these machines to customers in more than 40 countries,” says Hohermuth.

Quick roller change
“Perhaps the most significant new feature of the Newtronic is the short time needed to change rollers in a machine. This can make a big difference, because each pair of rollers has a different task. In other words, when one roller mill is stopped, the whole milling section has to shut down,” Hohermuth explains. “A modern grain mill handles anywhere between 100 tonnes and 1,000 tonnes in a 24 – hour day, so you lose at least four tonnes of production per hour of downtime, and possibly much more.
“In a conventional roller mill, changing the roller pack used to take four to five hours. With the Newtronic, it’s a 60 – minute job. The improvement is dramatic.”
Other features include a gravimetric feed system that measures incoming grain as it flows across the inlet, assuring consistent grinding, and design innovations that reduce condensation and noise levels.
The feed module swings out for easy cleaning, an important feature considering the food processing industry’s stringent hygiene requirements. Maintenance requirements are reduced as well, largely because of central lubrication of the spherical roller bearings and the lifetime lubrication of the feed rolls.

Service life decides
Bearing requirements are critical in roller mills. A four – roller Newtronic mill has eight main spherical roller bearings; an eight – roller mill has 16.
“The criteria for specifying the bearings to be installed in roller mills are multiple,” Hohermuth says. “Top of the list is overall service life  –  a bearing is expected to have a working life of 50,000 to 60,000 hours. However, low maintenance requirements, reliability in arduous working environments, low – vibration operation and low internal friction are all vital considerations. Low internal friction matters not only because it minimises rolling resistance, but also because low friction means cool running. This, in turn, means a longer service life and less need for lubrication.”
Oh, yes  –  and what about that al dente tester? A Bühler engineer developed this ingenious handheld instrument to let an operator make a standardised, calibrated measurement of pasta texture, an attribute that depends not only on how long the pasta was cooked but also on the quality of the grain it was made from.
The user presses a spring – loaded plunger to open a small circular aperture in the instrument’s head, and threads a piece of spaghetti through the aperture. When the plunger is released, the spring forces it back towards its original position, but the spaghetti in the aperture prevents it from returning all the way. The distance the plunger returns is a measure of the pasta’s firmness  –  its al dente – ness.