» Inland shipping on a high level 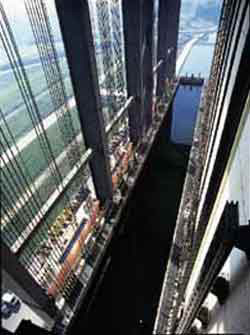 Inland shipping on a high level

Bearings get a lift
SKF bearings can be found in all of the electromechanical equipment for the Strépy-Thieu boatlift. For example, there is one 500-millimetre spherical roller bearing, 240/500 CA/W33 in each of the 32 driving drums, and two 23048 CC/W33 spherical roller bearings in each of the 224 pulleys.
In addition, SKF supplied bearings for the six lifting mechanisms used to raise the 10 doors that keep the caissons accessible and watertight and the upstream and downstream bays. That makes a total of more than 800 large and medium-sized bearings in the entire installation.
“We were able to supply all these bearings because we were involved from the beginning in the calculation of the bearings’ dimensions, in their integration and in the calculation of lubrication conditions,” says Michel Cornélissens, head of marketing at SKF Belgium. “In a project of this size, the immediate and permanent availability of professional and coherent technical assistance is a service that none of our competitors has been able to offer.”

It may look like a temple, but it’s actually a 73-metre boatlift that will give Belgium new transportation options. The lift is part of a water transport system that will bring benefits for both business and tourism.In the early 1950s, Belgium began to modernise its waterways to meet the needs of modern commercial canal traffic. By 1963, improvements were under way to the Canal du Centre, which stretches 18.6 kilometres from La Louvière to Mons in the Walloon region of Belgium, and links several European cities to the sea.
But engineers faced a unique problem: a rise of more than 70 metres between the basins of the Scheldt and Meuse rivers. Their solution is the Strépy-Thieu boatlift. Rising from the ground like a futuristic monument to transport engineering, this lift dominates the landscape and is the culmination of years of careful planning and skilled labour.
Until 1963, this charming stretch of canal had a maximum capacity of 300 tonnes, and dealt with the rise by means of two locks and four hydraulic lifts constructed in the 19th century. The lifts, each rising 17 metres, are a classic example of simple engineering using a balance system, fully powered by water.
But the canal’s winding path through this densely populated area proved impossible to enlarge, and a new stretch of canal had to be dug – parallel to the old waterway and wide enough to take the new European-standard 1,350-tonne ships as well as the old 300-tonne barges.

Multiple partnership
Given the scale of the project, the Belgian state awarded the contract to Ascacentre, a consortium of eight contractors united for the duration of the project. Several proposals were put forward for projects to overcome the change in altitude. These included an inclined plane with either a 5 percent or 10 percent slope, or a series of locks. But after lengthy studies comparing several solutions, for technical and economic reasons the experts chose a revolutionary 73-metre vertical boatlift, with two independent caissons.
Work on the Strépy-Thieu boatlift started in 1982, and now is nearing completion. This remarkable structure, 130 metres long, 81 metres wide and 117 metres high, is simplicity itself. Both commercial and tourist traffic will arrive by the 200-metre-long upstream aqueduct or by the downstream canal. Two independent water-filled caissons, each of which weighs 8,000 tonnes and is 112 metres long, 12 metres wide and 8 metres deep, will carry canal traffic to the other level. Each caisson can move a 1,350-tonne boat a vertical distance of 73 metres in six minutes, travelling at 20 centimetres per second. The entire procedure, including all safety checks, will take only 40 minutes, compared with the more than five hours needed to negotiate the same distance on the old canal. At the top of the structure, the machine room houses all the electromechanical equipment used to lift the caissons. Each caisson is suspended on 144 cables, of which 112 are suspension cables in eight groups of 14, with each group linked via a pulley to an 800-tonne counterweight. The remaining 32 cables are used for control.

Exceptional dimensions
The caissons are moved according to a simple system like that used in an ordinary passenger lift, only on a much bigger scale. “Everything used in the project already existed, so the only thing that’s exceptional in the construction are the dimensions,” says Gustaaf Mampaey, a bridge and road engineer at the Walloon Ministry for Equipment and Transport. “All the events encountered during construction had been previously experienced, but just not on this scale. For example, the cables are 85 millimetres in diameter, which you can’t normally find. So when they were made, a special machine had to be constructed to test them,” he explains.
The Strépy-Thieu engineers also had to consider meteorological and geological challenges: “We are in an area prone to strong winds, and there have been small tornadoes in Belgium over the past few years. We were concerned the roof might blow off, so we had to build wind resistance calculations into the plans,” says Henri Brouet, chief engineer of bridges and roads at the ministry. “We are also in an earthquake zone – not like in San Francisco, but there is still a risk of tremors that can reach 5.5 on the Richter scale, so the lift was constructed to withstand the possible effects,” he says.

Investors and tourists
The lift makes a vital contribution to the Walloon economy, and the canal is expected to be able to move 10 million tonnes per year, compared with between 500,000 and 1 million tonnes on the old waterway.
“Significant infrastructure like this invites investors to the region,” says Brouet. “There is high unemployment here, and this workforce is available to companies seeking to create business in the area. We have also just created a new management structure for the waterways in the area, which will improve load transfers between waterways, road and rail.”
Moving merchandise by water also provides a “green” alternative to less ecologically friendly transport options. Says Brouet: “One 1,350-tonne boat can hold as much as a 3.5-kilometre-long convoy of lorries on the road. In addition, boats are the only means of transport not at saturation point; we can double it or triple it. Water as a means of transport is the wave of the future.”
Ascacentre’s contract includes constructing both the boatlift itself and the canal upstream and downstream of the lift. Just over half the funding for the BF 25 billion (USD 650 million) project came from the Belgian state, which contributed BF 13 billion. Another BF 7 billion came from the Walloon regional government, with the remaining BF 5 billion supplied as a loan from Sofico, a company that provides financing for infrastructure in the French-speaking region of Belgium.
The European Union provided a further BF 42.5 million to develop the site as a tourist attraction. Visitors will be able to ascend the construction by passenger lift to a panoramic room with spectacular views across the landscape, and tour an exhibition space overlooking the machine room. “The new lift, with its industrial role, will also have an important role in tourism,” says Brouet. Meanwhile, the old canal with its historic lifts, which UNESCO recently classified as an historic site, is also drawing tourists to the area.
The project is nearly complete, with only a few tasks left to finish, including the interior of the tower and the tourist areas. The lift’s inauguration is scheduled for May 2000, and the modernised canal is due to open in 2001.

Anna McQueen
a journalist based in Paris
photo Ian Sanderson