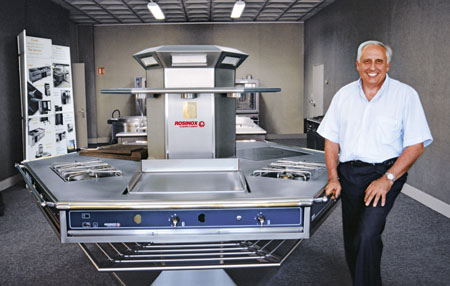 The Rosinox companywas established in 1837 in Bourges, in the Berry region of central France, and began life as the Rosières iron foundry. The company began producing kitchen equipment in 1869, supplying cast iron ranges for chateaus. In 1999, the Milan-based ALI foodservice equipment group acquired the professional catering equipment division of the company. Today, Rosinox employs some 135 people and has an annual turnover of 15 million euros.

“At Rosinox we make professional kitchen equipment for institutional catering establishments, including centralized kitchens, hospitals, company restaurants, school kitchens and commercial restaur-ants,” explains Angelo Chiessi, president of Rosinox and its sister company, Friginox, which produces chillers and freezers. “But we have always been an avant-garde company, producing extremely high-performance products that are very well-constructed and that ensure performance over time.”

A Rosinox installation ranges from the simplest oven, retailing at 8,000 to 10,000 euros, to a complete installation that could cost up to 400,000 euros. Single cookers such as the hexagonal Royal Chef range can cost as much as 60,000 euros. The Rosinox product range has more than 500 products, including cookers and ranges, deep-fat fryers, bratt pans, stockpots, pasta cookers and bain maries, and the list lengthens every year. The average lead time is four weeks. “France is our biggest market,” says Chiessi. “It is the birthplace of grande cuisine after all. But we sell worldwide to a unique clientele looking for high-performance equipment. We sell through distributors, but people often come directly to us.”

Until now, mixers have only ever been integrated into circular pans. In the past, mixing food in a bratt pan had to be done by hand, using a paddle. The advantage of this product is that it can be used for sautéing as well as for cooking more liquid preparations with sauces. The mixer can be removed to leave the space free for cooking, and, using SKF’s linear electric actuators, the pan can be tilted to pour off the contents. “When we tested it, we made 180 kilograms of beef bourguignon in it – enough to feed a whole school,” Chiessi says.

French law statesthat industrial kitchens must take 120 minutes to bring the internal temperature of a dish down from 75 to 10 degrees Celsius. To do this, Friginox has constructed a range of blast-chillers and has recently registered a new patent for its i-chilling process. The latest Friginox chilling units – which can take up to 560 kilograms of prepared food – can calculate the weight, thickness and consistency of the food and automatically set the optimal speed and temperature to use without forming ice crystals.