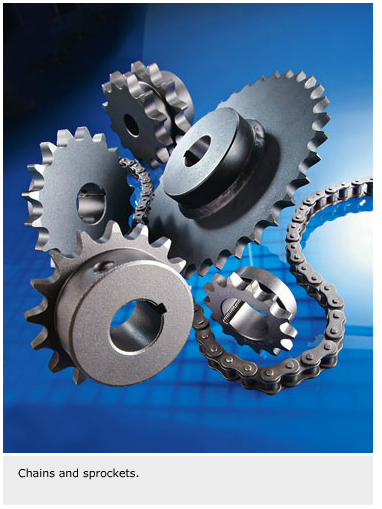 Power transmission productsplay an important role in overall bearing performance. They are the vital link between moving parts in equipment, and industry as a whole spends about twice as much on these products as it does on the actual bearings.

By creating its own range of power transmission products, SKF can now offer products that are well matched and give engin-eers a wide design choice according to performance and cost considerations.

SKF is likely the first bearing manufacturer to consolidate the sales and supply of power transmission products in this way. The range, to be sold under the group’s existing brand, is the result of a thorough analysis of the market and customer
requirements.

Bringing power transmission products under a single brand offers significant user benefits apart from the confidence that comes from a well-known brand. SKF can provide a convenient single supply source for products and services with a large stock of products. This, in turn, offers the chance to simplify logistics to end users and reduce administrative work.

SKF already has its own sophisticated worldwide warehousing and logistics systems through which power transmission products can be supplied. This currently can provide access to more than 8,000 power transmission items (and in the future even more), which enables distributors to have smaller stocks and less capital invested in inventory.

Power transmissionand bearings work together in many industries, including food and beverage, oil and gas, pulp and paper, textile, steel, packaging, mining, mineral processing and cement, agriculture and material handling. Many bearing problems and failures can be identified through knowledge of power transmission. Combining an understanding of bearing systems with power transmission gives SKF the opportunity to enhance the support it gives to users.

The SKF power transmission range covers most common types of products, which can be divided into six main categories – belts, pulleys, chains, sprockets, couplings, as well as bushings and hubs. Some of the products are in separate groupings that have different dimensions and different fixing methods and are made from different materials. There are also products that have special characteristics, needed for specific types of applications. All SKF power transmission products are identified by an SKF specific designation prefix. Apart from that, the designation follows international standards for easy recognition and cross-referencing.
SKF belts are branded SKF and carry the designation prefix “PHG.” Depending on the belt profile, they are classified according to the classic V-belts, wedge and narrow wedge belts and hex belts.

The wedge beltis a later development of the classic belt and is a stronger belt when compared with the classic V-belt. The narrow wedge belt is a high-performance wedge belt. The hex belt has a cross section of a double section classic V-belt. It is designed for applications where one or more of the driven pulleys will rotate in different directions.

There are other more specialized types of belts such as ribbed belts, banded belts and timing belts.

Multi-ribbed beltsare the newest addition in the belting range. Ribbed belts require less energy to bend around the pulleys and can transfer power more effectively to the driven pulley. Banded belts consist of belts joined together in a set of multiple strands. Banded belts virtually eliminate the negative effects of vibrations and are typically used in applications with pulsating loads.

Timing belts, also called synchronous belts, are more specialized types of belts. For such belts, the drive comes from the leading edge of the belt teeth. This type of belt is considered a direct-drive belt.

Finally, in this power transmission range, there is the high-torque drive (HiTD) belt, a heavy-duty timing belt for demanding applications.

SKF pulleyscome with a taper bush or
pilot bore and are identified by the designation prefix “PHP” under the SKF brand. Unlike the products offered by many of SKF’s competitors, the group’s pulleys are packed in boxes (except for large-size pulleys) and cover the most complete range.

The range includes a number of special chains that are made of different materials or have additional attachments.

Transmission chainsprovide a smooth, efficient flow of power with low friction as well as a pitch-by-pitch drive, which is essential for synchronized drives. Heavy-duty chains have a greater ultimate tensile strength, compared with standard chains. Typically they are used for applications with long-life requirements that are subjected to shock loads. Double-pitch chains are suitable for applications where there is a long centre distance between the sprockets. The load-carrying capacity is almost the same as for standard chains. This results in a lighter and less expensive chain. Engineering chains refer to chains made with very large pitch dimensions. The silent chain runs quietly and is more flexible than conventional roller chains. The chain is capable of carrying more power per chain area than the standard roller chain.

Oilfield chains arenormally identified by the special crook shank pin that holds the chain together. Oilfield chains are
sophisticated products that are supplied by only a limited number of suppliers on the market.

Leaf chains areused worldwide. They have high fatigue strength, long service life, maximum resistance to wear and a com-pact design. Conveyor chains are manufactured to a wide variety of applications serving industries all over the world.

All these chains are classified according to the two main standards for chains, the American standard (ANSI) and the British standard (BS-ISO).
Each chain comes with a standard connecting link. A different type of connecting link, called an “offset link,” is available upon request.

Standard chains are packaged and branded SKF, while large chains are packed according to size and order quantity. The designation prefix for this product class is “PHC.”

SKF sprockets are identified by the prefix “PHS.” All are branded SKF and are, except for large-size sprockets, packed in boxes.

Couplings have the primary function of connecting two shafts that turn in the same direction and on the same centre line. Typically couplings are divided into high-torque and low-torque couplings.

The SKF flex couplingprovides easy installation, excellent resistance to shock loads and vibration dampening. It is virtually maintenance-free and can accommodate angular, parallel and axial misalignment. The FRC coupling has a relatively high load-carrying capacity and can dampen moderate shock loads and vibration. Its interlocking design makes it easy to install.

The SKF jaw coupling is a coupling for maintenance-free operation and easy installation. It is suitable for moderate shock loads and small vibrations, while the gear coupling is capable of transmitting high torque at low speeds. This design can accommodate parallel and angular misalignment as well as axial movement.

Both bushings and hubs are branded SKF and are packed in SKF boxes together with their respective screws and mounting instructions.