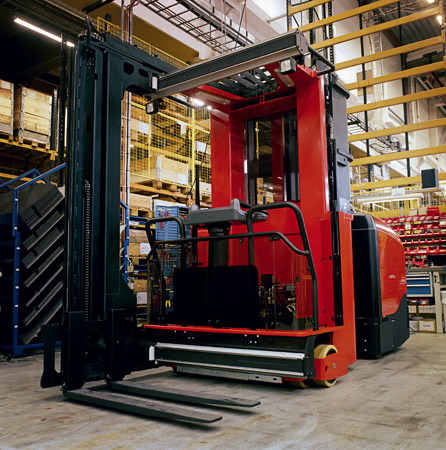 Globalization and specializationcoupled with new models of supply chain management and a surge in consumer demand for household gadgetry have made efficient warehouse management the competitive edge that will enable manufacturers and retailers to stay on top.

In consequence, in the distribution sector, the demand for trucks and other warehouse equipment is growing at a faster rate than the economy at large. “Goods are transported in smaller quantities but more frequently, which increases the demands placed on material-handling equipment,” explains Håkan Schill, vice president for supply at BT Europe in Mjölby, Sweden.

As one of the world’s leading warehouse truck makers, BT’s ambition is to develop equipment that helps its customers realize the full rationalization potential offered by modern logistics, while at the same time meeting new standards in ergonomics, computer interface options and power consumption efficiency.

A prime showcase is offered by the company’s latest combi truck, the flagship model called the Vector C15, which took two and a half years to develop at a cost of more than 4 million euros. Its name suggests it would be at home on a Star Wars set, and its sleek orange-and-black exterior, which harbours computer power as well as well-oiled muscles, completes the picture. With an ability to lift 1.5 tonnes 10 metres straight up or one tonne 14.3 metres up while operating in severely cramped areas, the C15 literally takes warehouse trucking to new heights.

The C15 is called a “man-up combi truck,” which means it is designed to handle entire pallets as well as single-item picking. It uses a main lift to raise not only the load but also the cab where the operator stands or sits, and it has an auxiliary load handler for fine positioning at the storage location or while shelf picking. Because the operator spends most of the work shift in the truck, BT has put a lot of effort into designing a smooth, comfortable and secure driving experience.

“The C15 isn’t just the most intelligent truck we have ever built,” says Daniel Nåbo, the man responsible for the ergonomics of the C15. “We have also worked very hard to build in a sense of sheer driving joy and operator comfort.”

Indeed, modern warehouses don’t exactly come with a lot of leeway in terms of free floor space. Setups with 60 extremely narrow aisles, where shelves soar 15 metres, are not unusual. Manoeuvring a C15 truck – which may weigh 10 tonnes when fully loaded – in such a tight environment is nevertheless easy and secure, thanks to the built-in guidance system that responds to a guide wire or rails in the floor of each narrow aisle. In addition, whenever a narrow aisle is exited, a small steering wheel is activated, which the driver uses to control the articulated steering (but not the wheels).

Adding to operator safety is a built-in system that automatically and continuously measures the weight of the load and adjusts vehicle speed and fork speed. This is BT’s Optipace System, which Corke explains is used to adjust the truck’s speed to the load’s weight and elevation. “This standard feature on all our very-narrow-aisle models makes sure that the truck performs safely and effectively at all times,” he says.

BT also offersinventory simulation software that helps the customer optimize the size of the truck fleet and how much each vehicle is used. To make sure that the truck and its operator are able to make the most of the company’s warehouse management system, the C15 is fitted with a thin-client PC inside the oper-ator’s cab. Information such as suggested order-picking itineraries, current load specifics and inventory status appear on the colour screen. The PC is able to run any Windows application and interfaces wirelessly with the company’s business system via wireless local area networks (WLAN).

Corke explains the benefits: “The paper-based order-picking lists of yesterday are being replaced by computer-based documents and online access to integrated information databases. The documents list the information for the driver on where to go and what to pick, enabling him or her to fill two or three orders simultaneously to make efficient use of each round.”

Two stable handlebars have been added that are fitted with a “dead man’s handle” in the form of a sensor pad that reacts to the moisture of the driver’s skin. “This removes the need for prolonged and possibly muscle-straining manual activation,” says Nåbo. “The truck won’t move an inch when the driver releases the hands from the pad.”

Meanwhile, the energy-saving features of the C15 permit long shifts without the need for battery recharging. The patented BT Advanced Lift System is based on a unique combination of two technologies that results in significant energy savings over conventional trucks, according to Corke. “Forty to 60 percent of the energy used when lifting a load is saved by the integrated hydraulic and gas-pressure lifting system combined with electrical energy regeneration, which uses precise electronic control for seamless and smooth operation,” he says. “Two full shifts can be operated on a single recharging of the battery by the combination of a counter-balanced main lift system with regeneration. Energy regeneration from driving as well as lifting means more work per battery charge.”

The gas-pressuresolution, which is unique for the C15, uses precompressed nitrogen in a sealed accumulator. Energy is removed from the compressed gas during lift. When the truck’s load is lowered, the nitrogen is recompressed and the energy stored in the process is used to power the next lifting movement. Corke says that the energy thus conserved is equivalent to the weight of a major part of the mast, the cab and the fork unit. “This means that the lift motor only has to carry the weight of the actual load, and the savings in time as well as energy is considerable,” he says. “The lifting is faster, and we can use a motor that is only half the size of motors in comparable trucks on the market.”

The SKF AHE-5512 Steering Unitused in the Vector C15 includes an SKF Explorer 6205 deep groove ball bearing and two sensors. Each of these sensors provides two output signals with 64 pulses per revolution on each signal. The two output signals offset in phase enable determination of the direction of rotation.

The C15 also uses SKF sensor bearing units for the positioning of the height of the turret head.

How does a sensor bearing work?

A magnetic impulse ring divided into a sequence of north and south poles is attached to the inner ring of the bearing. The outer ring carries a sensor body with embedded Hall cells. When the inner ring rotates, the impulse ring moves past the stationary sensor ring, generating a magnetic field of changing polarity. The sensor outputs a pulse, its frequency depending on the number of polarity changes per second. Via a connection cable, the signal is transmitted from the SKF sensor bearing unit to an electronic processing unit, which evaluates the signal and provides application-specific information.

Sensor bearings were first developed for anti-lock breaking systems in cars, when “intelligent bearings” were required to record the variations in the circumferential speed of the wheel.

The steering unit of the Vector C15 was developed in cooperation with SKF. It contains mechatronic machine components covering the field of both sensor and bearing engineering, combining versatile deep groove ball bearings with sensor units shielded from external influences.

The sensor components, bearing, housing and steering axle are mechanically attached to each other, forming an integral ready-to-mount unit.