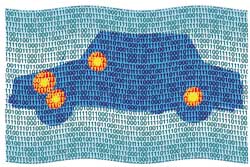 From aircraft to cars
SKF has announced an agreement with the Italian Brembo Group to jointly develop electro-mechanical brake-by-wire systems for the high-performance vehicle market.
Transferring “by-wire” technology from aerospace to the automotive industry is no simple task. The electro-mechanical actuators for cars and trucks will demand designs that require little or no maintenance, a challenge for the design engineers looking at sealing, lubrication and materials selection. And of course there is the scale of production. The automotive industry will require volumes never seen in aerospace.
The SKF Group has a close involvement in “fly-by-wire” products through SARMA, SKF’s airframe component specialist based in France. SARMA is a major supplier of actuator and related devices to the Airbus Consortium, the multinational group developing and manufacturing the A300-A600 families of airliners.
Within SKF’s Automotive Division, a dedicated Drive-by-Wire business unit has been established to concentrate SKF efforts on mechatronic, by-wire activities for the global automotive industry.

Drive-by-wire is a rapidly developing technology for motor vehicle control. Based on remote electrical actuation of vital functions, it offers new options for design and driving.Within five years, it is likely that engineering teams will be designing new vehicle platforms in which all three primary controls – accelerator, brakes and steering – will be electrically actuated under electronic control. Collectively, they are known as drive-by-wire.
At the same time there will be an upsurge in the intelligent safety systems that intervene and take over when they detect that the driver has done, or is about to do, something dangerous. Further into the future we can envisage long “trains” of vehicles safely cruising down the motorways at high speed, invisibly linked by electronic signals being processed by ever more powerful combinations of sensors and controllers.
For car designers and stylists, drive-by-wire systems have the potential to transform the way passenger compartments are designed. Gone will be the costly hydraulically assisted mechanical packages that actuate and assist both brakes and steering. Along with them go the bundles of wires that sit behind the instrument panel, because this generation of cars will be using electronic and optical data buses. These distribute control signals from the variety of control units that look after engine management, instruments, safety systems, windows, comfort features, heating and ventilation, lighting and so on.
Removing the mechanical linkage between the steering wheel and the steering rack will not only enhance design and crashworthiness (because there is no steering column to push through into the driver’s chest), it will massively simplify and lower the cost of switching between right-hand and left-hand drive. Foot pedals, too, can much more readily be swapped from one side of the car to the other because their only connection to the systems they control will be electrical. This capability will become increasingly relevant as the globalisation of the vehicle manufacturing sector continues along with the expansion of markets in the “new economies” of India, China and other Asian countries.
Drive-by-wire systems covering throttle, brakes, steering and chassis control are well advanced now. Throttle-by-wire is now commonplace and it is difficult to imagine that a team developing a new engine or modifying an existing one would contemplate a mechanical linkage in place of an electronic one. The benefits are simply too great in terms of being able to optimise injection and ignition signals with throttle position, all of which have implications for car performance and fuel economy.

Integrated systems
Then there is the ability to interface throttle control signals with other systems such as cruise control, rev limiting, automatic transmission (to trim torque to achieve silky smooth gear-shifting) and vehicle stability systems. The most advanced of these take control of the throttle, along with the brakes, to prevent a vehicle from sliding or, worse, rolling.
Brake-by-wire is awaiting vehicle applications. Delphi Automotive Systems has had its Galileo system ready for around three years, while other suppliers, including Bosch, TRW and Continental-Teves, have all demonstrated the technology. Basically the foot pedal sends an electronic signal to the brake unit which is actuated directly either electro-mechanically or electro-hydraulically.
The electro-mechanical route is the purest, in engineering terms, requiring just a servo motor and geared actuator while eliminating environmentally unfriendly hydraulic fluids. Electro-hydraulic systems, on the other hand, have the advantage of using tried and tested brake mechanisms, slave cylinders and calipers. In either case, the trick is to tune pedal travel and pressure to braking performance, and much current development is focused on this requirement.
The availability of an electronic signal from the braking system to interface with ABS and chassis control systems at low cost makes brake-by-wire an extremely attractive proposition within the industry. Current concerns are customer confidence in systems where there is no direct mechanical or hydraulic link to the foot pedal and a lingering fear of product liability responsibility in the event of failure. However, all the systems designed so far have the electrical equivalent (or better) of the hydraulic dual circuit and a backup against total power failure. It cannot be long before we see such systems on the road.
Steer-by-wire systems require an even greater leap of faith by the car-buying public, along with an amendment to the ECE79 regulation on Vehicle Safety Standards that currently requires a mechanical link between the steering wheel and front wheels. In a braking system, you can argue that “brakes on” is a fail-safe condition, but there is no such condition when it comes to steering.
Yet the advantages of steer-by-wire are irresistible. In normal steering systems the wheels roll truly only in three positions – straight ahead and when turned through a specifically choosen angle to the right and left. With a separate electric motor controlling each steered wheel (and these could include the rear wheels) and a control unit that responds to a full set of speed, yaw and accelerometer sensors, perfect Ackermann geometry (true rolling motion) can be maintained throughout the steering range, irrespective of vehicle speed and cornering force.

Comfort and safety
Other systems favour a single actuator and mechanically linked wheels. In either case, the interface with safety and chassis stability systems becomes relatively straightforward, making cars potentially more comfortable and safer to drive.
The aerospace industry has shown that by-wire systems can be made to be extremely reliable. Signals are triplicated, constantly compared and a “majority voting” strategy applied in the event of disagreement.
Two recent developments show the automotive industry’s determination to apply drive-by-wire technology. German ZF’s hybrid steer-by-wire system incorporates a hydraulic backup that would take over in the event of an electronic systems failure. The advantage here is that the steering column is eliminated but replaced by a permanent, though normally unused, hydraulic link.
The other development is Delphi’s Quadrasteer technology. This system, available now and scheduled to be applied to a truck in 2002, is a true “by-wire” system in that on the rear axle it electronically controls the direction of the wheels. It operates in two modes. At low speeds, the rear wheels turn in the opposite direction to the front wheels, shortening the turning circle of the vehicle. At higher speeds, the wheels turn in the same direction as the front wheels, dramatically improving the stability of the vehicle in sharp manoeuvres such as sudden lane changes. And interestingly, the company has an electronic system under development that will allow ±3 degrees of front-wheel steering to be initiated, irrespective of driver input, to compensate for over- and under-steer, side winds and slippery surfaces.
It is easy to see why the car industry and its suppliers favour drive-by-wire systems. They all interrelate, and only when throttle, brakes and steering are all in place will it be possible to take full advantage of the economies, comfort and safety they have the potential to deliver. However, with all the R&D expenditure now being committed to systems, it can only be a matter of time. And not very much time.