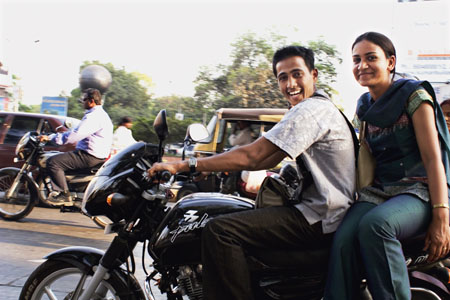 NH Hingorani, Bajaj Auto’s vice-president of commercial operations, says that this shift forced the company to take a hard look at the market and move its focus from scooters to motorcycles. Now, he says, the company has the No. 1 position within sight again, and he is happy with the progress it is making. “We have a top slot in both the premium and entry segments,” he says.

The company’s motorcycle production is growing at a rate of 35 percent per year, more than twice the industry growth rate, Hingorani says, taking Bajaj Auto’s motorcycle market share to approximately 33 percent in February 2006 – an all-time high for the company.

But, says Hingorani, reinventing itself as a motorcycle manufacturer was tough. In 1996 motorcycles made up only 10 percent of Bajaj Auto’s business. To compete, the company developed a new, more fuel-efficient line of motorcycles.

Meanwhile, it pruned its suppliers from 800 to today’s 200. “We wanted to retain only quality-conscious suppliers who could contribute to a faster development of new products,” Hingorani says. Fewer suppliers meant the company could consolidate its purchases.

In addition, the company built a new plant in Chakan, in western India. It was the realization of a vision that Managing Director Rajiv Bajaj had of a world-class manufacturing plant that could produce vehicles of the highest quality. The Chakan plant was launched in 1999.

At the same time, Bajaj Auto introduced the Japanese practice of total productive maintenance, TPM, at all their plants. TPM is a manufacturing-led initiative that emphasizes the importance of people, a “can-do” and “continuous-improvement” philosophy and the importance of production and mainten-ance staff working together. In addition to its plants, the company extended implementation of TPM to 30 core vendors.

Sandesh M Tamhane,senior manager of the Chakan plant, explains the new work culture: “From the first day, we hired only ‘fresh’ people, not ‘experienced’ people,” he says. “Now 70 percent of the staff of 950 people are diploma engineers – people who can continually contribute to improvement activities. We don’t want to have to supervise; we want the workforce to be very lean on every front.”

In 2002 Bajaj Auto’s research and development department came up with a design for a new bike, the Pulsar motorbike. In earlier products Bajaj Auto had collaborated with Kawasaki, but this time the design and production were accomplished internally. Pulsar sales have made Bajaj Auto the leader in the premium segment for the past four years.

The company’s R&D has also worked on DTS-i technology, which involves using twin spark plugs and a digital ignition that together increase engine
performance.

“This technology has not been applied in motor-cycles anywhere else in the world,” Hingorani says. “It gives our customers better fuel efficiency and a comfortable drive.”

Bajaj Auto has learned to react quickly to market changes. Now each model is updated twice a year, and plans are in progress for heavier bikes.

“It’s an integrated corporate strategy, starting with putting products on the market that the customer wants,” says General Manager Arvind Gupta. “We are focusing on customers’ needs and are continually improving our products.”

“Consistency of quality is the most important factor,” N H Hingorani, Bajaj Auto’s vice-president of commercial operations, says. “We were never tempted by cheap bearing offers.”

SKF keeps pace with Bajaj Auto’s new product launches and product upgrades and works with the company’s research and development department even during the concept stage of a new product. The bearings SKF supplies are often customized for specific vehicles. SKF supplies its bearings as needed, sometimes making multiple deliveries during a single shift to keep the inventory low at Bajaj Auto.