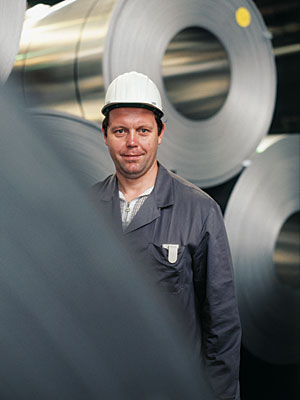 High-quality cold-rolled steel requires roller perfection, so that the finished product can go out to the world requiring no further treatment.

At the Düsseldorf-Benrath plant of Germany’s ThyssenKrupp Nirosta cold-rolling mill, bearing maintenance is of prime importance.
This is one reason the mill entered into a maintenance agreement with SKF. Under the agreement, worn bearings are sent for refurbishment to SKF’s Industrial Services Centre in Steyr, Austria. Klaus Süsens, maintenance engineer at the plant, says that working with SKF has helped the mill save some 400,000 euros in the past four years because, in this case, repairing the bearings can be more economical than buying new ones.
In the past Nirosta had no alternative but to throw worn bearings away, he says.

If a backing bearing can’t refurbished, SKF supplies a new 314833B or 316388B caged backing bearing as a replacement, regardless of the origin of the original bearing.
An additional benefit, in Süsens view, is that SKF delivers the bearing with an accurate measurement of its diameter after repair, so that it is now much simpler to order the bearings on the shaft to achieve the desired convex arrangement. Operations manager Klaus Lange says, “I don’t have to worry about problems with the backing rolls now.
I can concentrate on the quality of the product, which is, after all, my real job.”

As it emerges from the finishing rollers, the stainless steel is like water – clear and smooth, an Alpine lake on a sunny day, with not a breath of wind to ruffle the surface. There’s no bottom, but the reflection is crystal clear.

In fact, the steel is rushing past at 200 metres a minute, and the impression of stillness remains only if you concentrate on the unblemished surface. Lift your eyes to the machinery that is reflected in the steel, and it is humming and whirring as it should. This is after all a factory – a cold-rolling mill, one of four in Germany operated by ThyssenKrupp Nirosta, a subsidiary of ThyssenKrupp Steel, in Düsseldorf-Benrath.

The mill, with more then 600 employees, specialises in making 3D stainless steel sheet – a grade that has such a perfect finish that it needs no further treatment. Klaus Lange, the mill’s operations manager, says, “While other grades need to be painted or coated, 3D can be used as it is.

The demands of our customers for the quality of that finish have been increasing, and we’ve been able to meet those demands.” Customers range from manufacturers of kitchen equipment to the car industry.

Giant rolls of steel
More than 250,000 tonnes of steel a year are delivered to the plant on huge rolls (called coils), which will be rolled over and over again until the sheet is reduced in thickness by 80 percent from, let’s say, 2.5 to 0.3 millimetres thick.

The process starts with heat: The coils are annealed by being heated to 830 degrees Celsius to remove the inner tension in the molecular structure caused by the rolling mill process in the original manufacture. The coils are then pickled in sulphuric, nitric and hydrofluoric acids to remove any impurities.

Then the coils are loaded into one of the factory’s two rolling mills – one takes sheet up to 1,300 millimetres in width, the other up to 1,600 millimetres – where the steel will be sent backwards and forwards as many as 13 times.

Force and precision
Tadeusz Sendzimir, a Polish engineer, is the father of today’s cold-rolling mills. He is credited with developing a configuration of rolls whereby the two rolls applying pressure to the work roll were themselves supported by three support rolls and four backing rolls mounted in a very rigid monoblock frame. Sendzimir produced his first 20-roll mill in Poland in 1933, and by the 1980s, 85 to 90 percent of the world’s stainless steel sheet was passing through Sendzimir rolling mills.

The process requires flawless rolls. “The slightest irregularity in the rolls will have an effect on the finish, so the assembly has to be adjusted to micrometre tolerances,” says maintenance engineer Klaus Süsens.

The work rolls, which apply forces of up to 1,000 tonnes to the sheet, have the highest demands placed upon them. “Each coil may require four to six changes of work roll, to ensure that a slight irregularity in its surface does not damage the perfect finish of the steel,” Süsens says.

The withdrawn rolls are ground down by a couple of hundredths of a millimetre and returned to use. In the course of its life, the diameter of a work roll on the 1,600 mill may be reduced – shave by shave – from 104 to 82 millimetres.

The heavyweight members of the Sendzimir team are the eight backing rolls, each of which is a series of up to seven bearings strung on an axle and separated by polyamide rings from supports that are attached to the framework. The bearing outer rings have to be unusually thick, since they are not supported by a housing.

The bearings are not all the same size: Differences in diameter are used to make the roll maybe 10 micrometres thicker in the middle than at the ends.

This convex arrangement compensates for the tendency of the roll to respond to the higher load in the middle. Each axle can be adjusted using a cam, while the two inner axles on each side have individual cams for each bearing.

Although the basic characteristics of the Sendzimir mill haven’t changed since the 1930s, at Nirosta there’s a continual effort to improve the details. “We have to be ahead of the customer,” says mill manager Lange. “We can’t change a mill from one day to the next, so, as demands for precision increase, we have to have already built that in through improved technology.”

When the coil emerges from the rolling mill, it is washed in a detergent solution and reheated to anneal it a final time. This time it is rolled out to travel through a long oven at more than 1,000 degrees Celsius in a protective atmosphere of hydrogen and nitrogen, to prevent any danger of discoloration, after which it is shock-cooled.

The final finishing is done on a mill whose take-up coil moves slightly faster than the supply coil, slightly stretching the sheet to ensure that any remaining irregularities are removed.

The very highly polished work rolls provide that “Alpine lake” perfection, which gives the 3D steel its special quality. Finally it’s rolled with an intermediate layer of paper to protect the surface before being wrapped and prepared for delivery.

Bright future
Lange says there is a good market for stainless steel of the quality produced by Nirosta. “Even with the current slowdown, the market is still growing by 3 to 4 percent a year,” he says. “Earlier it was around 6 percent, and we hope to get back to that.”

With increasing quality expectations on the part of consumers, many products that  were formerly made of normal steel are now produced in stainless. But competition is hard, with other companies also producing good quality at competitive prices. However, Lange says, “we claim market leadership as far as quality is concerned, and that means we are not entirely at the mercy of the market when it comes to setting our prices.”

The high cost of producing in Germany has to be offset by the bonus of higher quality, and Lange is confident that ThyssenKrupp Nirosta can continue to deliver that.