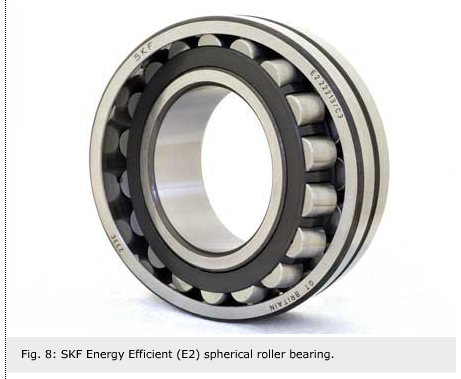 A win-win for manufacturers and the planet. With their potential to reduce costs and improve machine operation while reducing energy consumption, SKF Explorer bearings and SKF Energy Efficient bearings offer a win-win advantage for manufacturers and the planet. By se bild hting friction, these two performance classes are redefining and expanding the goals of sustainability from a concept applied to conservation of resources to one that also applies to preserving the bottom line.

SKF EXPLORER BEARINGS: FOR HEAVIER LOADS
SKF Explorer bearings (se bild . 1) have been developed to run cooler, smoother and longer than standard rolling bearings in heavy load applications. These bearings reduce environmental impact by enabling downsizing and by reducing both lubricant and energy consumption. Just as important, this performance class of bearings can reduce the need for maintenance and contribute to increased productivity.

The rolling elements of SKF Explorer bearings are manufactured to extremely close tolerances to reduce vibration levels and equalize load distribution. Cages are enhanced to improve guiding of the rolling elements and optimize the effect of the lubricant while lowering heat, friction, noise and vibration levels. The surface topography of the SKF Explorer bearing rolling elements and raceways is optimized to enhance the formation of a hydrodynamic lubricant film, maximizing the effects of the lubricant, while reducing heat generation and wear. Exceptional strength and durability have been achieved through the use of extremely clean, highly homogeneous steel, while a unique heat treatment process results in better dimensional stability in applications where operating temperatures are high. Today, SKF manufactures a large number of SKF Explorer bearings covering different bearing types.

The SKF Explorer sealed spherical roller bearings in both suction boxes ran trouble-free for more than 13 months. In addition to extended bearing service life, the company was able to eliminate the lubrication system and reduce grease consumption by approximately 3 kg/y per bearing. Eliminating the need to extract and dispose of grease from process water realized additional cost savings and environmental benefits.

SKF ENERGY EFFICIENT BEARINGS: FOR LIGHT TO NORMAL LOADS AND RELATIVELY HIGH SPEEDS
SKF Energy Efficient (E2) bearings belong to a performance class of bearings that have been specially designed to reduce the frictional moment in the bearing by at least 30 % when compared to SKF standard bearings (se bild s. 3, 5, 7 and 9).

Results have shown that, when applied to a shielded deep groove ball bearing, the new low-friction grease developed for the SKF E2 bearing will last at least two times longer than conventional greases used in similar standard bearings (se bild . 4).

SKF Energy Efficient tapered roller bearings offer a number of advantages. These bearings, like other SKF E2 bearings, are characterized by a power loss reduction of at least 30 %. These improvements were achieved by optimizing the number of rollers, replacing the steel cage with a new-design polymer cage and by optimizing the topography of the rollers, raceways and flange (se bild . 6). The result: a lighter-weight, cooler running bearing that consumes less lubricant and less power (se bild . 7).

At one of the GlaxoSmithKline Consumer Healthcare factories, with the installation of SKF E2 deep groove ball bearings in electrical motors for pumps, the return on investment included money savings as well as contributions to a better environment. The plant reports annual energy savings per motor of more than 4,500 kWh per year, equalling an annual savings of 390 euros. A two-tonne reduction in CO2 was realized, and the company estimates that it gained 20 euros for every euro invested.

Sustainability and savings
In conclusion, SKF Energy Efficient (E2) bearings have the potential to make a significant contribution to global sustainability. In fact, if SKF Energy Efficient deep groove ball bearings were used on every industrial motor in the EU and US (and assuming a minimum of 30 % lower frictional moment), potential energy savings would equal 2.46 billion kWh/year. And this estimate does not take into account the millions of motors and other applicable machines in use elsewhere throughout the world.