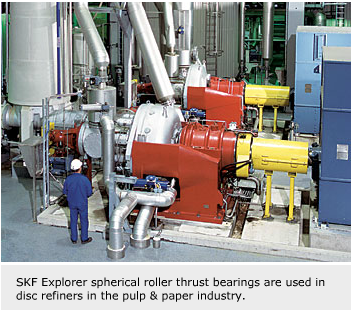 Another  bearing type has been added to the SKF Explorer class of high-performance products.

SKF Explorer class bearings
SKF Explorer is a new performance class of rolling element bearings that provides a substantial improvement in key operational parameters relevant to the bearing type and its typical applications. This new level of performance represents the blending of SKF’s application knowledge with its expertise in tribology, materials development, design optimisation,
manufacturing and not least a basically sound bearing design.

By studying the interrelationship between each bearing component, SKF engineers were able to maximise the effects of lubrication and minimise the effects of friction, wear and contamination. The research team looked at each component at the micro level and then developed new procedures to consistently manufacture to this new standard of excellence.
SKF Explorer spherical roller thrust bearings are characterised by a number of technical improvements, some of which are listed below.

All in all, the performance for spherical roller thrust bearings were improved dramatically, and service life was far beyond ISO standard life predictions. SKF engineers therefore adjusted calculation parameters.

Increased design effectiveness
Spherical roller thrust bearings were developed by SKF in the 1930s for use in the oil industry, and by the 1940s they were incorporated in heavy applications such as railway turntables and pivot systems for bridges and cranes. They were particularly popular in those applications because of their high load-carrying capability over such a relatively small bearing volume.

Today, spherical roller thrust bearings are used in many different applications such as extruders, injection moulding machinery, industrial gearboxes, water jets, thrusters, refiners, pumps, pivot bridges and cranes. One of the most illustrative examples of an SKF Explorer spherical roller thrust bearings is the azimuthing thruster, found in heavy-duty marine applications such as tug or harbour boats. They can also be found in the new pods – the revolutionary new propulsion system that combines an electric motor, shaft and propeller to propel and steer a ship. These are in service in cruise ships and even in large icebreakers (For more information, see Evolution issue 1/02 or visit evolution.skf.com).

To accommodate these loads, design engineers have a choice with SKF Explorer spherical roller thrust bearings that they did not have in the past: They can either “power up” or “size down” the application.

Now, compare the calculated life of that same application using the same size SKF Explorer bearings in all three positions; the life of bearings will reach almost 200,000 hours.

As demonstrated, there is a dramatic improvement in the capability of the bearing arrangement, which opens up new possibilities to the design engineer. The options are either to increase the service life of the bearing arrangement, as was demonstrated above, increase power output or downsize the application for a more compact, more cost-effective solution. Let’s see how SKF application engineers were able to “size down” the application.

New design option
Look at the following example. The thrusters have been redesigned with just two SKF Explorer spherical roller thrust bearings having the same size as in the previous example. The 23038 CC/W33 spherical roller bearing was eliminated because spherical roller thrust bearings can accommodate radial loads in addition to thrust loads. The new two-bearing arrangement will provide more than 45,000 hours of reliable service. That’s almost five years of continuous operation under normal operating conditions. This exceeds the 40,000 hours required by the classification societies.

In oil-bath applications such as the one described above, the rollers in a spherical roller thrust bearing create a pumping action to provide the rollers with a continuous supply of lubricant. In addition to lubricating the contact surfaces of the bearing, this pumping action is an effective way to introduce a constant supply of oil to dissipate heat. Both of these characteristics can have a substantial impact on the service life of the bearing.