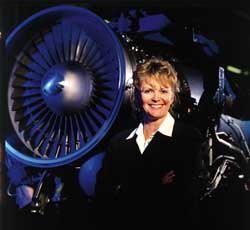 An eye on the big picture

“We have to establish partnerships, sharing our requirements rather than dictating solutions.”

An eye on the big picture

For Rolls-Royce executive Sue Lyons, the journey to the top of the engineering world has been propelled by determination, shrewd insight and a fierce love of the factory milieu.
“It was a sensory attack. Wonderful, noisy, a smell of oil and cotton. I was thrilled,” says Lyons, recalling the moment she fell in love with manufacturing. It happened one Saturday when she was just 4 years old, and her father took her to the cotton mill where he was a foreman. “My ambition was always to work in a factory,” she says.
Four decades later Lyons finds little time to visit the bustling factory floor, just a few hundred metres from her office in Bristol, England. “I do go as often as I can,” she says, but as deputy managing director and director of customer operations for Rolls-Royce Military Aero Engines (MAEL), her time is taken up with sales meetings, foreign travel and management responsibilities. The latter cover a staff of 2,500 and a turnover of £700 million (US$1.2 billion). Rolls-Royce’s annual sales total £4 billion (US$6.7 billion).
Lyons’ achievements are a testament to her determination. The daughter of a factory foreman and a part-time cleaner, she was brought up in the heart of England’s industrial north and learned early the no-nonsense values of hard work and straight thinking. In her secondary school of 1,200, she was one of four students who went on to study physics, maths and advanced maths for A levels, the qualifications needed for university entrance.
But what to study at university? “It had to be engineering,” she recalls. Lyons opted for production engineering. “This took in manpower, methods, materials and money – everything you needed to make anything at all.
It excited me. I wasn’t going to stovepipe myself in one discipline, and this allowed me to be something of a dilettante,” she says.
“Dilettante” is hardly the word to describe Lyons. What is clear, as she sits in her orderly office listing her jobs and achievements, is that her success is based on professional acumen. Being a woman in what is traditionally a man’s world appears to have little effect on her. “I have never felt tokenism or a glass ceiling,” she says. “People take you as they find you, how you behave and what you deliver.”
And deliver she has. After graduating from Nottingham University she applied for four jobs and was offered all four. The choice came down to Mars chocolates or Rolls-Royce engines. Although Mars offered a salary 50 percent higher than Rolls-Royce and the company seemed more progressive, she opted for nuts and bolts over nuts and cocoa. Her reasoning: “Mars offered me a line management position, and I wanted something broader – a professional engineering qualification. I also felt that the high salary might in the end become a trap.”
So began her career at Rolls-Royce, one of the most prestigious engineering names in the world. After training, she opted for a supervisory job, once again to broaden her experience. “I only had to supervise two men. They said, ‘We’ll resign if you get the job.’ I got it, and they didn’t,” she says, smiling.
From supervising two men, Lyons went on to become shift superintendent responsible for five workshops, 13 foremen and 400 employees making turbine blades. She faced shop-floor brawls, a bomb scare and the knowledge that she alone was “totally accountable” for the production of turbine blades for both civil and military engines – all at the age of 27.

Moving on
But Lyons’ most difficult decision came in 1986 when she was headhunted by a supplier to Rolls-Royce, Precision Castparts Corp. She was looking to increase her experience, so she took the job. “Rolls-Royce was still owned by the government at the time, and I always wondered what it would be like to work in the private sector,” she recalls.
While Lyons’ career continued its upward momentum at Precision Castparts, the same could not be said of the aerospace industry. Cyclical downturns forced restructuring, consolidations and layoffs. In a market then dominated by American giants Lockheed Martin Corp. and Pratt and Whitney, Rolls-Royce, the world’s No. 3 engine maker, had to run hard just to keep up. In 1987 the company was privatised. Competition continued to increase as the Cold War ended and governments everywhere cut military budgets. From 1989 to 1995, total military spending by NATO countries decreased by close to US$100 billion.
This was the environment that Lyons walked into when she returned to Rolls-Royce in 1989 to head up manufacturing engineering. One of her key responsibilities was to ensure quality control in the supplier network. To accomplish this, she launched Project 2001. Suppliers were encouraged to work with Rolls-Royce early on in their engineering development to ensure that they found the most cost-effective solutions. “We have to establish partnerships, sharing our requirements rather than dictating solutions. Many people thought it couldn’t be done, but because of the trust and confidence the partners have shown in each other, it is working,” says Lyons.
Today, as deputy managing director for all military engine operations, Lyons has a wide range of responsibilities from customer relations to operational support. Military budgets are still tight and, despite new opportunities opening up in the Far East and in eastern Europe, the company has to maintain the highest standards to stay competitive. Lyons relishes the challenge. “We have a very talented workforce and a high level of skills and competencies. It is our job to find new ways of fully utilising all this to provide more service to customers,” she says.
Developing partnerships, combining disciplines, seeing the big picture – all these are trademarks of Lyons’ approach. She is an enthusiastic proselytiser for multidisciplinary education and has helped pioneer a university-based project to develop a 50-kilowatt gas turbine engine. The project, which takes place at London’s Imperial College of Science, Technology and Medicine, where she is a visiting professor, combines both academic and industrial approaches.
Dr. Keith Pullen, a lecturer at Imperial College, is working with Lyons on the project. He says that in addition to her impressive technical ability, Lyons pushes the students to “address the wider issues of specifications, such as sales and the marketplace rather than just the design.”
With her continuing involvement with Nottingham University and a seat on the board of a Spanish aero engine maker Industria de Turbo Propulsores S.A., it is surprising Lyons has any free time at all. But she does manage to eke out a few hours to spend with her new horse, housed at a stable near her home. Clearly, however, the idea of making things is what excites her most. When the conversation returns to the factory floor, there is still that glint of wonder in her eyes that must have made her father proud when he took her to the cotton mill 40 years ago.

Deborah Wise,
a business journalist based in London