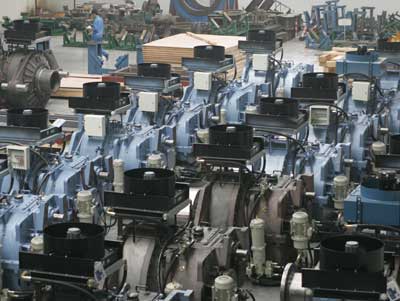 “We are now a big player in the domestic wind power gearbox market and have made great progress,” says Hu Yueming, the Group’s executive director and chairman of the board. “Our gearboxes are used in major wind power stations in the Xinjiang Uygur Autonomous Region, the Inner Mongolia Autonomous Region and other provinces.”

China is the second largest consumer of electricity in the world, and the Chinese government is attaching increasing importance to sustainable development. To that end, wind power has become a favoured substitute for non-renewable resources.

By the end of 2006, for example, according to statistics from China’s National Wind Power Engineering Technology Research Centre, the installed capacity of wind power in China had reached 2,600 MW, an increase of 105 percent over the previous year. In add-ition, a total of 3,311 wind-powered generators were scattered in 91 wind power stations in 16 provinces throughout the country.

That’s just the beginning.According to the medium- and long-term plan for renewable resources approved by the State Council in June 2007, by 2020 the installed capacity of wind power in China is expected to reach 30,000 MW.

The China High-Speed Transmission Equipment Group started its production of wind power gearboxes in 1997, and the business has swiftly developed into a major industry, helping the Group become a leader in this field in China.

Thanks to the high quality of its wind power gearboxes, in 2005 the company became a supplier to General Electrics (GE). “With the expansion of this cooperation, our supply to GE will grow steadily to include most of our products,” Hu says.

The Group was listed on the Hong Kong Stock Exchange in July 2007, drawing widespread attention from the finance sector. “We are the first listed company specializing in gearbox production in the country,” Hu says. “About 60 percent of the funds we raised will be put into research and development and the expansion of our wind power gearbox production.”

Hu attributes the Group’s high cost-effectiveness to several factors: “Compared with other countries, China is competitive in areas such as labour costs, land and logistics,” explains Hu. “We use high-efficient machinery and have adopted an advanced management system to improve productivity.”

Research and development has also been a strong factor and has resulted in the Group achieving “the five maxima” record in China: the highest gear rolling speed, the highest linear speed, the highest manufacturing precision, the maximum drive power and the largest output torque.

“Investment in research and development accounts for 5 percent of our annual output value,” Hu says. “We now boast more than 30 invention or utility model
patents, and the wind power gearbox has won great support from the Ministry of Science and Technology.”

However, competition from home and abroad is a reality the Group recognizes.

“Research and development is our top priority,” says Hu. “We will take measures to reinforce our market share and realize product optimization to cope with changing market requirements.”

In addition, to meet increased productivity demands, the Group is building a new factory that will go into operation in 2009. “Accordingly, in 2010, we expect our output value to reach 6 billion renminbi (about 560 million euros),” says Hu.

SKF has worked with the China High-Speed Transmission Equipment Group Co. Ltd. for more than 10 years. “It is our biggest customer in China,” says Derek Zhang, sales supervisor at SKF China’s Nanjing Office. “We are also the largest bearing supplier to the company.”

“The Group is one of the first clients in the world to adopt the new bearing and definitely the first in China,” says Zhang.

SKF also provides the Group with other products, including couplings, pumps and heaters.