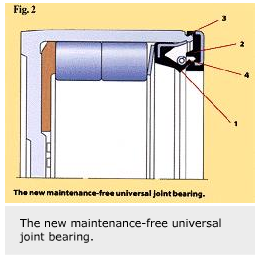 The universal joint
for commercial vehicle propeller shafts is essentially a specially-designed grease-lubricated needle roller bearing. This
new maintenance-free
universal joint bearing
is now in production.The present design of a drawn cup bearing incorporates a kind of plain bearing at the closed end and integral seals at the open end (fig. 1).

Both the truck operator and the environment will benefit from this product innovation.

The propeller shafts used today must be relubricated at regular intervals if they are to attain acceptable service life. The greater part of the used and surplus grease is ejected from the propeller shaft and ends up in the environment. In Germany, it is estimated that several hundred tonnes of grease pollution come from this source alone.

This grease loss was the starting point for the innovative development work. Before a new concept could evolve however, extensive system analysis of existing relubricable universal joints was carried out. This study was based on years of field experience and data from in-house dynamic relationships between the universal joint (cardan cross) bearings, seal design and grease movement. The SKF universal joint bearings produced so far have achieved satisfactory service life in terms of fatigue. The fatigue life of a universal joint bearing is determined by the macro-geometrical dimensions, component micro-geometry and the materials used.

Based on this promising field experience, the development work was concentrated on two main tasks:

The operating conditions for universal joint bearings on commercial vehicle propeller shafts have always been associated with heavy specific loads in the rolling contact. Because of the kinematic conditions, the roller set of a universal joint bearing ‘only’ performs oscillating movements. Both these factors place extremely high demands on the grease.

The concept of a maintenance-free propeller shaft has brought the use of a high-performance grease even more into focus since, if there was no relubrication whatsoever, fresh grease could not be supplied to the system at any time.

Considerable importance in this connection was attached to grease properties such as:

Another design feature of the maintenance-free universal joint is that considerable attention was paid to the design and performance of the sealing system (primary and secondary seals). Figure 2 shows the patented SKF sealing concept.

The spring-loaded primary sealing lip (1) enables sealing performance (against grease loss) to be kept constant throughout service life. The special design of the lip ensures that an adequate lubricant ‘wedge’ can be built up under the lip to prevent wear.

The secondary seal (2), which has a sheet steel reinforcement, serves to exclude dirt. It has an interference fit on the pin where it prevents penetration of water and all other forms of contamination. The steel insert enables this tight fit to be maintained and provides protection even against loose stones. The sealing lip edge (3) contacts the outside surface of the drawn cup and acts as a dynamic seal at this position.

The internal secondary axial sealing lip (4) which runs against the secondary seal presents a further barrier to any dirt which may have penetrated. The efficiency of this lip’s function is supported by rotation of the propeller shaft. All sealing positions and the intervening spaces are filled with lubricating grease. This further enhances sealing efficiency.

The maintenance-free universal joint differs from current models in another aspect. The cross itself is without the internal lubrication ducts and there is no grease nipple. Instead, the end faces of the cross have relatively shallow depressions which are intended as grease reservoirs. The absence of the through-going inter-connected lubrication ducts means that production costs are reduced.

Performance testing of the SKF maintenance-free universal joint bearings, which involved extensive rig tests at SKF and potential customers, has been successfully completed. Endurance testing of the joints are underway, but due to the long time scale required, they have not yet been completed.