» Towards standardization in upgrading industrial fans 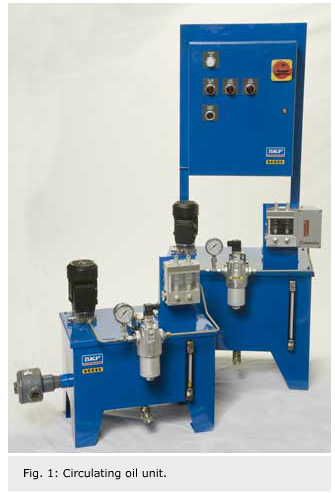 Towards standardization in upgrading industrial fans

Industrial fans and blowersare a critical part of many industrial processes. Thus, it is essential that they meet the demands of higher performance and lower total cost of operation. Bearings and related components are important factors in improving fan productivity. By combining knowledge from key areas – bearings and housings, lubrication, seals and service – SKF is now providing a standardized solution for upgrading fans.

Bearing failures in industrial fans are costly, since this equipment is often critical to the production process. A breakdown might cause a total stop in production, which can result in losses of thousands of euros. Therefore the extension of bearing service life in industrial fans and blowers is a high-priority issue.

Previously, every fan upgrade was customized for each individual application. Now, however, SKF engineers have come up with a complete solution for upgrading industrial fans, making it possible to standardize the procedure. The upgrade is specially designed to reduce operating temperatures and includes optimized bearings and housings and a new circulating oil lubrication system. The effects of the lower operating temperatures are increased reliability, lower maintenance costs and extended service life.

Demanding conditions
Productivity demands in industry often require that fans and blowers perform at their limit. Higher rotational speeds mean higher operating temperatures. In addition, many fans are used to evacuate hot gases, with temperatures ranging from 100 °C to 600 °C. Some of this heat is transferred to the bearings via radiation and conduction in the fan shaft. Operating under high temperatures can lead to bearing failure, which in turn causes unplanned stops, unnecessary downtime and production losses.

High operating temperatures also have a negative impact on bearing lubrication, as they shorten the service life of the base oil. Degradation of the lubrication means increased friction in the bearings, inad-equate lubrication and possible bearing failure, which in turn leads to an increased risk of unplanned stops. More than one-third of all premature bearing failures are caused by lubrication problems.

Temperature-reducing components
A complete solution for reducing bearing temperature in industrial fan applications has been developed through SKF’s combined knowledge of bearings and housings, lubrication, seals and service.

A fan upgrade starts with an assessment – a functional analysis of the equipment in which current problems are evaluated – and suggests how the upgrade should be carried out. SKF can take care of the whole process, from assessment to installation of new equipment, taking full responsibility for the functionality, should this be required by the customer.

The SKF fan upgrade comprises a number of components, each with its own contribution to lowering bearing operating temperatures. A new, circulating oil lubrication system reduces operating temperatures and the need for maintenance, the SKF self-aligning bearing system generates lower friction and specially designed housings are optimized for use with circulating oil lubrication. A condition monitoring system is also part of the total offering, providing early warning of potential bearing failure. The full value of the solution is achieved when the complete fan upgrade, including all compon-ents, is installed.

A large tank provides enough time for the oil to rest and de-air. During operation it also has the advantage of enabling the oil to cool before it is used again. The tank also contains a heater that warms up the oil at start up, in order to maintain the appropriate viscosity at all times. A high-capacity filter cartridge removes polluting particles from the oil. The oil lubrication unit also includes pressure sensors that give a warning when the pressure is too high and the filters need to be changed. If the pressure exceeds a certain level, a bypass option will open automatic-ally. A manual bypass valve enables for change of filters during operation.

A common problem in oil lubrication units is excessive oil circulating back to the tank. Typically, systems use an overflow valve to handle this problem, but this leads to energy losses, increased oil temperature, component wear and oil degradation. In the SKF system, the solution is to minimize the amount of excessive oil circulating back to the tank, by optimizing the amount of oil in the system. Thus, energy and oil are saved, resulting in reduced environmental effects. Some variants are available for each standardized oil lubrication unit; for example a cooler and a control unit for alarm functions and monitoring are optional, and a standby pump could be used in critical applications. As the oil is handled in a well-controlled, closed system, lubricant leakage is minim-ized and the effects on the environment are reduced. For even larger fans, SKF has the Flowline solution (see Evolution #4–2007), a complete oil circulation system family, designed to fulfil various requirements.

Oil viscosity
The basic function of lubrication is to create a very thin but adequate oil film between the rolling elements, raceways and cage(s) so that metal-to-metal contact is prevented at all times. It is important that this oil film has the right thickness. The thickness is determined by the bearing operating temperature and the viscosity of the selected oil. Oil viscosity varies with temperature; a higher temperature means a lower operating viscosity. Therefore the most important parameter when choosing a lubricant is the viscosity it has at the bearing operating temperature.

An oil type and viscosity is recommended having a k value between 1 and 4 at bearing operating temperature. This normally results in an oil viscosity ranging from 68 to 220 mm2/s (ISO VG 68 to 220) at a reference temperature of 40 °C. If the k value is below 1, the surfaces are not fully separated, and there is a risk of metal-to-metal contact. A k value of more than 5 will increase the friction in the bearing and, consequently, the operating temperature.

The SKF self-aligning bearing system (fig.4) overcomes this problem. It incorp-orates a self-aligning bearing in the locating position and a CARB toroidal roller bearing in the non-locating position. The CARB bearing is a self-aligning radial bearing with an inner ring that moves independently of the outer ring – similar to a cylindrical roller bearing. The total bearing system accommodates misalignment and shaft deflection, while the CARB bearing accommodates shaft elongation within the bearing, virtually without friction and without inducing internal axial loads.

Since there are no induced internal axial loads, the solution works with lower friction, keeping operating temperatures down. The SKF self-aligning bearing system also operates with reduced vibration and noise levels and enables safer, more optimized designs. This, in turn, leads to extended relubrication intervals and extended bearing service life.

In an SKF self-aligning bearing system that consists of a spherical roller bearing and a CARB bearing, both bearings belong to the SKF Explorer performance class. SKF Explorer bearings provide a substantial improvement in key operational param-eters, which adds to bearing service life.

The SONL housing has a deep reservoir that holds a large volume of oil, providing an efficient way to remove thermal energy. The SONL housing is suitable for both oil bath and circulating oil lubrication and has a well-proven, specially designed oil seal to avoid leakage.

SNL plummer block housings, modified for oil lubrication, are another good alternative, with their high-performance oil seals and heat-transfer capabilities.

Using one of these SKF bearing housings together with the SKF selfaligning bearing system dramatically reduces bearing operating temperatures.

Conclusion
Bearings in fans situated in high-temperature environments often operate at their limits. Thanks to specialist knowledge within a number of key areas, SKF can deliver a complete solution for upgrading industrial fans. The results – increased reliability, extended bearing service life, extended lubricant life and reduced maintenance – are obviously beneficial from a business perspective, but they are also important for sustainability.