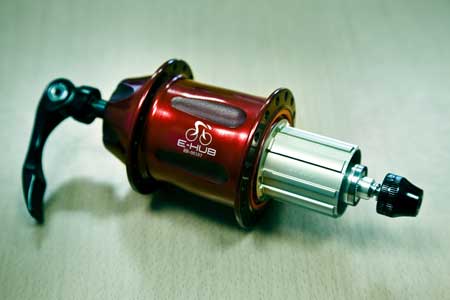 The two friends spent the next three years trying to find an answer that was commercially acceptable. “For the first eight months, we concentrated on studying the mechanism – how to overcome the dead point mechanically,” recalls Gorjan. The solution they devised is based on a suspension system inside the driving wheel hub, which separates the rotation of the central part of the hub on an axis from the rotation of the external part fixed by spokes to the rim. This design enables a cyclist to push with more power during the working segments of a pedaling cycle, while a portion of the energy is stored into the spring mechanism of the hub. The stored energy is then released during the idle segments (the dead points), helping the cyclist to overcome them faster and with less effort. The spring also softens the transitions between segments, which lowers stress on the legs.

The two mennamed their creation E-hub, for energy hub, and the company Ekstundo, meaning idea or innov-ation. Mahnič became the company’s general manager, and Gorjan took the title of R&D director. The design they eventually patented consists of 22 aluminum and steel components (including four SKF bearings), all but one manufactured in the European Union.

The first prototype was too heavy for racing bikes, so the innovators focused on reducing the weight to what it is today: 23 ounces. In January 2008 they received approval from the Union Cycliste Internationale (UCI) to sell their creation to professional racers. This was an important milestone because they couldn’t approach professional cyclists without it. “We had started marketing our hub to amateurs while we were waiting for approval from the UCI,” Gorjan notes. Meanwhile, they obtained patent protection for their hub in 146 countries.

In December 2008,an article about Ekstundo ran in a Slovenian sports magazine, accompanied by a picture that showed bearings with the SKF logo. SKF Slovenia saw the article and contacted the company, opening new opportunities for cooperation. Today, Ekstundo is testing a new generation of SKF bearings – with excellent results to date. It is likely that the E-hubs will eventually be equipped with SKF hybrid bearings because the ceramic balls in these bearings are lighter and more resistant and generate less friction. Ekstundo is also working on a hub housing made of a carbon composite to reduce weight in comparison with today’s aluminum version.

The company expects to sell 4,000 hubs in 2009, with a goal of reaching 25 percent of the 100,000 bicycles sold annually for professional use. But since E-hub is suitable for recreational cyclists as well, Mahnič and Gorjan are looking to a bigger number: a billion bicycles a year worldwide.

• Hybrid bearings, which have ceramic balls made of bearing grade silicon nitride instead of steel. These bearings have a higher speed capability and provide longer service life than all-steel ball bearings. Compared with steel balls, the density of ceramic balls is only 40 percent, so they weigh less and have lower inertia, resulting in less cage stresses and lower friction in high-speed conditions, cooler running and longer grease life. They also perform better under limited lubrication conditions.