» A matter of size 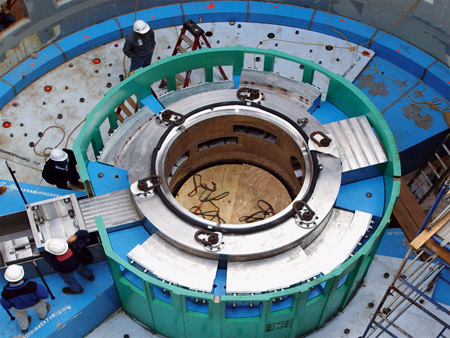 A matter of size

Nestled in therolling hills of eastern Tennessee, among small towns and wide rivers, lies one of the most famous research labs in history. Oak Ridge National Laboratory, a secret atomic weapons facility in World War II, sits quietly, yet hugely, in the countryside. Soon, the laboratory will take on new fame as home of the world’s most powerful neutron source, a public research facility where cutting-edge discoveries are certain to occur with unsurpassed frequency. This new lab, the Spallation Neutron Source (SNS), is a collaborative effort of six Department of Energy institutions, including Argonne, Brookhaven, Jefferson, Lawrence Berkeley, Los Alamos and Oak Ridge national labs, each of which will conduct research at the facility.

“We plan to have up to 2,000 external users in here each year,” says Oak Ridge instrument scientist John Ankner. “University users, people from other national labs, will be able to submit a proposal, and it will be peer-reviewed for scientific merit. Time will be awarded to use 24 scientific instruments; these will be used as public resources.”
The study of neutrons helps scientists learn more about atoms and matter, which has lead to improvements in materials from plastics to windshields, aircraft and bullet proof vests as well as medical breakthroughs with the creation of radioisotopes. Neutrons have been produced using reactors since the 1940s, but producing neutrons with accelerators, called spallation, is the wave of the future.

“Since about 1960 there really has not been any advance in reactor neutron source technology,” says Ankner. “Reactors get so hot, they’re limited by the heat as to how many neutrons they can produce. Spallation is 10 to 15 times more efficient. The next generation is going to produce a factor of 10 to 100 times higher flux of useful neutrons.

“We’re hoping that, when you have this kind of power, you can see more things faster and that you’ll find new things you didn’t know you could do – things that were inconceivable before,” he says.

The sleek new SNS facility rises on a hilltop called Chestnut Ridge. The glass, steel and concrete five-story office building curves around the end of the target building, slated for completion in April 2006. Scientists and administrators moved into the Central Laboratory and Office building (CLO) a year ago.

“It’s certainly the most beautiful place I’ve worked,” says Ankner, who came to Oak Ridge from Argonne National Lab in Chicago two years ago. “It’s really a privilege. The building itself is delightful architecturally.”

A bridge runs from the CLO to the target building, where neutrons will be freed by protons and collected for a variety of research projects. A 500-meter (1,640-foot) linear accelerator (LINAC) runs from a building off to the left, past four small cooling towers. Electricity consumption will be so great here – propelling protons from the front-end building through the LINAC at nearly the speed of light – that the place needs its own power station. The sprinting protons flow into an accumulator ring and are then thrust onto the target of liquid mercury, scattering neutrons into 18 beam lines, emanating from the target like rays from the sun.

The beam lines are of different lengths, each designed to provide carefully tailored neutron beams to create unique opportunities for study. The beam lines are fitted with optimized disk, fermi and t-zero choppers, mechanical devices that allow selected neutrons to arrive at their final destination, the detector, where scientists will collect neutrons scattered from their samples.

A key elementthat makes the SNS facility more reliable and more productive than others like it is the use of SKF chopper solutions built and levitated by magnetic bearings. The SKF choppers will essentially be maintenance-free, eliminating the time-consuming, potentially dangerous servicing required every two years on similar facilities in operation today.

“On other choppers that are non-magnetic and have standard bearings, I will have to take them out every two years to do maintenance,” says Bill McHargue, chopper head of the SNS Experimental Facilities Division.

The beam lines must be buried in thick, protective shielding of concrete, steel and other impervious materials. Shielding takes a lot of space, making access difficult because of crowded beam lines. At SNS, a 30-ton crane is used to lift segments of shielding to provide access to the choppers in the beam lines. The equipment must spend 10 days to two weeks deactivating while the radiation decays before staff can work on the choppers. Reliability is therefore of greatest importance.

“Yes, it’s a superior technology, and the fact that magnetic bearings do not wear really extends service life,” says Ankner. “That’s the attraction. Service operations will have to be careful so that no one gets exposed to radiation. If you don’t lift up the lid, nobody can get a radiation dose.”

The choppers are customized to meet the specifications of the scientists, depending on the applications they have in mind. The sizes of the slits and windows through which the neutrons pass can be modified in each chopper, and each can be coated with various materials to control absorption and filtration of neutrons. Most beam lines have two to four choppers for the neutrons to pass through, and they’re synchronized to pass the selected neutrons down the beam line.

Beam line six, a small-angle neutron scanner, will study atomic and molecular aggregates such as polymers, magnetic domains and all sorts of nanoscale structures. “Biological aggregates such as DNA-protein complexes, muscle fibers and proteins embedded in cell membranes are particularly important areas of study,” says Ankner. “Measuring the structures of these objects under different chemical conditions and temperatures help us in understanding bacterial and viral function, metabolic processes and the activity of pharmaceutical compounds.”

The backscattering spectrometer on beam line two will measure the excitation of matter. “Part of the way things function is how they’re put together, but equally important is how they respond internally,” Ankner says. “We will be able to look inside of materials and observe the atomic motions associated with chemistry and catalysis to see how things function in both natural and artificially produced materials – gases, toxins, plastics, anything.”

Ankner says thatstudying neutrons can be particularly useful in magnetic materials and compounds that contain hydrogen. These have technological applications such as computers, the development of vaccines and medicines, and the design of new plastics.

“After 40 years of never having enough neutrons, now we have this tremendous opportunity to couple optimized instruments with a great increase in usable source flux,” Ankner says. “We’ll have more neutrons than we’ve ever had, so we can learn what might be out there that we haven’t been able to see before.

“We are a knowledge-generating facility.”

SKF choppers have very accurate phase control so that users can know exactly where the payloads or disks are in the rotation. The speed and rotation of the shaft can be monitored and adjusted as needed. Another beneficial aspect of the SKF choppers is their very compact controller. The 3.5 inch-high, 20-inch-long MB350 PC/R controller includes magnetic levitation control and power electronics as well as the motor drive. The control system for the chopper and motor is simple, with user-friendly, real-time communication for the operator. SNS may use as many as 50 to 60 SKF choppers when the beam lines are completed. “SKF provides a very attractive option,” says Bill McHargue, chopper head of the SNS Experimental Facilities Division. Three of the SKF choppers will be used in SNAP, a high-pressure diffractometer that will be used to study geological problems, simulating high pressures such as those at the center of the earth to predict the behavior of minerals under pressure. This knowledge may help explain such phenomena as earthquake severity and timing.