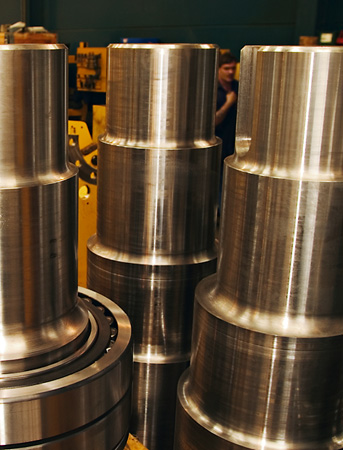 In an era whenemployee turnover is on the rise, Extec Screens and Crushers Ltd. manages to hold onto its staff for the long term. Today, in fact, there are many on the staff roster who recall the early years of the company, in the late 1980s and early 1990s, when the industry was inventing and re-inventing itself to meet economic and environmental global changes and delivering exciting new products on a dauntingly regular basis.

Extec (the name derives from the slogan “excellence through technology”) designs and manufactures large machines that reduce rock and other rubble to aggregate, gravel and even fine sand. These machines are also used to crush and grade coal, sort everything from timber to household waste and grade road “scalpings,” allowing bitumen taken from existing highways to be incorporated on-site into the materials for highway repair.

“When I first joined Extec,” recalls Roger Murrow, communications chief for the company, “we produced a handful of screens and crushers a year. Last year, we made in excess of 1,000, yet we still didn’t meet customer demand.”

When Murrow joined the company, Extec’s machines were already revolutionizing a basic design that, as he says, “was unchanged since King Solomon’s mines.”

Even today, in some parts of the world rock is reduced to gravel and sand using hand-turned “jaw crushers.” Since its founding in 1987, Extec has produced sophisticated machinery that takes the place of sledgehammers and hand-turned crushers. In doing so, not only has it become a world leader in a fast-emerging field, but it has also helped turn at least one industry on its head.

Twenty years ago, Extec realized that companies involved in the production of gravel, sand and fine-grade coal were having to pay for the haulage of rock and coal from quarries or mines to fixed crushing and screening plants that cost millions to purchase and maintain. A market for smaller, mobile screens and crushers that could go to the source was identified. Extec set about inventing and manufacturing machines that could easily be hauled to the mine or quarry and that, even on site, could maneuver under their own power from one workplace to another. It was the beginning of something big. Demand for the mobile plant was immediate, and sales growth remains fierce, thanks in the main to increasing awareness of the need for environmental sustainability and the concomitant, explosive growth in recycling.

Take, for example,the demolition industry. Until very recently, a company faced with the need to raze, say, a huge power station, would put the job out to tender. Demolition companies then submitted tenders to do the job for a fat fee. Not so today. Now, the demolition contractors submit tenders, not for how much they will charge the power plant owners, but how much they will pay the plant owners to knock it down – in return for ownership of the rubble. Such is the value of the aggregate, gravel and sand that can be produced from the rubble of a major demolition site, that what were once “simple” demolition contractors are now major manufacturers of construction materials.

Another forceful incentive is the growing incidence of landfill taxes – fees incurred for every ton of waste dumped at landfill sites. Already common in the developed world, such fees will appear in less developed economies sooner than later, meaning an ever-growing marketplace for mobile screens and crushers to turn rubble into profitable building materials instead of expensive landfill.

Crushers take raw material and reduce it to rubble of a manageable size. This becomes the input material for screens, which filter and separate variously sized fragments and output them onto separate beltways for separation into individual piles. Machines working together can handle more than 300 tons per hour of input material, producing up to five grades of output, from fine sand particles to stone aggregate of up to 2 inches in diameter. The machines can be linked using programmable logic control, so that any blockage or delay experienced by one machine causes the others to automatically shut off until the problem is taken care of, at which time production will start up again.

Extec is what Operations Director Ian English calls “the industry leader in terms of innovation,” by dint of one thing alone: near-endless effort and expenditure in research and development.

“There is no resting on our laurels,” he says. “We have more than 100 worldwide patents and more than 30 ongoing research and development projects.” This, he explains, is a function of the rising demand for an ever-evolving product line that has seen Extec’s turnover leap from 97 million euros [$126 million] to more than 160 million euros [$208 million] in only four years. Not even sharply rising steel and oil prices have dented the market’s enthusiasm. For the first production year of their new E7 screening machine, English and his colleagues foresaw a demand for 35 units. They built and sold well over 200 machines – more than 500 percent above predicted demand.

Today, Extec mobilemachinery is in operation in almost every country in the world, from French coal mines to downtown Tokyo demolition sites to the bowl of an extinct volcano in the Canary Islands. Manufacturing takes place at its 18.5-acre factory in Derbyshire, England, which employs more than 500 staff. It has design and pre-assembly teams in Sheffield, England, and in Omagh, Northern Ireland, as well as sales and after-sales units in the United States, Australia and
Germany, which together employ an additional 180 staff. Components are sourced from supplier partners in India, China and Thailand.

Another reason for Extec’s success is the speed with which the company can bring new products online.

“We can bring a completely new machine to market faster than anyone else,” says English, quoting the example of the X44-SBS tracked cone crusher that uses the biggest bearing supplied to Extec by SKF, a large slewing ring for the cone unit that has a bore of about 3 feet.

“We only secured a deal to buy cone units from Tel-smith, in the USA, in December 2005,” he says. “And by spring/summer 2006, our new X44-SBS cone crushing machines were in operation on three continents.”

The company is always on the lookout for ways to develop its machines. According to English, much of the inspiration for new features and new machines comes from the marketplace.

“Customers help develop our machines,” he says. “The quicker we can implement a customer’s request for new features or specifications, the better it is for both the customer and for Extec. What is a new request from a customer today often becomes a standard feature a few months down the line.”

Cooperation on all fronts

SKF UK has been cooperating with Extec Screens and Crushers Ltd. since Extec was formed. Three years ago, SKF became the sole supplier to Extec of bearings and other items, including Vogel lubrication systems and Copperhead electronic fault-detection systems.

One other requirement borne of Extec’s worldwide sales network is operational sustainability in wildly disparate climates, from the baking heat of the African desert to the chill of Siberia.

Another collaborative area is the implementation of “green” design features. SKF supplies conveyor bearings suited for long-term operation without external lubrication, lowering both Extec’s production costs and its clients’ outlays on maintenance.