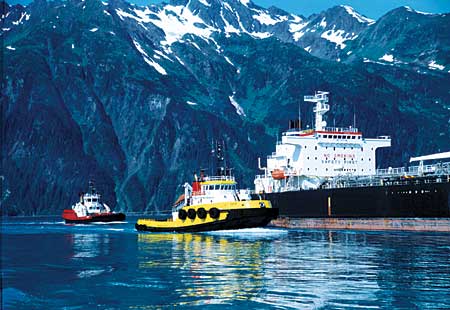 Up in Alaska’s oil-tanker lanes, powerful tugboats watch over their big brothers.

Nature likes to make us jump through hoops to enjoy her bounty. A good example is the complex and challenging job of bringing crude oil from the Arctic oilfields of Alaska to the contiguous “lower 48” – the states that lie below Canada.

First, the crude oil flows through the 800-mile Trans-Alaska Pipeline to a marine terminal at Port Valdez, in southern Alaska. There, tankers some 980 feet in length load the crude. Then, heavy with their load and riding low in the water, they lumber southward, bound for ports on the West Coast.

But to get where they’re going, the ships have to run something of an obstacle course. When exiting the harbor at Port Valdez, they must pass through the Valdez Narrows, which squeezes down to a width of about 1,600 feet – an uncomfortably narrow space for tankers that potentially could be set adrift by mechanical problems. Then they must pass through Prince William Sound, a magnificent region with more than 15,000 square miles of fjords and inlets. Farther along the route, the ships must clear sunken Middle Rock. In Columbia Bay, they might have to dodge icebergs shed by the massive Columbia Glacier. Anywhere along the route, they must steer clear of errant fishing boats and nets.

Then there’s the danger of suffering a power or steering failure, drifting into shallow water, tearing the hull and leaking thousands or millions of barrels of crude oil into the water – a flashback to the grounding of the tanker Exxon Valdez in 1989.

“All in all, the dangers out here today are minimal,” observes Captain Lawrence Hill, who commands the escort tugboat Attentive. “Sure, we have a few challenges. But things are fairly uneventful here, and that’s the way we want to keep it.”

Helping to keep tanker operations “uneventful” is a new generation of tankers and tugs.

Hulls within hulls
Take a shoebox and put partitions in it – two that run from end to end, five that cross from side to side. That’s a model of the interior of a modern tanker. If tankers were empty shells, the oil they carried would slosh around and make the ships tipsy, difficult to navigate. The partitions reduce the sloshing and stabilize the load.

Newer double-hull tankers – each with a hull within a hull and a void between – cut the risks of spilling crude in the event of a collision or grounding. Such accidents might rupture an exterior hull, but the interior hull would keep the ship afloat and the cargo safely contained.

Because a violent roll can damage equipment and injure crewmembers, a tanker must be engineered so it doesn’t roll too far when it’s under way. That’s especially crucial for tankers serving in Alaska; during winter, they battle some of the world’s roughest seas.

These ships must be sturdy and sound, yet their hulls must be flexible. Design a ship that’s too rigid – that won’t absorb the twists and turns imparted by angry waves – and the hull could snap. Even at rest, double-hull tankers sag as much as a foot and a half in the middle.

Twenty-first century tugboats are sophisticated crafts, too – and larger and more muscular than many landlubbers might imagine.

Crowley operates a fleet of tugs and oil-spill response barges and vessels. The fleet includes five of the most powerful and technologically advanced tugboats in the world.

The three Prevention and Response Tugs – Alert, Attentive and Aware – are about 130 feet long and propelled by omni-directional blades that move the tugs in any direction, even sideways. All are powered by 10,000-horsepower engines and tote about 650 yards of floating boom, which, if needed, could be used to corral oil spilled on the ocean surface. The boats are also equipped with “skimmers” – pumps that could be used to capture the trapped oil. Each boat is painted bright yellow so it can be spotted easily.

Also in Crowley’s Alaska armada are the bright-red Enhanced Tractor Tugs (ETTs), Nanuq and Tanerliq. Each is 150 feet in length and equipped with 10,000-horsepower engines and omni-directional steering.

“Each craft,” notes Leonard, “runs around the clock. And each is operated by a crew of half a dozen people, all licensed by the Coast Guard.”

Safe sailing
It’s safe to say that each Crowley crewmember breathes a tiny sigh of relief and satisfaction when, at the end of each “outbound” escort, he watches the loaded tanker head safely into the open sea. No one regrets the routine of an uneventful escort.

“Two summers ago,” Leonard recalls, “a tanker was in danger of running into a fisherman’s net with a fishing boat on one end and a skiff on the other. If the ship had gone through the net, the boat and skiff would have slammed against the tanker’s sides. The tug crews prevented that by acting quickly and using the tugs to bring the tanker to a halt.

“If that’s the most serious incident we ever have to respond to,” says Leonard, “we’ll all be happy.”

Crude economics
Alaskan crude oil is one of a kind. Actually, all crude oils vary from oilfield to oilfield – a fact that complicates life for companies that produce oil and refine it into gasoline, heating oil and other petroleum products.

For starters, crude comes in many varieties, from lighter, thinner grades to thick, heavy residuals – the “bottom of the barrel.”

“Complicating things is sulphur, a crude-oil contaminant,” explains Michael Lobue, refining issues manager for the American Petroleum Institute.  “It must be kept out of gasoline so it won’t corrode engines, and scrubbed from refinery stacks so it won’t foul the air.”

Refiners like crudes that are light (thinner) and sweet (low in sulphur). Such crudes are easier and cheaper to refine. But they cost more, and they are becoming harder to find.

All this leaves refiners with a trade-off: Pay more for sweet crude that can be refined economically, or pay less for sour crude and invest in the heavy-duty equipment needed to refine it.