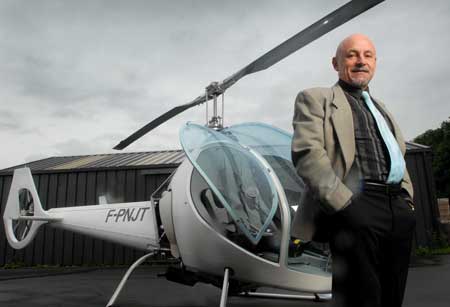 Daniel Michau, chief pilot of Dynali, met designer and company founder Jacques Tonet some five years ago. “When I arrived, Jacques was working on a prototype machine that has been radically improved since,” Michau explains. “Now we have certification for our two-seater H2S leisure helicopters and more orders than we can fulfill.”

The H2S is available in kit form in Europe for around $120,000. It’s sold as a kit because in Europe an owner can carry out maintenance on a self-build craft, but a conventional machine must be serviced in a certified workshop, which can be very expensive. The kit comes with a complete stainless-steel chassis and the engine in place. The cabin and tail boom are made from Kevlar and carbon fiber. “The stainless steel is not just strong and flexible, but also acts as a shock absorber,” says Michau. “It’s a wonderful material for helicopters, and yet we’re the only manufacturer to use it.”

Once built, the H2Shas a cruising speed of 100 miles per hour and consumes less than 7 gallons of fuel per hour. It has an optional spare tank. The useful load (the weight of the crew, passenger, fuel and cargo) is 540 pounds, and the flight range is three hours at maximum charge (excluding spare tank). The machine is equipped with an 165 hp engine. Dynali is also working on adding a compressor to the engine, taking the horsepower up to 220 hp, but for now, there is just one model in the range.

An air ambulance version of the H2S is currently in development for the African and Asian markets. This medical helicopter can carry one wounded person plus the pilot. There is no room for a caregiver. Although smaller than its competitors, the Dynali solution is a fraction of the cost. “Our main competitor’s medical helicopter sells for 3.5 million euros [$4.5 million] and costs 2,000 euros [$2,500] per hour to fly. Ours will sell ready-to-fly at just 100,000 euros [about $125,000] and will cost around 100 euros [about $125] per hour to fly,” explains Michau. “It might be less comfortable, but I know I’d prefer to be rushed to hospital in 30 minutes in a Dynali than six hours in a four-wheel drive!” Dynali is also working on a more versatile four-seat model that can be used for medical and civil applications.

However, other “clients” are less welcome. One night in November 2007, Michau was abducted at gunpoint from his home by a Kalashnikov-bearing man dressed as a policeman who drove him to the Dynali workshop. Michau explains: “The whole team had been working overtime and was trussed up on the floor. Two men forced me into a chopper at gunpoint. The Dynali isn’t built for night flying – there are no lights on it and no lights on the dash – but they had a torch, so up we went and flew for about 20 miles to a nearby prison.

The only trouble now with the Dynali helicopters is that the company can’t build them fast enough. The first order was signed in 2004, and the company is now building its seventh machine. “It’s been a steep learning curve because the technology is so complicated and precise that it’s extremely hard to ensure that everything works just right,” says Michau. “You can’t rush aeronautics; you have to go slow and follow the speed of your materials,” he adds. But work will soon be completed on a new 14,000-square-foot production facility next door to the existing factory, where Dynali will be able to produce 10 machines a month, compared with the current figure of two or three.