» David Coulthard – A passion for winning 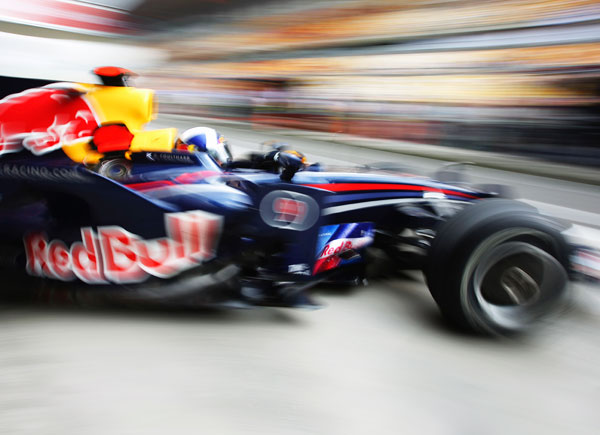 David Coulthard – A passion for winning

Following more than a dozen years in the glare of Formula 1, David Coulthard is still ­committed to two things – winning and improving.

Lives: In Monaco since 1995
Family: A fiancée, a son and a stepdaughter
Age: 40
Favorite film or book: “I have yet to see it or read it…”

David Coulthard is one of the most successful Formula 1 drivers in history. Nevertheless, he arrives at an interview with Evolution not in a car but on his mountain bike. It’s a concession to the heavy traffic in his Monaco home, but it’s also a part of his ongoing fitness regime. And at 40, he is certainly fit – slim and springy, with a firm handshake.

Four wheels have been involved in Coulthard’s life from the very beginning. On the night in March 1971 when Coulthard was born, his parents sped off to the maternity hospital where his mother was put on a trolley, ready to be moved into the delivery room. But Coulthard didn’t wait. “I was actually born on the trolley, only 45 minutes after they had left the house,” says Coulthard. “I was literally born on four wheels.”

David’s family was well connected to motor racing. Coulthard’s grandfather competed in the Monte Carlo rally, and his father, Duncan
Coulthard, was a successful kart driver, at one point Scotland’s karting champion. Duncan stopped his racing career in his teens when his father died, and when he turned 21 he took over the family business, the Hayton Coulthard transportation company, located in Twynholm, Scotland.

However, Duncan stayed involved in karting, running the Coulthard Racing team, and when David Coulthard turned 11, he received a kart from his father as a birthday present. In his first race, David was lapped a couple of times, but he soon scored his first win and took the best novice trophy at the local Cults track in Stranraer, Scotland.

For David Coulthard, it was not the racing itself that was the draw; it was something else.

“I never had a passion for cars,” he says. “My passion was for competing and winning. I tried some other sports before karting, but I understood that this was my opportunity to follow that passion.”

During his karting career, Coulthard used to grade each race on a 10-point scale, writing down statistics in a little book. There was also a column headlined “Performance.”

“It was all about whether I made mistakes or whether it was a clinically correct race,” he says. “That mattered to me then, and it matters to me now. I never gave myself 10 out of 10, even if I won the race, so yes, I am self-critical, without a doubt.”

The urge to compete and continuously improve helped Coulthard rise quickly in the racing rankings. In 1989, he graduated to Formula Ford and won the first-ever McLaren/Autosport Young Driver of the Year award. In 1992, he raced in the Formula 3000 series, finishing ninth, and in 1993 he improved to third overall.

And then, later in 1993, Coulthard landed what thousands of young drivers only dream of – a test driver contract for the world-champion team Williams. He stayed with Williams as a tester but following Ayrton Senna’s lethal crash at Imola, in Italy, in May 1994 he was promoted to race driver.

“You’d have to be a pretty cold-hearted bastard to hear that your teammate has been killed one moment and then think ‘yes, that’s my opportunity, this could be to my benefit,’ ” says Coulthard. “I did not think about how it would affect my position and career. It was just very, very sad.”

Coulthard kept his seat at Williams during the 1995 season and scored his maiden Formula 1 victory at that year’s Portuguese Grand Prix.

In 1996, Coulthard contracted with the McLaren team to drive alongside future champion Mika Häkkinen. This was the start of a nine-year relationship with the team, the second longest in Formula 1 history, behind only Michael Schumacher’s time with the Ferrari team. During this period, Coulthard racked up nine race wins and a second place in the drivers’ championship (2001).

Coulthard’s final Formula 1 drive was for the Red Bull team 2005–2008. The Austrian-owned Red Bull team emerged following the purchase of the Jaguar squad in 2004. As a new team, Red Bull was attracted to someone of Coulthard’s experience. Today Red Bull has developed into the dominant Formula 1 team, taking both the constructors’ and drivers’ titles in 2010 and 2011.

Coulthard says a number of factors have to fall into place in order to achieve this kind of success. “Obviously, money is a key issue,” he says. “You don’t necessarily need to have the most money, but you need to have enough.”

But even more important is to have the right people doing the right things.

“What happened at Red Bull was that we got the freedom to gather together the people and tools to do the job,” he explains. “You need a team that communicates and discusses things, and you need harmony in the team – even if you do not necessarily agree on everything. It’s important to share the praise when you are successful but also to not be scared about having a little failure.”

Coulthard points at another important factor for success, one the business world is familiar with – a constant striving for improvement.

“Even if we’d won the race, the team would sit down at the post-race analysis and say ‘What did we do wrong? What can we improve?’ ” he says. “This may sound odd, but we knew that all of our competitors were doing the same thing, trying to improve, and if we didn’t do it, we would soon be overtaken. As in business, you’re only as good as your weakest link.”

Coulthard left Formula 1 with 535 points, the highest-scoring British driver ever, beating Nigel Mansell’s previous record of 482 points. Coulthard also scored 13 wins and 62 podiums and is one of a handful of drivers who have competed in 200 or more Grand Prix.

Today Coulthard is still committed to the motor sport, driving in the German DTM series, doing commentary for Britain’s BBC and PR assignments for Red Bull. And the striving for constant improvement still permeates his outlook on the world. Faced with the usual question about what his favorite film or book is, he thinks for a while and then answers: “Well, I always try to look forward, so I’d say I have yet to see or read it.”