» Getting ahead by driving backwards 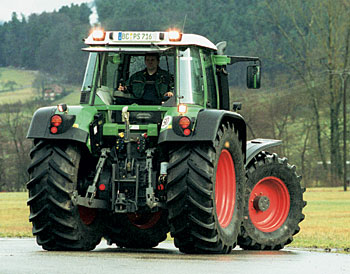 Getting ahead by driving backwards

Fendt customers wanted a smaller tractor that could drive backward as well as forward. Fendt turned to Neumaier Industrie-Technik to make that wish a reality.

Driving backward is no fun. Either you have to check desperately in all three mirrors at once, or you have to twist your neck, throw your arm over the passenger seat and try to steer with the remaining hand in the opposite direction from the way you want to go. Wouldn’t it be a lot easier if you could turn the whole seat around and have a set of controls for driving backward?

Of course it would – but who drives backward so often that it would be worth the expense? Well, what about tractor drivers? The German tractor manufacturer Fendt, part of the AGCO group, has been producing tractors with a reversible driving seat for some time. Andreas Löwel, head of sales engineering, says, “Our tractors are high-tech tools directed at people who need a tractor to offer the ultimate in efficiency. Such people often find it worth paying for a reverse drive facility to get that bit more out of their tractor.”

Mowing a meadow without damaging the unmown grass, cutting a way through snow that is too deep for the vehicle or cutting down young trees to make a firebreak in a forest – in such cases, you’ll want to push your tools, but you don’t get enough power and control if you just put them in front. Better to put them behind and drive backward.

Fendt’s system, which is an option in its big Favorit 900 Vario range, involves turning the entire seat and dashboard assembly around, but when users came to Fendt and said they wanted the same facility on smaller tractors, Fendt had to recognize that its 700 and 800 series didn’t have room in the cab to accomplish this. Another solution had to be found, and Fendt asked Neumaier Industrie-Technik to find it.

Another solution
Bernd Neumaier built his company on the back of his father’s tractor dealership in the small Schwarzwald town of Hofstetten, Germany. He grew it into one of Europe’s leading centers for all kinds of metal cutting and forming and has now moved further into system technology. “About four years ago I noticed that customers were always wanting more,” he says, “and I realized that either the market pushes you or you push the market.” That’s the attitude that led him to Fendt and a more ambitious project than he had undertaken before.

Neumaier’s solution to the lack of space was to leave the dashboard where it was and just turn the seat round. Fendt’s tractors already have the Variomatic joystick drive in the right armrest, which controls the Vario step-less gearbox. All Neumaier needed to do was to put the steering in the left armrest.

Easier said than done. That change meant “steering by wire” and a completely separate steering control system. In steering by wire, a small control wheel on the armrest is attached to sensors that send signals to a computer, which translates them into instructions for the steering hydraulics. The actual steered movement of the wheels is picked up by other sensors that send signals back to the computer, which determines when the steering has gone far enough and tells the hydraulics to stop.

That in itself would not be so difficult, but the whole system – cables, sensors and hydraulic valves – must be doubled for security, with the software swapping systems every time the tractor stops so that the backup system doesn’t stay unused. Neumaier commissioned the software from ProCon Elektronische System, a system partner of Sauer-Danfoss, which supplies the unit that converts the electrical signals into hydraulic pressure. “We started out thinking about the project simply,” says Udo Herth, head of ProCon, “but the demands grew as we worked on it.” In ProCon’s solution, the software allows an instant switch to the backup system when something goes wrong – with the driver noticing nothing but the warning message on the display. In addition, the system reflects real-life driving conditions. Because there’s not a direct response from the wheels to the steering control, as there is in a normal steering wheel, drivers could find themselves stuck in a rut, turning the control wheel even though the wheels wer
en’t turning any further. The system recognizes that such desperate turning shouldn’t be reflected in a sudden extreme position of the wheels.

Neumaier Industrie-Technik recognized that solving the electronics didn’t result in a functioning system. Fendt’s tractors were conceived without a reverse drive facility, and it all had to be fitted in somehow. So Neumaier took off the cab, cut out the floor and replaced it with one that allowed more space below the seat. The heating unit was relocated, a computer installed, brake and clutch pedals and control display added at the back of the cab, sensors and cables fitted to the front wheels, additional hydraulics squeezed in and the seat replaced on top of the patented turning mechanism. And a hinge was put in the normal steering column so the steering wheel could be folded away, allowing room for the seat to turn.

Drive options
The completed tractor has three drive options. In addition to normal drive, there’s an electronic forward drive that uses electronic steering, and the seat can be turned 30 degrees to either side, allowing the driver to check more easily on equipment the tractor is pulling. And then there’s the electronic reverse drive. That only comes into operation when the seat has been turned 180 degrees. The Vario joystick and the steering control reverse their direction automatically.

The electronic systems are not authorized for use on the road and are regulated for speeds up to about 15 miles per hour. But such fingertip control makes a lot of difference for operations that involve a lot of maneuvering, such as using a shovel to pick up hay bales. And the electronic system is ready for the future. “It can easily be linked up to GPS navigation,” says Neumaier, “or a laser scanner can be mounted on the tractor so it can drive itself around the field and accurately mow or plough without excessive overlap. That isn’t so easy with traditional hydraulic systems, but it will allow the driver to concentrate more on controlling the quality of his work. You’ll even be able to mow at night.”

Neumaier turns out one machine a week but hopes for more as the idea becomes better known. The Fendt contract is important to him: “Everything is here,” he says, “–  electronics, hydraulics, mechanics, steel, plastic. It shows we can do it, and the fact that Fendt gives us the tractors and allows us to deliver them direct to the customer is a sign of their trust in our quality.”

Andreas Löwel of Fendt knows that small energetic companies like Neumaier can fill gaps that a large company like Fendt can’t fill economically. “We specialize in making tractors that do exactly what customers want. The numbers involved here are too small for us, but the steer-by-wire technology has allowed us to increase the versatility of the tractor, reduce operating costs per hour and increase efficiency.”