» Grease with a longer life 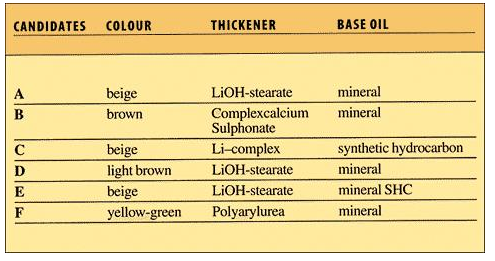 Grease with a longer life

Today all countries are becoming increasingly concerned with the environmental issues surrounding the use and consumption of lubricating greases. Already legislation has been introduced requiring users to account for the greases which have been consumed. The disposal of used greases becomes more difficult and the associated costs are extremely high.

The user is also placing higher demands on his supplier to provide bearings, grease and seals with a longer life. In order to satisfy these new and much more stringent demands the products supplied have to be to a higher specification.

These trends are not unique to the steel industry. Other industries such as pulp and paper, mining, cement, etc. are also demanding products to a higher specification.

Industry today in order to remain competitive is required to increase production while reducing costs. Longer bearing life equates to less downtime. Greases to a higher performance specification equate to a reduction in consumption.

Having a global presence and a close cooperation with manufacturers and users alike means SKF is able to identify trends.

Using the knowledge of future bearing design at SKF’s International Product Divisions lubrication parameters can be identified. Combining this knowledge with the field experience of industry specialists from either the Business Support Team, Application and Service Engineers, a detailed technical specification can be developed.

Using the SKF Engineering and Research Centre in The Netherlands the submitted greases can be evaluated using bearing related testing standards specifically developed by SKF.

SKF identified that the lubricating greases used in the steel industry particularly in the continuous casting area did not satisfy the future demands. From field experience it was seen that the most widely used greases were deficient in some of the established performance parameters.

These grease performance parameters had been identified as:

A grease satisfying these performance parameters would be suitable for use in an application with the following demands:

The chosen grease should also be technically superior to the main brands used today but offering a major cost benefit to the user.

The industry-accepted standards for testing the performance of a lubricating grease are not bearing performance related. SKF had therefore to develop a number of tests specifically to evaluate the submitted greases for this project.

Some of these were:

It is apparent that the testing methods used today have not kept pace with the development of lubricating greases. More importantly these test methods have no direct relationship to the application. SKF sees a need for the use of more application orientated testing methods to be able to assess the greases performance.

In 1989 a test programme had been instigated to establish what was the best grease available in the market for use in continuous casting applications. Samples of the most widely used greases in the steel industry at that time were taken and tested in accordance with the technical specification in figure 1.

From this exercise one grease was identified which fulfilled the majority of the requirements. This information was then used in the development of the new product. The weaknesses in this grease were deemed to be the critical performance requirements.

An invitation was extended to six major grease manufacturers to develop a product based on the technical specification fulfilling the testing parameters. The composition of the grease i. e. base oil, thickener and additive package was left to the grease manufacturer to chose. In this way the strength of SKF in identifying the critical performance requirements is combined with the grease manufacturers strength in product development. (see figure 2)
From the tested candidate greases it is worth commenting on some of the findings. These weaknesses in the submitted greases have also been found in grease used in other demanding applications i. e. railway.

For many years research work proved that the correct choice of extreme pressure additives was important. This work identified that a chemical reaction took place between the grease and the bearing at high temperature. Within the steel industry the grease can be exposed to very high temperatures for short periods of time. Two of the candidate greases proved to be highly aggressive towards the bearing steel after 24 hours at 160 °C.

In an environment where the usage of water and/or emulsions is very common it is important that the grease is able to resist being washed out after filling into the bearing. Three of the candidate greases proved to be completely unsuitable for use in the presence of water. Upon the completion of a standardised test method they had dissolved.

For a number of years we have seen that greases lose their stability properties in applications which are subject to vibrations. This is a serious problem in the railway and mining industries where mechanical stability of the greases is important. The exact reason for this deterioration is not satisfactorily proven but a number of theories have been put forward. Some of the theories relate to a reduction in the percentage of thickener in the grease, the use of cleaner base oils and a move away from the conventional additive systems i. e. from lead to low ash systems (see figure 3).
From the table of results comparing the various greases it can be seen that Candidate B proved to be technically the best grease. When it was compared to the previously identified grease which was used as the bench mark it was also found to be superior.

Candidate B and the bench marked grease were then subjected to a further series of tests. These additional tests investigated seal compatibility, further high performance tests (continuous running for one week at 180 °C and 24 hours at 200 °C) and under simulated conditions for continuous casting.

In the above mentioned tests comparisons were also made with a number of other greases which competitors had introduced into the market for this specific application area.

While normally a grease of this viscosity would not be used to lubricate ball bearings, it was tested in a ball bearing at 10,000 rev/min and 130 °C until failure. The L50 life under these conditions was found to be 1,300 hours.

In the laboratory further work was under-taken to establish the rate and quantity of oil which ‘bleeds’ from the grease. This information is useful to determine at what temperature a satisfactory oil film will build up in an application.

Good correlation of test results between two different laboratories is very difficult to achieve even where a long-standing relationship exists. The causes for this are difficult to pinpoint but highlight the need for more reliable and clearly defined testing standards. In the case of candidate B a good correlation of test results was obtained between those found by ERC and the manufacturers laboratory (see figure 4).

With the inclusion of LGHB 2 for continuous casting machines and roller tables SKF is able to offer a comprehensive range of products to the steel industry. From the existing programme LGMB 2 is used in rolling mill applications, while for converters and sintering plant applications LGEV 2 is recommended.

SKF was able to foresee the problems experienced in the field. By using this knowledge combined with the experience of the grease manufacturers it was possible to develop an outstanding product. With the trend towards the use of more sealed and prelubricated bearings lubrication knowledge is seen within SKF to be of strategic competence. The consumers of bearings require a complete solution to their problems. Advice and recommendations are required to solve bearing, sealing and lubrication problems.

SKF recognises that lubrication is a strategic competence within the organisation. However the level of lubrication knowledge is not widely spread. In order to improve this knowledge base amongst the SKF personnel a three-day course on lubrication was developed. Already many people have participated in the course in Europe and the United States. In 1995 further training will be given in Asia and Europe.

From this project a superior lubricating grease was developed offering to users a cost effective solution to their problems.