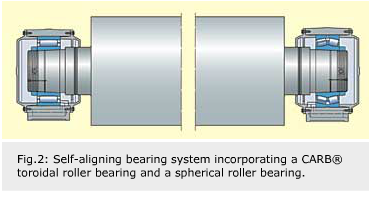 In the paper industry, there is a strong focus on increasing output and efficiency. Paper mills concentrate on uptime and rebuilds to increase speed while machinery manufacturers design wider and faster machines. Today, the fastest newsprint machines run at around 1,900 meters (6,200 feet) per minute, and some have design speed ratings in excess of 2,000 meters (6,600 feet) per minute. Speeds will continue to increase and, in the not-too-distant future, we can expect to see machines capable of 3,000 meters (9,800 feet) per minute, which would significantly increase demands on both machinery and components (fig.1).

CARB® in paper applications
Since its launch of CARB® bearings in 1995, SKF has recommended this toroidal roller bearing as the non-locating bearing in all applications that experience axial shaft expansion and need self-aligning properties. The combination of a CARB bearing on the non-locating side and a spherical roller bearing on the drive side has been shown to produce low friction and the longest bearing service life (fig.2). Furthermore, as the non-locating function in a CARB bearing is frictionless and does not create any internal thrust loads, vibration also is often significantly reduced. In contrast, more traditional arrangements with two spherical roller bearings can generate internal thrust loads because of the friction between the non-locating bearing outer ring and the housing where the axial shaft expansion is taken up. Such loading conditions will reduce bearing service life. Because of the friction generated in arrangements with two spherical roller bearings, they are not an optimal solution in most cases.

For these reasons, high-speed bearing arrangements, such as those found in paper machines, should include a CARB and a spherical roller bearing in the non-locating and locating positions, respectively. As future paper speeds of 3,000 meters (9,800 feet) per minute correspond to approximately three times the reference speed rating given in the SKF General Catalogue, the internal design of the bearing must be suitable for the operating conditions. Due consideration must be given to temperature differences between bearing components, to forces created in the contact areas, and to stresses caused by rotation. Consequently, internal geometry, tolerances, surface roughness and texture need to be optimized to achieve the necessary oil film build-up and to minimize friction. Even if bearings are not the major source of vibration and noise in paper machines, these should be minimized, particularly for high-speed applications. This can be achieved by using high running accuracy bearings (fig.3). Finally, to obtain the highest possible reliability and service life, material and hardening must be taken into consideration.

Dedicated bearing range
Based on the need for bearings suitable for future generations of high-speed paper machines, SKF has developed the VA460 range. In addition to being optimized from an internal design and accuracy point of view, the CARB and spherical roller bearings in the range are also of SKF Explorer performance class. Such bearings are made from extremely clean and homogeneous steel, and the patented heat treatment process provides increased wear resistance without compromising material toughness. The bearings in this range have a very high running accuracy (20% better than ISO precision class 5). In addition, the bearings have been designed for easy mounting and can be fitted with the optional SensorMount® feature.