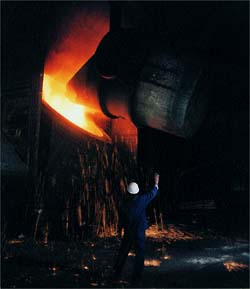 U.S. company Bethlehem Steel uses 228 cranes to keep the flow of materials moving through the manufacturing process at its Indiana facility.

U.S. company Bethlehem Steel uses 228 cranes to keep the flow of materials moving through the manufacturing process at its Indiana facility.

Perhaps the easiest way to get an idea of the size and complexity of Bethlehem Steel’s facility in Burns Harbor, Indiana, is to start looking at numbers. It employs 6,000 workers and covers about 3,000 acres. In 1996, it purchased about 1 billion U.S. dollars in goods and services, and the plant spends about $300,000 a day to purchase electricity, natural gas and potable water. It is one of the largest integrated steel plants in the world, producing more than 5 million tons of steel every year, much of it destined for the automotive industry.
Burns Harbor is situated southeast of Chicago, along the shores of Lake Michigan. From the road running in front of the plant, one can see dark, massive buildings rising against the horizon and a gray plume of steam shooting into the sky. While it has become popular to refer to the late 20th century as a post-industrial era, it’s clear from walking around the Burns Harbor plant that heavy manufacturing is still a thriving business. Cars, bridges, filing cabinets and all kinds of assorted products still need to be made, and this is one of the places that provide the raw material: high-quality steel.

Huge and beautiful
According to Charlie Totten, general foreman in the service shops and terminal maintenance department at the Burns Harbor plant, steel is manufactured 24 hours a day, seven days a week without stop. A key element in all the phases of this operation is the cranes – “huge, beautiful machines,” as Totten describes them – which have the job of moving the steel around the plant. There are 228 of these mechanical creatures scattered throughout Burns Harbor. “There’s a man or woman inside the crane riding along an 1,800-foot runway,” says Totten. “In a little over six months, these cranes will travel 2,000 miles on that little runway. The cranes we have are what we call ‘cadillac cranes,’ meaning that they’re designed according to Association of Iron and Steel Engineers’ specifications for steel mills. They’re built to last a minimum of 20 years. And the machinery within the cranes, such as the bearings, should last a minimum of 10 years.”
With 228 cranes working in the production of steel, any mechanical breakdown will lead to lost productivity. On the crane, the part that is most vulnerable to wearing out is the wheel assembly. There are 2,500 wheel assemblies in the cranes at Burns Harbor, and since 1978 the company has dedicated itself to eliminating failures. “There is no other steel plant that has worked as diligently to keep these things from failing as we have,” says Totten. “How do we do that? By analyzing the failures.”
Because bearings are rotating parts with many components, bearing failures were expected to be the most difficult problem to solve in the crane wheel assembly. In the early 1980s a large proportion of bearing failures was due to insufficient lubrication. When Bethlehem Steel began implementing an SKF-patented polyoil feature – essentially a self-lubricating bearing – failures began to drop. But by the late 1980s, bearing failures began to rise again, and it was discovered that the permanent lubrication pack deteriorated and the bearing would fail due to lack of lubricant.
“What was happening,” says Totten, “is that the synthetic oil would leak away as it got warm. So we talked with SKF, and they agreed that the polyoil bearings should be packed with a compatible grease to keep that from happening.” Since then, bearing failures have been gradually declining. “You have to stay on top of this. We have millions of dollars worth of equipment sitting here, and you cannot let it sit idle. The more orders we fill on time, the more orders we get. And that keeps everybody working.” Not surprisingly, the plant has a number of utilities on site to help provide the power needed for all this machinery. The single power station is designed to use byproduct fuels from the coke ovens and blast furnaces to produce steam and generate electricity. Excess coke oven gas is piped to the power station, as is excessive blast furnace gas not needed for firing the stoves. Water for the plant is drawn from Lake Michigan and is returned to the lake after extensive waste treatment – in a cleaner state than it was originally.

Making steel
A key to the plant’s efficiency lies in its design. Every phase of the manufacturing process flows in one direction, from west to east. Raw materials arrive at the west end of the plant and are converted into iron and steel as they move toward the shipping docks. The process begins with coal from West Virginia that has been mined and cleaned. The coal is shipped to Burns Harbor by railroad and converted to coke in one of the plant’s 82 tightly sealed coke ovens, where it is baked without oxygen for about 18 hours. The coke winds up being 90 percent pure carbon and is used for fuel in the blast furnaces.
In the process of making iron, the coke and other raw materials are fed into the top of the blast furnace by a conveyor belt.
A blast of hot air is forced into the furnace, igniting the coke and eventually melting the other raw materials. The molten iron is collected in a pool inside the furnace and is released through a taphole, flowing into a metal transfer car that carries the iron to the steelmaking shop where it is refined into steel in basic oxygen furnaces (BOF). In the BOF shop, the molten iron, steel scrap and fluxes such as burned lime, dolomitic lime and spar are added to obtain the right chemical analysis. Liquid oxygen is blown into the furnace with supersonic velocity producing a temperature of about 3,000 degrees Fahrenheit. The high temperatures and chemical reactions oxidize the impurities in the metal, converting the iron into steel. Each of Burns Harbor’s three BOFs can make about 300 tons of molten steel in 30 minutes.
In the casting process, the molten steel is converted into semi-finished slabs. The molten steel is poured from a huge ladle through a series of copper molds as it is cooled by water. In about 45 minutes, it emerges as a continuous slab of steel that is then cut into slabs and transported to the slab yards. In the hot-strip mill, 10-inch-thick slabs of steel weighing up to 20 tons are heated to more than 1,800 degrees Fahrenheit and fed through a series of 12 rolling stands.
The slabs are squeezed, making them longer and thinner, until they are less than a half inch thick and about a half mile long. They are then cooled and wound into coils. Some of these coils are sold directly to customers but the majority go on to the cold-sheet mill for further processing. There the coils are unwound and reduced further in thickness according to the customer’s specifications.
After the reduction, the steel is cut again and wound into coils, eventually making its way to the temper mill, where its hardness is restored and given the desired surface texture. Pointing to these gigantic coils of steel, Totten observes: “If you want to know one of the reasons why we have a high standard of living, you’re looking at it. Most people don’t realize it, but high-quality steel at a reasonable price is the basis for many of the things that we own.”

Chris Petrakos
a business journalist based in Chicago
photoTim Walsh