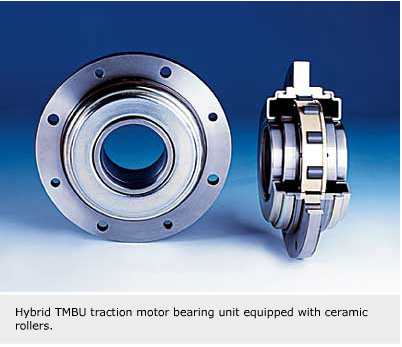 Today there is an increased public and political awareness of the need for collective mobility, especially in crowded city and suburban areas. This opens new opportunities for further development of mass-transit systems and, as a consequence, encourages the rolling stock industry to pursue novel solutions. Innovative generations of suburban trains, metros, tramways and trolley buses have been developed, which offer superior quality in transportation and lower life-cycle cost.

For 140 years the Škoda brand has been well known for all kinds of vehicles and machinery equipment. Škoda Trakcní Motory (Škoda traction motors) is now becoming the main operation of the newly established company Škoda Electric s.r.o. situated in Plzeň in the Czech Republic. Since February 2003, this company has been owned by the Appian Group. Škoda Trakcní Motory is a main supplier of electric traction motors and auxiliary motors used for compressors and fans. Škoda delivers the drive systems to the world railway industry, especially in Austria, Germany and the United States, as well as to the home market in the Czech Republic. A main focus in the product portfolio is on traction motors for all kinds of mass-transit applications. Škoda Trakcní Motory investigated in detail how to simplify the bearing arrangement and how to achieve longer maintenance intervals. In 1996 the first tests were made with traction motor bearing units (TMBUs) and this concept is now applied to most new traction motor designs.

Technical features
The key to a lower life-cycle cost is design. The trend in the railway industry is the increased use of ready-to-mount bearing units. The TMBU is a pre-lubricated and sealed unit, which is a ready-to-mount subsystem. The unit is flanged directly to the traction motor shield, thereby simplifying the mounting process. This concept requires less space and fewer parts. The sealing system on both sides of the TMBU is based on very effective non-contact labyrinth seals.

To prevent the bearing unit from damage caused by electric current passage, electrical insulation – especially with AC motor technology – is compulsory. This can be achieved by insulating the TMBU with a ceramic layer, like the INSOCOAT® concept developed by SKF. The coating consists of aluminium oxide and is applied by a special plasma spraying process.

The next development step was made by using the hybrid bearing concept based on ceramic rolling elements of silicon nitride. These balls or rollers are electrical insulators. Under DC conditions, for example, the open hybrid bearing (without seals or shields) is an insulator in the order of several GΩ. The hybrid bearing becomes a very effective tool for breaking current paths through the rolling element-raceway contact. Furthermore, and most important, under high-frequency AC conditions the ceramic rolling elements of a hybrid bearing act as a dielectric element between the inner and outer rings so that the capacitance of a hybrid bearing is very low (in the order of picoFarads). The relatively large diameter of the rolling elements, the small size of the raceway contacts and the low relative dielectric constant (εr) of the silicon nitride gives impedances of above 1 kΩ even at frequencies of 1 MHz. Thus, the hybrid technology is extremely effective at protecting against electrical damage to bearings, particularly in high-frequency environments.
Main advantages of the hybrid bearing concept are:

Grease life
The main advantage of the pre-lubricated unit concept is that proper grease filling with the right quantity and the right distribution is done with high cleanliness in an optimized bearing factory environment.

The grease life is one of the most important factors when specifying the maintenance intervals. For the TMBU product range, several special high-performance greases have been tested simultaneously in a back-to-back arrangement at the SKF Development Center at Steyr in Austria. Typical speed cycles were defined, based on the customer specification and further field measurements obtained with sensorizedTMBUs. In principle, the cycle was like a stop-and-go regimen at continuous high temperatures. A temperature of 120° C (248° F) was continuously applied during the first step of the laboratory testing. After detailed investigations of the results, a further back-to-back test was made at
105° C (221° F). The aim of this long-term testing was to define the correlation between the established SKF grease-life calculation model and the laboratory test results for this specific unit design and its related application parameters.

The measured temperature for long-term field service was much lower than the one obtained during laboratory testing. Based on the laboratory results, a realistic grease life in the field was predicted by using recalculating methods, which confidently allows the choice of the best-performing grease as standard across the TMBU product range.

Further tests were made to investigate the selection of the cage material and design optimization and to study the increased grease performance opportunities of hybrid bearings with ceramic rolling elements.

In combination with the hybrid bearing concept, the grease life can be further extended. As a medium target, a mileage of 1.5 million km (930,000 miles) in mass-transit operation should be achievable without re-lubrication or any other interim maintenance. The target correlates with a mid-life inspection regimen, taking into consideration a total mileage of 3 million km (1.9 million miles). This corresponds, in many cases, to 25 years, assuming an average mileage of 120,000 km (75,000 miles) per year. The recommended maintenance intervals have to be specified on a case-by-case basis after investigating application parameters such as speed and temperature patterns, etc.

Gaining long-term field experience under realistic operational conditions unfortunately takes a lot of time, though the longest field experience is based now on eight years in regular operation. During that time several grease samples were tested in the laboratory to investigate the grease condition, wear particles and so forth. Field experience has so far fully confirmed the original expectations.

User benefits
The main user benefit is the lower life-cycle cost related to significantly longer maintenance intervals based on a much longer grease life. In addition there are space-saving opportunities that offer either a shorter traction motor design or a longer iron length of the rotor/stator package and increased power. Overall, the quality of the bearing installation process is improved via the ready-to-mount unit concept and the need to handle fewer parts. Reliability is also increased by the avoidance of any damage arising from electrical current passage, either by using the INSOCOAT® coating execution or the further advanced hybrid concept based on ceramic rolling elements.

The classical traction motor design is based on two bearings, one on each side of the rotor. The TMBU equipped with a set of balls takes care of positioning the rotor in axial direction and carries radial and axial load. The power is transmitted via a cardan shaft to the gearbox. On the other side, the TMBU has even a smaller size and is equipped with a set of rollers, carrying only radial load. A steering servo pump and other equipment can be flanged here.

This design is applied, for example, to traction motors of trolley buses operating in numerous locations, including Linz and Salzburg in Austria, Minsk in Belarus, Hradec Králové and Plze in the Czech Republic, Lyon in France, Esslingen and Solingen in Germany, Athens in Greece (two larger contracts), Budapest in Hungary, Bologna, Milan, Modena and Parma in Italy, Bucarest in Romania, Arnhem in the Netherlands, Bern and Biel in Switzerland and Boston (two major contracts) in the U.S. For the preparation of the Olympic games in 2004 in Athens a larger number of trolley buses went into operation. These Škoda motors are equipped with a TMBU on each side of the rotor.

Most of these designs are for low-floor trolley buses, which can be entered easily. These designs are very challenging because the lowered floor limits the space for the drive system. A further application of the Škoda trolley bus motor concept is the special design for work locomotives of the Paris Metro.

The single-bearing traction motor design is based on a TMBU with a roller set on one side. On the opposite side the power is transmitted directly to the gearbox via a coupling. The main applications are the new German light rail vehicles operating in Bonn and Cologne, which also serve as the connection between these two cities. Another German application is the low-floor tramway at Schwerin, where most of the lines operate on a newly built reserved track to connect the suburbs.

Outlook
The latest stage of development is the TMBU design with integrated sensors to detect speed and operating bearing temperature. The speed signal is used for the AC drive control system. The sensor housing is directly flanged on the stationary part of the labyrinth sealing system, and the impulse wheel function is integrated into the rotating part of the sealing system.

In conclusion, the traction motor bearing unit design concept offers new opportunities to achieve lower life-cycle cost through longer maintenance intervals. This design saves both space and parts and it is also easy to mount. Experience has so far confirmed the expectations of a significantly extended maintenance regimen.