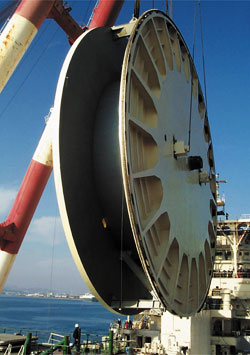 A new pipe-laying vessel, the CSO Deep Blue, is pushing the envelope of what is possible in deepwater piping. It will have the capacity to lay more pipe deeper than any previous vessel.As the leading sub-sea solutions provider to the global oil and gas industry, Coflexip Stena Offshore Ltd. (CSO), a multinational based in France, runs a formidable fleet of pipe-laying vessels. The fleet, which includes four pipe-laying vessels, a trenching vessel and 10 sub-sea construction vessels, travels the seven seas to lay pipelines between offshore platforms and land.
The $162 million CSO Deep Blue is the latest, and most significant, addition to the fleet. Built by the Hyundai Mipo Dockyard in Ulsan, Korea, and fitted by Huisman Itrec in the Netherlands, the 55,000-ton vessel will be fully commissioned in the second quarter of 2001. Using the latest technology, the ship has the unusual ability to lay up to 5,500 tons of coiled and rigid pre-welded steel pipe at depths of up to 8,000 feet.
The ship’s specifications speak for themselves. Once operational, CSO Deep Blue will be able to carry a payload of 11,000 tons of spooled pipes, which includes 5,500 tons of rigid steel pipes and 3,800 tons of flexible lines, together with other equipment. The ship is 675 feet long and has a beam of 105 feet.
The design of the reels, which sit atop the superstructure of the ship, enables pipes that are welded on land to be continuously uncoiled at sea in lengths from up to eight miles of 400-millimeter pipe to 207 miles of 60-millimeter pipe; 207 miles is roughly the distance between New York and Washington D.C., or Paris and Brussels. Coiling the rigid steel pipe around a spool does not cause any material weakness in the pipe, because the pipe is only bent and straightened once.
The main advantage of welding the pipes on land is quality and economy for CSO’s customers. Welding pipes in gale force wind on a rocky sea isn’t easy. And with the CSO Deep Blue, fewer trips back to shore are required to load up on pipes, compared with smaller ships. The vessel, which berths 120 sailors and engineers, has a top cruising speed of 13 knots. This allows for short transit times back to shore, and shorter international transit times between projects.
Even before its launch, the CSO Deep Blue has been proposed as the main pipe-laying vessel for Elf’s Canyon Express pipeline project in the Gulf of Mexico, which is scheduled to start in the third quarter of 2001, reports the online version of Offshore Shipping magazine.
According to the same source, CSO has announced plans to build a spooling facility in Mobile, Alabama, to support its offshore pipe laying and construction work for both the CSO Deep Blue and its half-sized cousin, the CSO Apache. The 130-acre site will include a deepwater dock, road and rail access, storage areas and infrastructure for high-specification pipe welding. Depending upon CSO Deep Blue’s future assignments, similar spooling facilities could be built in other locations around the world, reports CSO on its Web site.
For CSO, the launch of the CSO Deep Blue represents the company’s biggest single investment to adapt its fleet to the deep and ultra deepwater requirements of its clients. In 1999, according to the magazine Underwater Contractor International, CSO helped bring 11 new oilfields on stream in the North Sea alone.
CSO’s fleet is deployed around the world, or wherever oil needs to be pipelined to shore from offshore oil platforms. Current projects include the Cabgoc Kuito field off the coast of Angola. For Petrobras, the Brazilian oil company, CSO ships achieved a world record in 1999 by laying flexible pipe at a depth of 6,177 feet.
Projects are ongoing also in India and Australia.
CSO’s newly built trenching vessel, the CSO Normand Pioneer, was called out in August 2000 to transport the LR 5, the British Royal Navy’s rescue submersible, to the site of the Kursk, the lost Russian nuclear submarine.
Unfortunately, the LR 5 was never deployed because the Kursk was completely flooded.