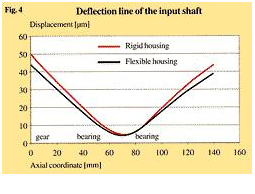 Traditionally, bearings have been considered as stiff hinges and the shafts as inflexible beams with resultant forces on supports calculated according to classical isostatic resolution techniques.

A first step in approving overall gearbox design is to assume that bearings are non-linear yielding elements and that the shafts are flexible. This allows the deflection line of the shaft and the influence of both shaft and bearing deflections on the resultant forces on the supports to be considered.

With a more advanced approach to analysis it is also possible to consider a range of other important parameters such as internal bearing geometry, clearance or bearing preload, actual number of rolling elements under load and, for roller bearings, distribution of the contact pressure along the generating line of the rolling element.

Bearing choice is also carried out with reference to specific bearing properties including behaviour under misalignment between inner and outer ring during operation. In this case, it is still assumed that the bearings are installed in rigid housings. For this reason, the stiffer the actual housing, the closer the calculations are to real situations.

The use of lightweight materials and compact housings is a feature of high volume gearboxes of low to medium power. In such cases, an optimised design is important for product competitiveness.

The housing-shaft-bearing system as a whole has to be analysed taking into account all interaction factors in order to create a reliable and appropriate housing design that will meet precisely its operating requirements.

SKF itself has developed a number of computer programs which can calculate aspects of such designs. For example, one program is able to predict bearing and shaft behaviour under load. Often a limiting factor which reduces accuracy for such programs arises when the housing stiffness begins to influence the bearing position. Also a more accurate way of estimating any gear wheel performance demands that misalignment is defined correctly.

One of SKF’s latest computer programs can handle the very complex interaction of such systems. This program uses a Finite Element Method model and can be based on experimental measures of deformation under load.

FEM modelling techniques can be applied to all the components – bearings, shafts, gears, housing, springs, washers – in this program.

In this article we will not describe the FEM more deeply but will only say that it allows the structure of each component to be broken down into such small ‘finite elements’ that the shape of their displacement and stress fields can be approximated with some accuracy, leaving only the magnitude to be calculated.

Each element is described by a number of ‘nodes’ and the behaviour of each node (i.e. its influence on other nodes) which is then expressed mathematically by a matrix called the stiffness matrix.

All the matrices of each element are then combined in such a way as to create a stiffness matrix for the whole system which can be solved and all the node displacements and associated forces can be evaluated.

For the latest SKF FEM program, the shafts are represented by simple beam elements while the gears have several nodes – one which defines the centre point and one at each side of the gear flanks.

Representing a bearing as an FEM model provides more of a challenge. This is because Hertzian theory shows that there is a non-linear relationship between forces and displacements in the contact zone. There are also additional parameters that have to be taken into account – bearing internal geometry, clearance, preload and misalignments between rings. For roller bearings there is the pressure distribution along the contact line, roller profile etc.

Each bearing can be modelled by one node per ring – each node is placed in the centre of the ring and has six degrees of freedom. Internal load distribution is described in a special module.

This allows us to consider the effect of the relative displacements and misalignments of the bearing on bearing life. However, there is the question of how the housing should be represented. The enormous variety in the shape of the housings makes it impossible to find a single parametric representation and so a suitable model from a software supplier can sometimes be sought. In some cases a gearbox manufacturer may already have an FEM model of housing available as part of its own optimisation work. Both sources can then be used to solve the matrix for the whole structure.

A stiffness matrix for a housing can also be derived from physical measurements of real models though this is inappropriate unless at a later stage of development or if there is a limited number of bearings. Such measurements also require skill and appropriate equipment. Also when defining any FEM for use with the SKF program, a number of simple ‘rules’ have to be followed for successful results.

A full housing-shaft-bearing system analysis was carried out during the development phase of a gearbox design at Bonfiglioli Riduttori in Italy (see figure 1). This gearbox is a small dimension, high volume unit (see figure 2) with an aluminium housing. This factor justified investigation of its behaviour under load conditions.

An important factor for the success of the final design was the close co-operation between SKF and Bonfiglioli Riduttori engineers from an early stage of the development process. The housing model had to evolve in such a way that it could be successfully integrated into the SKF calculation program.

In this application, each bearing in the system was represented by two nodes, with the housing model comprising solid elements, each with six degrees of freedom for each node.

The model shown has around 8,000 nodes and 14,000 individual elements. However, for the evaluation of the effects of housing deflection on bearings and shafts, it is sufficient to know the behaviour of the six nodes representing the centres of the bearing seatings. This is obtained by reducing the original large stiffness matrix into a smaller, more manageable one.

The method of doing this is known as the ‘super-element’ procedure. In this application a reduced stiffness matrix was created and 36 rows by 36 columns were loaded into the SKF program that solves the complete system (see figure 3).

Figure 4 shows the deflection line of the input shaft for both rigid and flexible housing. Displacements along the shaft are higher for a flexible housing when compared with a rigid bearing seating. In this case, however, the difference between the two are not large enough to influence gear performance negatively while the most valuable effect comes from the misalignments both for the bearings and the gear wheels (see figure 5).

As the gearbox is equipped with deep groove ball bearings, the various misalignments do not significantly affect bearing life (see figure 6) because the actual maximum values are far lower than the recommended limits for this type of bearing.

In addition, bearing life is also influenced by the different load distribution over the rolling elements. This explains why direct relation between bearing misalignments and relevant life expectancy cannot be established.

This method also allows better simulation of the stress fields in the housing through introduction of the load distribution in the bearing seating under specific operating conditions.

In critical cases a deeper and more sophisticated analysis is possible by modelling the bearings with two nodes for each rolling element and by treating the rings as flexible. In this way, the ovality effect can be taken into account.

This complete analysis of the housing-shaft-bearing system allowed all the individual components to be optimised. In addition, the housing and the shafts were checked and all their deformation effects included in the bearing and wheel lives calculation.

In this particular application, the final advanced analysis confirmed the optimised design and full integration of the gearbox components.