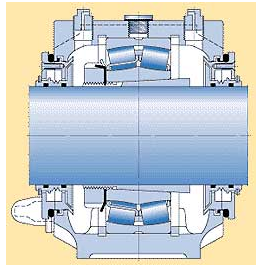 Conventional seals intended for standard bearing housings have been developed mainly for use with grease lubricated bearings. Oil lubrication places increased demands on the sealing function if unacceptable leakage is to be prevented.

To meet these demands as well as increasingly stringent environmental requirements, SKF has pursued a development project aimed at developing an effective seal. Verified laboratory tests at the SKF Engineering & Research Centre (ERC) demonstrated that the seal developed was very successful in preventing leakage.

The seal, shown in figure 1, consists of three main parts. Two of these are mounted in the bearing housing and, together with two O-rings, form the stationary part of the seal. The third rotating part seals against the shaft by means of two hollow O-rings made of silicone rubber. These hollow soft O-rings provide this part of the seal with freedom of axial movement, and can thus easily accommodate longitudinal thermal expansion of the shaft. Silicone rubber has been selected in order to make the seal capable of withstanding continuous operating temperatures in excess of 100 °C.

The function of the part of the seal which is mounted on the shaft is to create a differential pressure in the seal by means of the rotating disc, so that the oil mist inside the bearing housing will be prevented from escaping. A chamber is provided behind the disc to collect the oil and drain it back into the oil bath in the bearing housing.

An area in which rigorous demands are made on lubrication are the flue gas fans that serve as a vital element in district heating boiler plants. Bearing applications with high speeds and high operating temperatures generally need oil lubrication.

The recently developed seal has produced excellent results in many such boiler plants. One example is at Perstorp Energi AB (photo 1) which supplies electrical energy and steam to its parent company, Perstorp AB. One of the four boilers is fired with peat, wood chips and residual products from the company’s manufacturing process. The solid-fuel boiler was built in 1991 and, with a rating of 55 MW, was then the world’s only industrial circulating fluidised bed boiler of its size. The flue gas fan was replaced in 1994 and equipped with oil-lubricated bearings mounted in SNH bearing housings, which were later fitted with the new seals for oil lubrication (photo 2). The fan, which rotates at
2910 r/min, is rated for a flue gas flow rate of about 5 m3/s at 165 °C. This large fan, which has been supplied by ABB Fläkt Industri AB, is driven by an electric motor through a flexible coupling.

The fan shaft is mounted in two SKF spherical roller bearings 22215 EK/C3 mounted on adapter sleeves. The two bearing housings, which are equipped with the new oil seals, are designated SNH 215 TURU (fig. 2). The bearings are continuously supplied with small quantities of oil (photo 3). The bearing temperature is normally between 70 and 80 °C.

Since its modification, the fan has been trouble-free, providing the plant with a very satisfactory fan system. Moreover, the plant has very low emissions of nitrogen oxides, sulphur and hydrocarbon compounds, which is due to the high (800 °C) and uniform combustion temperature in the fluidized bed. This has resulted in positive recognition by Sweden’s Environment Protection Agency.