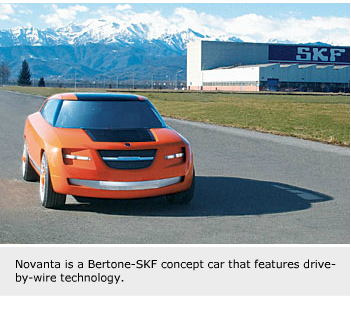 The concept car has been shown by scientific research to be a valid design, and a strong market has been identified. The next major hurdle is to gain approval from the various national and international standards organizations whose task it is to ensure public safety and approve the wider acceptance of new technologies. The image of the Novanta concept car in front of the European Parliament in Strasbourg testifies, in a symbolic way, that the first move toward commercial advanced technologies for sustainable transport systems has been made.

Drive-by-wire experience
On September 23, 2002, several comparative tests were carried out at the Hockenheim Formula One Grand Prix circuit. The Novanta is based upon the experience of the first Bertone-SKF drive-by-wire concept car – the Filo. The new design and driving behavior of the Novanta further builds on Filo and underlines the growing maturity and reliability of this advanced technology. When compared with the Bertone-SKF Filo, the Novanta demonstrates much-improved steering feedback and feel, as well as improvements in the braking system and transmission interfacing.

The driver’s control unit – the Guida – has been significantly refined, compared with the Filo. Position and load sensors incorporated in the unit send a continuous flow of data to the actuator control units of the smart actuating units along a “fault tolerant” communication network. The two interlinked steering yokes have a maximum rotation of 20° about the center, straight-ahead, position, controlling the movement of the steered wheels through a smart actuation unit that replaces the conventional rack-and-pinion assembly. The movement of the Guida’s yokes cause greater movement of the steered wheels at lower vehicle speeds, the sensitivity reducing as vehicle speed increases. An accurate and intuitive feedback on the car’s dynamic behavior is crucial for driver comfort and, above all, for safety.

Apart from the Guida, the only interface with the vehicle lies hidden behind a luminous strip that runs the entire length of the passenger compartment. With a light finger touch on the central orange screen, it is possible to interact with a Nokia Communicator. The large dashboard is a true smart navigation system. It incorporates a miniature fingerprint scanner – a unique “password” used to start the vehicle and activate the car’s nerve system. Data about individual driving preferences and seat position, air conditioning, refuelling reminders, technical checks and even music can be stored. The large interior space enhances the sound system. A compact module of Bose Corporation’s surround-sound system delivers high-quality sound reproduction. Thanks to this sophisticated biometric

system, maximum on-board customization is achieved. Supported by sophisticated options, a trip can start with nothing more complex than the touch of a finger on the scanner.

SKF team
An SKF team of 12 people was involved in the project, drawn from specialized areas within the overall SKF Group: Drive-by-Wire (Automotive Division), Transrol (Industrial Division) and Sensorized Bearings (Electrical Division).The work was handled in the Airasca production plant.

To complete the project, it was necessary to integrate it with further technological content covering both mechanical components and software. The result has been higher comfort and safety levels. If Filo was positively surprising for the introduction of innovative smart electro-mechanical actuating units into steering, braking and transmission systems with integrated redundancy, then Novanta has now convinced even the most sceptical drivers about speed and performance of various by-wire functions.