» On the right track 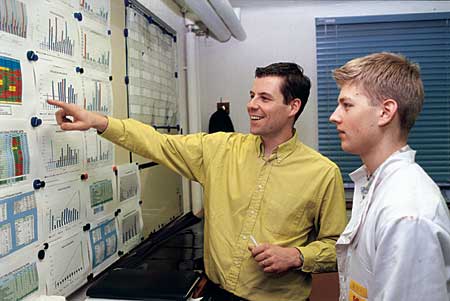 Unplanned downtime was cut by half when Kodak partnered with SKF to improve the reliability of its Track Five sensitizing machine.

Kodak’s huge EKTAcolor sensitizing machine is housed in what is one of Europe’s largest brick buildings, solid and rising above the sprawling northwest London suburb of Harrow. The machine – known as “Track Five” – is a masterful work of speed and precision, applying light-sensitive coatings to photographic paper.

Kodak Ltd. is the oldest subsidiary of the U.S.-based Eastman Kodak Company and began production in England in 1891, three years after George Eastman introduced the first hand-held camera to the world for $25.

“Track Five is the heart of the site,” says Paul Byatt. As a conveyance engineer, he has worked with the machine for 12 years and is now the dry-end manager – the person responsible for the paper’s entire path through the machine.

Paper passes continuously through Track Five’s two production lines, which twist and turn through five floors of the building. The huge rolls of paper waiting to be loaded onto the machine are 5 feet wide and 13,120 feet (2.5 miles) long. The web path itself is approximately 5,000 feet long and, through the vari­ous production processes, passes over 2,000 rollers. The processes include coating, chilling and drying the product. As Byatt talks, it is clear he has a fondness for his machine, but, he says, loving care is not enough.

“The unwinder section has been the least reliable part of the machine because of age,” Byatt explains. We’re now walking through a labyrinth of low corridors to where Track Five is housed. “It’s 35 years old and running at 25 percent above its design speed to meet volume demands. There were reliability issues and brea­k­downs that were costing Kodak money. In 2000 we had 290 stops. It was a struggle, and we were getting close to not delivering.”

It was at this point that Chris Moon and Gerald Rolfe of SKF Reliability Systems UK, stepped into the picture. In November 2001 they carried out an assess­ment. “At first they were trying to sell us loads of equipment and get us to buy into a fi­nancial package very quickly,” Byatt recalls, stepping aside to make way for a truck transporting several man-sized rolls of paper. “I switched off. I thought it was just a sales pitch and almost pushed them away.”

Building a good relationship
In hindsight it was fortunate that he didn’t. Over the ensuing weeks, Moon and Rolfe returned several times to visit with Byatt. “I said I would like to work with them bit by bit and see how it goes,” Byatt recalls. “This has meant we’ve built a good relationship. We have a working partnership rather than being just salesman and customer.”

In April 2002, Moon and Rolfe de­­­­li­ve­red their findings and recommendations. Byatt, still skeptical, was pleasantly surprised. “I expected them to come up with a conclusion for us to work on that would involve us buying equipment from them. You know, the usual sales pitch, ‘Buy this and we’ll sort it out for you.’ But they didn’t. They identified 13 key points and 11 were in-house,” he recalls.

The SKF duo advised Kodak to look into those machine parts that were costing the most in breakdown time.

“We thought the splicing section had been causing us the most trouble because it broke down more often,” Paul says. “But those stops didn’t cost as much as the pressure rollers, which broke down less but took 500 minutes to repair each time.”

Predictive maintenance
SKF’s audit also took in roller-bearing mounting, storage and general maintenance. It wasn’t easy: Because the paper becomes light sensitive during the production process, about two-thirds of the machine’s operations are carried out in darkness. Every two weeks the lights are switched on for engineering checks, but in the meantime breakdowns can be costly.

“There are 4,000 bearings in the 2,000 rollers, and if one of these fails and seizes up, we’re scratching the product,” Byatt says, standing in a lighted room where a row of rollers are steadily feeding raw paper into the dark where it is taken up by the winders. “Now we practice predictive, not reactive maintenance,” Byatt says. “We don’t wait for things to breakdown, and SKF has contributed to this change.” The predictive factor has been strengthened by investing in technology such as SKF’s Marlin condition detector, machine inspection software and training.

Sam Smith, a 21-year-old engineering student is on a work placement with Kodak from Loughborough University in Leicestershire, England. He attended a two-day workshop on lubrication at SKF’s Business and Technology Park in Utrecht, the Netherlands.

“Lubricating bearings is a big issue for us, and overgreasing is as big a problem as undergreasing. Now I know how to handle bearing lubrication,” he says.

In the maintenance workshop, craftsmen Ron James and Ray Monk clean and repair Track Five’s rollers. James picks up a dead-blow hammer lying on a bench.

“This,” he says, waving it in the air, “is one of the tools that have been improved by SKF. We used to use any old hammer, but this one doesn’t bounce back.

Another change is that troublesome bearings are sent to SKF for analysis instead of ending up “in the bin,” he says.

Byatt’s insistence on a step-by-step approach with the troubleshooting duo has worked for everyone concerned.

The partnership has reduced the cost of unplanned downtime by $2.7 million for Kodak. Meanwhile, SKF has secured potentially $180,000 worth of project work for 2004.

Examples of areas identified for improvement: