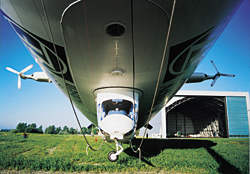 It had been more than half a century since a new Zeppelin flew over Friedrichshafen, Germany. So it was an important day when it finally happened again.They turned out in the tens of thousands, watching patiently behind barriers at the Friedrichshafen, Germany, fairgrounds, waiting while tests were done and decisions were made. Then finally, towards evening on Sept. 18, 1997, the new Zeppelin airship rose gently into the air to make its short maiden voyage across town to a brand-new hangar. The crowd cheered and waved as pilot Scott Danneker paraded the airship above the town before bringing it to dock in its new home. After an absence of almost 60 years, the people of Friedrichshafen could once more describe their town as the home of the Zeppelin.
From the point of view of the staff of Zeppelin Luftschifftechnik (Zeppelin Airship Technology), it was a scary business. They had built the airship on the fairgrounds, since it was the only place they could find in the area that was big enough. Whenever a trade fair took place, they would hoist the ship up to the roof so it was out of the way. But this time an extra-big show was scheduled, so the new Zeppelin NT (which stands for neue Technologie or “new technology”) was forced to vacate the location, embarking on its maiden flight under time pressure and before the eyes of the world. “We would never have chosen these circumstances,” says Dietmar Blasius, who is in charge of sales promotion. “You can’t imagine the stress.”

A luxurious tradition
There was a long history behind that maiden flight. Count Ferdinand von Zeppelin’s first rigid airship took off from Friedrichshafen in 1900, and the company soon became one of the leading manufacturers of airships. The high point of this early age of airships came in 1928 when the “Graf Zeppelin” began making around-the-world trips and regularly scheduled voyages to Rio de Janeiro. Nine years later, in 1937, came the luxurious 800-foot-long sister ships, the “Graf Zeppelin II” and the “Hindenburg” (named after the German general and president), which began regular flights to Lakehurst, a town near New York City. At the time, flying by airship was much more like traveling by ocean liner than by airplane. You can experience the spaciousness of the lounge and the cabins today by visiting the Zeppelin Museum in Friedrichshafen, where there is a reconstruction of part of the Hindenburg.
But this age of luxury air travel came to an abrupt end when the Hindenburg was consumed in a horrifying 60-second blaze while coming in to land in stormy conditions at Lakehurst in May 1937. New research suggests that static electricity built up between the paint on the outside of the cotton cover and the metal inner structure, igniting the hydrogen gas that kept the ship afloat. Although most of the passengers and crew miraculously survived, the accident, which was witnessed by a newsreel commentator and many photographers, put people off flying in airships, apparently for good. There were no more passenger flights, and the last Zeppelins were scrapped in 1940.
Well, not quite. In 1993, Zeppelin Luftschifftechnik was founded, a wholly owned subsidiary of the original Luftschiffbau Zeppelin and ZF Friedrichshafen, which was founded in 1915 by Count Zeppelin to make the gearboxes for the original Zeppelins. The new company’s objective: to build the Zeppelin NT airship.
The new Zeppelin company takes advantage of the reputation of its predecessor, but it is also careful to distance itself from the problems that led to the famous Hindenburg disaster, which is, after all, the only thing many people know about Zeppelins. “The way the journalists go on about it gets on my nerves,” says Blasius. “That simply couldn’t happen to our ship. Unlike the hydrogen in the Hindenburg, our ship is filled with helium, which would actually put out any fire.”

Different framework
For 40 years, nobody saw a need for a rigid airship (“rigid” refers to the rigid internal framework of the ship). A few non-rigid ships have been built for advertising purposes, but they are hard to maneuver, and because they don’t have any framework, the engine is attached to the passenger cabin, which leads to hefty vibrations and lots of noise. But like its predecessors, the Zeppelin NT has an internal framework, to which the engines and the propellers are attached, guaranteeing a smooth, quiet ride.
Blasius says the idea for the new airship came originally from the assumption that the tourism industry might like something more comfortable than the non-rigid airships, but feasibility studies showed that there were plenty of uses for an airship beyond tourism. Wherever high maneuverability is required, or where an aircraft has to be in the air for long periods, or where it’s important that an aircraft does not disturb the air too much, or where it has to be quiet or steady, the Zeppelin would be unbeatable. So, for example, the new airship could be used as a platform for television cameras to shoot sports events, as a control center for earthquake relief or for fisheries protection, scientific measurement of the atmosphere or cartography. Although the first one is still adding up its flying hours for airworthiness certification, there are already five orders for the first production models.
But the new Zeppelin is not just a smaller (only 250 feet), helium-filled version of the old one. The frames of the old Zeppelins entirely filled the skin. In contrast, the new Zeppelin has a long triangular frame made of aluminum and composite carbon-fiber beams that provides a certain degree of rigidity but is more efficient to build than the original version. More economical, too. Blasius points out that the original Hindenburg had 5.5 million rivets. The price per rivet today is about four German marks, making the rivets alone worth 22 million marks ($13 million). If you let the helium out of a Zeppelin NT, it will collapse onto its triangular frame, which will still give some support. Hence the term “semi-rigid,” which was invented for this construction method.

Drive system improvements
Another significant innovation is the drive system. There are three 200-horsepower Textron Lycoming piston engines, driving reversible, variable-pitch propellers. ZF Luftfahrttechnik, a subsidiary of ZF Friedrichshafen, which makes the gearbox, has plenty of experience in making gearboxes for helicopters. But those are driven by turbines, and the Zeppelin is powered by piston engines, which leads to severe oscillation in the start-up phase. Egon Metz, aircraft transmission development manager for ZF, says that there were a lot of specifications that weren’t clear at the start and had to be determined as the development went on. Among these undefined parameters were the oscillations; as development proceeded it became clear that to provide the best power transfer, both the convex and concave tooth-flanks of the main spiral bevel gear had to be optimized.
One important innovation is that the propellers can be pivoted into a vertical position, allowing vertical take-off and landing. The rear engine also has an odd-looking sideways propeller, which also increases controllability by swinging the stern around. This allows the Zeppelin to make do with a three-person ground crew, since it can largely control itself as it comes into dock. The old Zeppelins (and the modern non-rigid airships) need large teams of people to “catch” them and pull them into position for docking.
In the carbon-fiber cabin, the 12 passengers can look over the shoulders of the pilots as they operate the fly-by-wire system. Danneker, an American test pilot, who’s been flying airships for 13 years and has been with Zeppelin for three of them, says that he likes the relaxed pace. “You fly with the windows open, low and slow, and you have an intimacy with the surroundings.” But you have to be a certain type to fly airships. “Some pilots can’t make it; they miss the speed,” says Danneker. But he describes himself now as an airship “lifer.” He certainly prefers flying the Zeppelin to the non-rigids he used to fly. Because of the innovative technology, he says, “you can do things with this that you can’t do with anything else.”
The Zeppelin NT, as the initials imply, is indeed new technology. But as it glides through the air at its stately cruising speed of 70 miles per hour, it seems to hark back to a different age – one where style mattered more than speed and getting there seemed less important than the pleasure of the journey.