» The benefits of remanufacturing rolling bearings 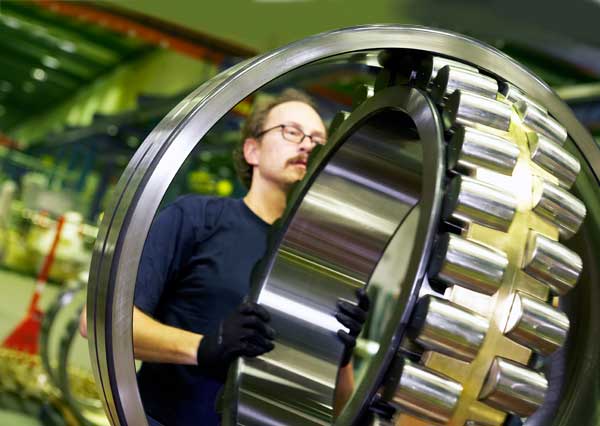 For decades it has been a practice in commercial/industrial and aircraft applications that rolling bearings removed at maintenance and overhaul are reworked and returned to service. The effect of rework of components and elements can be evaluated. Bearing rework gives many cost benefits. Savings can be 50% to 80% depending on bearing condition, size, etc. Furthermore, reworking has a strong sustainability impact: 220 lbs of reworked bearings will save approximately 770 lbs of CO2 emission. Algebraic relationship can be established to determine the L10 life of bearing raceways subject to partial removal of stressed volume as a function of the depth z at refurbishment and restoration. Depending on the extent of rework, the life factor LF for a reworked bearing may range from 0.87 to 0.99 of the life of a new bearing.

Bearings are core components of plant assets, and they take a lot of punishment. Usually, bearings are either replaced during planned maintenance when nearing the end of their operational life or after unplanned breakdowns. Depending on the bearing type, replacement can be expensive and may involve long lead times. In addition, scrapping of “end of life” bearings may have a negative impact on a company’s sustainability profile – an aspect that is becoming increasingly important to investors and customers. How can one increase the service life of bearings in order to decrease downtime, reduce costs and reduce scrap? Remanufacturing is the key (figs. 1 and 2).
Cost-benefit analysis shows that potential cost savings of between 50% to 80% of the cost of a new bearing can be achieved by remanufacturing bearings – depending on bearing size, complexity, bearing condition, price, etc. Furthermore, remanufacturing of used bearings can reduce CO2 emissions. Remanufacturing 220 lbs of used bearings leads to a reduction of about 770 lbs of CO2 emissions.
In the aircraft industry, amongst others, it is common practice to remove rolling bearings at maintenance or overhaul for reworking. The bearings are subsequently returned to service [1 to 3].
A need for an international standard (ISO) is seen to ensure that there are defined procedures and terms of reference. Currently, only a national Austrian standard [4] has been agreed; this was published in 2011.
For remanufacturing of used rolling bearings, five classes have been established.
It is possible to describe the bearing life for remanufactured bearings considering changed geometry and shear stress τ (τ0, τu) due to stressed volume removal and to the effect of replacing the rolling ele­­­­m­ents with a new set.

Bearing life and reliability
Generally a rolling bearing cannot be used and rotate forever, unless operating conditions are ideal and the fatigue load limit is not reached; sooner or later material fatigue does occur [5].

Subsurface-initiated fatigue
Bearing life is considered as the period until the first sign of fatigue appears. The bearing life is a function of the number of revolutions performed by the bearing and the magnitude of load [6 to 9]. Fatigue is the result of shear stress cyclically appearing immediately below the load carrying surface of the ring(s) and rolling elements (fig. 3 and equation 1).

Other failure modes
Many other failure modes are known, resulting from use in imperfect conditions or installations. ISO 15243 [5] gives a good overview of these failure modes, although, given the latest experience, there is a need for a revision of this ISO standard on rolling bearing damage and failures.
In the mid-1950s Arvid Palm-gren, a leading bearing theorist, suggested the concept of bearing repair instead of active bearing replacement when he said, “The mean service life is much longer than the calculated life, and those bearings that have a shorter life actually require only repairs by the replacement of the part that is damaged first.”
This is not to say that a bearing cannot be used after damage (fig. 4). The presence of damage is identified by increasing noise and vibration levels. Over the decades, repair techniques have been applied to bearings that enabled the restoration of the expected life and reliability of the bearing.

Consequences
Analysis and experience of modern remanufacturing show that refurbished bearings can obtain nearly the life and reliability of new bearings. Considering the extent of rework, results of stress measurement test methods such as XRD [10] (fig. 5) and nondestructive testing methods (NDT) such as the Barkhausen method [11], the micromagnetic testing method (3M), nonelastic wave spectroscopy (NEWS) [12], resonant ultrasound spectroscopy of surface acoustic waves (RUSSAW) testing and phased array ultrasonic analysis gives the representative life factor, LF . The life factor may range from 0.87 to 0.99 of the life of a new bearing (fig. 6).

Classification of bearing rework
Terms and definitions of reworked used rolling bearings are explained as follows.
According to the rate of prior use and the wear status, bearing rework can be divided into five classes (fig. 7).
While the operations in the particular classes are numbered, the actual sequence of the work is not directly related to these numbers. Special agreements between the maintenance company and the operator must be respected.
Preserving actions between the individual operations may be required. For example, when a bearing raceway is damaged by subsurface-initiated fatigue – see [5] – it is not considered for Class III rework. However, when there is superficial damage (surface initiated fatigue) to the bearing raceways caused by dirt or debris, raceways can often be restored by honing or grinding.

Class 0 – Inspection
Class 0 includes inspecting used bearings (or bearings that were stored for a long time) and comparing them with drawing/specification requirements. This process involves: Class II – Refurbishment (reconditioning)
Refurbishment of bearings encompasses all of the operations of inspection (Class 0) and reclassification (Class I) plus one or more of the following: Global access
SKF has a global network of state-of-the-art service centers, giving customers access to SKF’s world-class bearing remanufacturing capabilities. SKF is one of the leading global suppliers of bearings, and SKF Remanufacturing Services are backed by more than 100 years of knowledge and experience with rotating machinery.
SKF uses the same high-quality materials, methods and machinery to rework bearings that are used in the original manufacture, giving customers the peace of mind that their bearings and related equipment (housings, for example) are being treated with the same level of quality, work processes and knowledge, regardless of where in the world a customer is located. Potential benefits of using SKF Remanufacturing Services include:

The full benefits of adopting the remanufacturing program can be achieved when customers also use SKF predictive maintenance expertise.