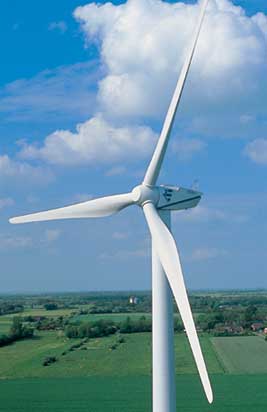 Indeed it is, and the Brunsbüttel turbine is really only the first of a series of dry runs for the “wet” version of the 5M that will be “out there at sea.” The first will probably be in 2006, 15 miles from the Scottish coast in 145 feet of water as part of the Talisman DOWNVInD project, supported by the European Union.

One of the main problemswith the deep sea is that it’s so far away. REpower needs Brunsbüttel and a few more land-based sites where it can get at them easily, and run the turbines while optimizing them. But it’s not easy to get approval for wind turbines on land, especially not for five megawatt giants – each powerful enough to supply 4,500 households with electricity. REpower hopes that the jobs it provides throughout northern Germany will help convince local and state governments to look favorably on test sites.

The industry has learntfrom the errors of the first companies to go offshore, which tried to put up sea-proofed versions of their land-based turbines. Those first offshore turbines were also smaller than the current generation. However, the high costs of building foundations in 130 feets of water and connecting to the power grid means that the new generation of giant turbines is the only way of amortizing that high capital outlay.

New dimensions mean new materials. The first rotors blades were made of steel, and the current industry standard is glass-fiber-reinforced plastic, but REpower has had to reinforce the glass fiber with carbon fiber to give the 5M’s 414-foot-diameter three-blade rotors the extra length without the corresponding weight.

“The main issue is to provide a high level of operational availability,” says Skiba. “You can’t pop by on your way to the shops to change a fuse, so these turbines have to work reliably for months on end.” The 5M has been conceived from the start for its inhospitable environment. Protection against corrosion caused by almost permanent salty wind is a main issue, but other less obvious aspects have also been taken into account. There’s partial redundancy in the design of many components. For example, as Skiba points out, “Whereas the rotor shaft on most wind turbines is supported by only one bearing – the other being in the gearbox – the shaft in the 5M has two: one locating and one non-locating.” This means that the gearbox bearings only have to carry torque loads.

The condition of componentsis continually monitored electronically, so that action can be taken on regular maintenance trips to put right faults that may be about to emerge. When the maintenance engineers do have to call, there’s a helicopter landing pad on the nacelle, and inside the nacelle, there’s a six-ton crane that will enable the removal and replacement of
95 percent of the parts. Only the largest will require a jack-up platform with its own crane.

REpower has pumped $16 million– about 15 percent of it from public funds – into the 5M, and it has set itself the challenge of making sure that its first turbines to be installed out at sea will provide the kind of reliability and return on investment the industry requires. The company has done its homework, but spokeswoman Bettina Linden says it can’t do it on its own. “We all have to pull together,” she says. “There are political decisions to be made about the infrastructure, about the cables under the sea, about how wind power can be integrated into the grid, and there are problems to be solved related to operation and service. But it’s clear that increasing wind power is the only way to meet global-warming targets.”

SKF supplies the bearings for the 5M’s huge rotor, which, with a weight of more than 100 tons, puts enormous loads on the rotor shaft. A CARB® toroidal roller bearing is fitted in the non-locating position – the largest ever produced, with an inside diameter of 1,500 mm (4.9 ft) and weighing 2,700 kg (5,950 lbs) – while a spherical roller bearing is fitted in the locating position. The extraordinary size of the rotor unit meant that SKF had to design a new induction heater to heat the bearings and the 8,000 kg (17,640 lbs) housings prior to assembly. SKF also designed and supplied special split nuts (also the largest ones ever) that facilitate assembly and disassembly. And SKF provides the WindCon online remote monitoring system for the coming units to keep an eye on a number of important parameters. (See article in Evolution 1.2005)