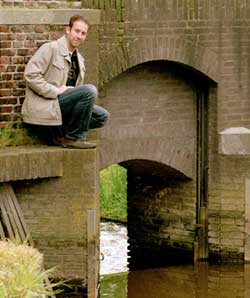 The Van Aarsen company began half a century ago, manufacturing a traditional Dutch watermill. Today, as well as being a world leader in feed mill technology, the company is taking the lead in the business of machinery for recycling of rubber tires.

The Van Aarsen company began half a century ago, manufacturing a traditional Dutch watermill. Today, as well as being a world leader in feed mill technology, the company is taking the lead in the business of machinery for recycling of rubber tires.

Van Aarsen International BVis situated in the small rural village of Panheel in the southeastern corner of the Netherlands. A few steps away from the company headquarters stands an old red-brick watermill, a reminder of the company’s origin half a century ago. The locks to the watermill are closed now and the ducks can swim freely to the artificial lake backing the company’s modern factory buildings, where the company sets about its current business — the design and construction of turnkey feed mills. Van Aarsen sells the whole process of storage, dosing, weighing, grinding, mixing and pelleting.

Van Aarsen is also in the business of recycling rubber tires, and although it might seem a huge step from making feed mills for meal and pellets for animals to machinery for shredding rubber tires, it isn’t , says Harold Schroijen, head of sales support at Van Aarsen International BV. “The difference is quite small,” he says. “In principle, the process is the same. That’s why we wanted to get involved in the rubber industry. We already have the know-how. And we already think in whole processes.”

Today, interest is growing. Van Aarsen’s customers are entrepreneurs who want to make recycling of tires a profitable business, people in the business of tire collection, waste-collection companies, and people who want to use the end product.

“Most European countries today have a ban on landfill,” Schroijen says. “And with new EU directives for used tires [expected] in the future, there is a need to find an alternative use. Today most used tires are still used as fuel in the cement industry.”

The shredding machines are massive, made to process five tons of rubber per hour, the equivalent of about 900 car tires or 90 truck tires. “Tires are made not to be destroyed, so this is a very tough process,” Emons says.

Huge rotor blades shred not only the rubber and textile, but also the steel-wire bead, which is especially thick in truck tires. The resulting rubber shreds are 10 to 15 centimeters (4 to 6 inches) in length.

The shreds are thensent through the main grinder, where the textile material and at least 95 percent of the steel components are separated from the rubber, which is ground to pieces about 22 millimeters (0.87 inches)

in size. The mixture is then put through a screening process where specially designed magnets remove the steel particles and a filtering system separates the textile parts. After the screening, the rubber is separated into various product streams.

The biggest application for recycled rubber is for artificial turf on football pitches.

“To get the playability and characteristics of a natural grass field you add five to 10 kilograms [11 to 22 pounds] of rubber shreds per square meter,” Emons says. “Scandinavia is a big market for this.”

In addition, shreds are glued together with polyurethane to make rubber tiles used on playgrounds, athletic tracks and sports fields.

“Other applications include vibration damping in factories, noise reduction and insulation,” says Emons. “And nearly every wheel on a garbage bin is made from recycled car tires that have been re-vulcanized.”

The rubber-recycling process hasbeen only a small part of Van Aarsen’s business, but the company acquired Konings Rubber Technology, based in the Netherlands, early in 2004 and hopes to see growth in this area.

“Through the purchase we acquired machinery and drawings,” says Schroijen. “From that we have used the best parts and are having our engineers use their know-how.”

Some 40 of the 125 Van Aarsen employees are engineers. “That’s a lot,” Schroijen says, “but it has to be as we are not only selling machines, we are selling a whole process.”

SKF application engineering in the Netherlands was intensively involved from early on in the development of the tire-recycling equipment at Van Aarsen. The heavy loads and dynamic behavior of the process demanded a stable design to provide a long service life. For both shredder and grinder, there are tight tolerances on axial clearance of the bearing arrangement and the misalignment of the main shaft.

SKF application engineers performed SKF bearing beacon calculations to determine the most suitable bearing selection. The findings were used to further optimize the machine designs, and tests proved the quality of the equipment.

This technical support is only a part of the wider cooperation between SKF and Van Aarsen.

Some years ago, the two parties agreed to work together more closely. This has meant that SKF proactively supports the development of the products and business of Van Aarsen. In return SKF is the sole supplier for all Van Aarsen’s bearing products.