» A war against wear 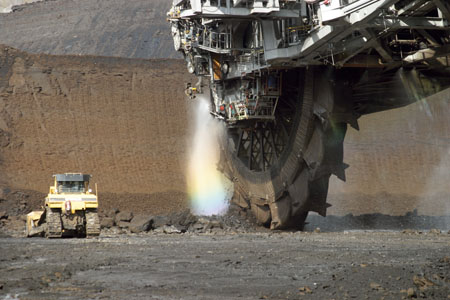 A war against wear

The huge excavators and conveyors in RWE Power’s opencast lignite mines are not just enormous, they’re clever too. And the cleverer they are, the more efficient the mine operation becomes.

The huge excavators and conveyors in RWE Power’s opencast lignite mines are not just enormous, they’re clever too. And the cleverer they are, the more efficient the mine operation becomes.

If you want to visit the little town of Morschenich, close to Cologne in western Germany, don’t leave it too long. It will disappear in about 20 years. And if you should plan your visit for about 15 years from now, you’ll need to buy yourself a new map. The A4 motorway that runs nearby will have already disappeared by then.

This apparently catastrophic scenario is being carefully planned. The town and the road lie in the Hambach lignite mine concession, and both will yield before the huge excavators, which are already chomping their way across the countryside. But they won’t exactly disappear. The company that runs the mine, RWE Power, will rebuild the town nearby and move the road south, creating a landscape with lakes, farms and forests.

The Rhineland’s lignite mining company – the former Rheinbraun subsidiary of the RWE utility concern, now part of RWE’s power generation division –RWE Power AG has plenty of experience in this pro-cess of mining and reclamation. As long as Germany wants a reliable, domestic source of power at a price that requires no subsidy, RWE’s excavators will continue their onward march. RWE Power’s three opencast lignite mines in the Rhineland region – Hambach, Inden and Garzweiler – produce 100 million tonnes of lignite a year for RWE’s four power stations. RWE Power’s coal trains run one after another from the loading ramps at the mines along 330 kilometres of RWE tracks to the power stations where they deposit their loads. They have between them a capacity of 10,000 megawatts and supply a quarter of all the electricity used in Germany’s most populous state, North-Rhine Westphalia. And RWE has concessions to continue digging for the next 40 years.

This is engineering on a large scale. In Hambach, the current open quarry measures about 7 kilometres by 6. The coal is found at a depth of 300 metres and the seam is about 65 metres thick. One monstrous bucket wheel excavator shovels 40 million tonnes of coal a year onto conveyors, which take it to the railhead. Ahead of the coal digger, a number of excavators stand on terraces, clearing away the earth and sand covering the coal and shovelling this overburden onto conveyors, which bring it to the area behind the open coal seam. Their gigantic spreaders fill the part of the quarry that has already been exploited. As soon as possible the land is recultivated, to help stabilize it and to limit the amount of dust.

But, says Bruno van den Heuvel, senior manager of the testing department at RWE Power’s Mines Engineering Centre in Habbelrath near Cologne, you shouldn’t think that it’s all just a matter of brute force. “Our machines get bigger, and they have huge power,” he says, “but they also have intelligence.” The past 20 years have seen the introduction of sensors, automation, electronic control and modern drive technology in the monster machines, which has led to increased efficiency and cost reductions.

One of van den Heuvel’s main challenges is the effect of wear on the equipment: “This business is a war against wear,” he says. For example, at the sharp end of the operation are the buckets on the excavators, which dig into sand or coal and lift them onto the conveyors. On the buckets’ leading edge is a tooth that bites into the surface. Until the mid 1980s, buckets had to be replaced after digging out 250,000 cubic metres of material. Then new welding techniques meant that the teeth could be covered with a chrome-carbon coating. In the mid 1990s, further developments enabled the use of tungsten carbide, which increased bucket life to 650,000 cubic metres. “No one knew how to weld such large areas and thick layers of tungsten carbide,” says van den Heuvel, “but we learnt to use plasma transferred arc welding, which allows very precise welding parameters.” The mines once needed to renew teeth and edges of the buckets 2,400 times a year; that figure is now down to 800.

Van den Heuvel’s department, with 45 staff members, has the task of improving efficiency and saving money for RWE Power. They saved 6 percent in maintenance costs simply by changing the composition of the rubber on the conveyor belts. Through condition monitoring and non-destructive testing, they can make sure that maintenance is carried out when needed – not before, and not after. They specialize too in R&D for the mines’ 500 kilometres of 2.8-metre-wide conveyor belts, which make up the backbone and the limbs of the system, as well as for the borehole technology with which they manage groundwater levels.

Apart from the boreholes, almost everything van den Heuvel’s team has to do with involves moving parts, and, if it moves, it probably involves a bearing, so bearings are a central challenge. With techniques such as vibration and temperature monitoring, the team tries to identify problems before they become serious. Mining staff drive around the mines regularly, looking for irregular conditions at the conveyors and listening for unexpected noises in bearings. Units are removed for testing, but they don’t have to be dismantled, since, explains van den Heuvel, the engineers identify a damaged bearing by examining the bearing frequencies in the condition monitoring reports.

RWE Power has cooperated closely on several projects with SKF to improve performance, but, says van den Heuvel, “Most bearing failures are not due to the bearing, but to something wrong in its environment.” So, for example, SKF and RWE Power have worked on improving the mines’ 600,000 conveyor belt idlers. Research led to improvements in the seals and inner construction ofthe idler, but the bearings remained the same. Among the advantages of the changes has been a reduction in the noise of the idlers, and noise is one of the main environmental issues that RWE Power is always trying to improve. In a similar project, SKF is helping RWE Power increase efficiency using the SKF Magic Roller to monitor loads (see box “Inside the bearing”).

People might be reluctant to live next door to one of RWE Power’s opencast mines, but everyone wants the reliable energy they produce. As the excavators slowly make their way across the landscape, the operators are trying to make sure that they make as few people unhappy as possible. And central to that aim, as well as to the aim of keeping this unsubsidized energy source competitive, is the maintenance and improvement of the machinery.

The SKF Magic Roller is a smart way of finding out what happens inside a bearing. And that’s useful for engineers who want to work out what might be the best environment for a bearing. At RWE Power, SKF installed its Magic Rollers in the two bearings carrying the drum driving a conveyor belt. SKF Magic Roller, equipped with a sensor to monitor loads, replaces a standard roller and transmits the measurements by a radio to a nearby notebook computer. SKF evaluates the readings and reports to RWE Power.

SKF also made Finite Element calculations of the bearings and their housings to see whether modifications would improve performance. SKF Magic Roller readings helped to define the parameters of the computer model and increase the accuracy of the model’s predictions. One of the objectives, says Bruno van den Heuvel,senior manager of the testing department at RWE Power’s Mines Engineering Centre in Habbelrath, Germany, is to see if the bearing housings need to be quite so massive. Depending on the results, it may be possible to save money on construction.

Van den Heuvel says the objective of these tests, as with much of his team’s work, is to find out how good the systems are and to improve them where possible. And he praises SKF’s contribution. “SKF is interested in helping us progress technically,” he says, “even if it means that we’ll end up buying fewer bearings or using less costly variants”.