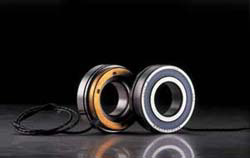 Integrated sensor makes the difference
Over the past 15 years, many industrial drive systems have been converted from DC motors to electronically controlled AC motors. This is mainly because of the advantage AC motors have in terms of maintenance, price and flexibility.
Leroy–Somer was recently asked by a manufacturer of DC–powered materials handling equipment to help them explore the possibility of converting their applications to AC. To that end, Leroy–Somer designed and produced a prototype motor, which is now at a stage where serial production can begin.
AC motors require a sensor to provide feedback about speed. After comparing different solutions, the prototypes suggested by Leroy–Somer were fitted with an SKF sensorised bearing, a bearing where the sensor has been integrated to form a single unit. Thus, the sensor is automatically integrated into the motor as well. The advantages with this solution are that it occupies no extra space, it is well protected inside the motor, it provides a reliable steady pulse signal and it is easy to install.

For French company Leroy–Somer, movement means electric motors. It also means pushing the technological limits further to make motors more intelligent.Leroy–Somer, headquartered in Angoul ême, France, manufactures electromagnetic and electronic drive systems, which include AC motors, synchronous motors and DC motors, gears and electronic control systems. There are 36 million Leroy–Somer drive systems in use in the world. Altogether, the company’s 34 plants in several countries produce 12,000 motors per day. It also produces a large range of low– and high–tension alternators and is one of the world leaders in the field.
Leroy–Somer’s drive systems are often used in industrial processes, but they are also found in applications closer to everyday life, such as elevators, pumps and marine and leisure boats. “Many of our products help people have a better life,” says Jean–Michel Lerouge, the communication manager at Leroy–Somer. Leroy–Somer renews 50 percent of its product range every five years, and makes it a priority to foresee the needs of its customers and to adapt to changing trends. In particular, Leroy–Somer has focused on products that require less maintenance, lower
energy consumption and minimal environmental impact. During the past 10 years, Leroy–Somer has been involved in the development of electric vehicles for the PSA Group (Peugeot and Citro ën). This includes car models such as the Peugeot 106, the Citro ën Saxo, and Peugeot Partner and Citro ën Berlingo station wagons. So far this has resulted in the delivery of 5,000 electric motors. Recently, Leroy–Somer participated in the development of a second–generation electric version of Peugeot 106. The car can now reach 110 kilometres per hour, compared with 80 kph for the previous model. The action range has been extended to 210 kilometres, compared with the 100 kilometres previously achieved.

Intelligent future
Leroy–Somer has its own organisation for research and development. Operating independently, each major production unit has a team of researchers. Roughly one employee in 10 works in R&D. The company is also in active partnership with its customers as well as universities and private laboratories.
Since the beginning of the 1980s, in pace with the development of the electronics industry, Leroy–Somer has been making motors specially designed to work with electronic speed variators (the LSMV series). The company also makes motors in which the variator is integrated (VARMECA). One of the advantages with speed variation is that it creates an opportunity to reduce energy consumption. For example, electronically controlled electric motors for pumps in water supply systems can adapt to varying water needs over time. The electric power is continuously adapted to the water demand, which optimises the energy consumption.
The progress made in the field of electronics will continue to push forward the development of new and better drive systems. In the future, drive systems will be expected to provide control of a movement. They will act as “smart” components, controlling part of the production process – for example, regulating traction, synchronising movements, etc. In addition, machines will tend to integrate several small motors, each one driving a specific function, instead of having one big motor that provides all functions. Smaller motors require less space and offer increased flexibility, easier maintenance and a lower price.
The story of Leroy–Somer is the story of a small French workshop that became an industrial giant. It is also the story of a man who dedicated his life to one ambition – creating movement from electric energy.
In 1919, Marcellin Leroy, a young craftsman with a vision of what electric motors would mean to our living and working conditions, opened a workshop to manufacture winding machines. Leroy wanted to manufacture the components for his machines in–house, so along with the workshop, he built a foundry. Over the following decades the company grew and in 1947, Leroy started producing alternators. Shortly afterwards, Leroy launched the company’s first industrial motor.

Growing abroad
From 1950, a company priority was to organise and rationalise production to meet the demands of increasing industrialisation. The company moved to mass production, and each product line was given its own workshop. At the same time, the company started exporting, setting up a network of subsidiaries in Europe.
Leroy–Somer got its name in 1960 when Leroy merged with Lyon–based Somer, also a manufacturer of electric motors. In the 1970s, the company entered the global arena, and moved into electronics. Emerson Electric, a US group, bought all of the company’s share capital in 1990, which allowed Leroy–Somer to reach the size necessary for a larger penetration of global markets.
Today Leroy–Somer is present in 110 countries and has 6,200 employees. Exports represent 60 percent of the company’s turnover, which in 1998 amounted to 3.9 billion French francs (USD 618 million).