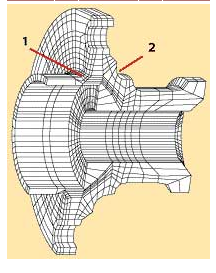 The Finite Element Method (FEM) is a well-established engineering technique in many areas of product design and design verification. Within SKF, it has been used successfully to reduce modeling time and evaluate
bearing performance.Finite Element Method (FEM) applications include stress and fatigue verification on automotive hub unit designs, weight reduction of axleboxes and analysis of gearbox housing flexibility. In most cases the technique is applied to flex and stressing within the elastic limit of the particular materials and structures modelled.

Two general applications of FEM within bearing design are for hub units and housing flexibility.

In 1981, SKF began to apply FEM to optimise safety and weight aspects of automotive hub units. The geometrical details at the root of the hub flange were found to have a substantial influence on the stress distributions in various critical areas, such as the spigot and sealing counterface radii. FEM provides the opportunity to study a number of design alternatives.

To increase the speed of such analyses and to meet the shorter development cycles required in the automotive industry (fig. 1), analysts at SKF Engineering and Research Centre (ERC) in the Netherlands developed a semi-automatic procedure for finite element design and fatigue analyses of hub units.

A typical example is shown in figure 2. The stress results on both the spigot and the sealing counterface were found to be non-conservative under the following cornering conditions:

The boundary conditions were such that the screw holes were locked in all degrees of freedom and a small vicinity of 2 mm around the hole on the out-board side was locked in the axial direction.

Consequently, within a period of three days the design was modified and improved by using the SKF software.

The SKF longstanding in-house bearing shaft/gear system calculation program is able to consider housing flexibility factors providing that an FE model or housing stiffness matrix is available. By applying the stiffness information to the program, SKF is able to help customers overcome potential design faults at an early stage.

To provide customers with this early input, SKF itself needed a calculation tool which would be capable of providing the information on housing flexibility to evaluate bearing performance and vice versa at a stage when normally there are no FE models available or when conventional FE models would be too expensive or time-consuming to create.

While the bearing shaft/gear system program allows SKF application engineers to calculate the influence of housing flexibility on bearing life, it is limited when it comes to providing a fine description of local flexibility at each rolling element position. This requires prior intensive FE modelling activities and the total time needed for data preparation can be up to three man months for a geometrically complicated housing. When customers are seeking a quick response, another kind of analysis method is required.

The solution developed at ERC is a Finite Element procedure that understands parametric inputs of a flexible housing, and from this creates the corresponding housing stiffness substructured matrix for the subsequent shaft bearing calculations, reducing substantially the amount of human intervention required.

Wider Applications
FEM, however, through its ability to analyse structures with complicated geometries has wider applications in many ball/roller bearing applications such as car and truck gearboxes, rolling mills, oil field equipment, papermaking machines, cranes, compressors and rotary tubes.

In these applications, material properties, stiffness values and the design of cross sections of shafts and housings all influence bearing performance. SKF customers need to know the implications of these factors in order to optimise their housing designs in terms of speed, reliability and minimum weight.

Benefits of the semi-automatic procedures

The ERC procedures have demonstrated rapid feedback on the performance of two applications (hub unit and bearing housing) to design engineers which meets the expectations of short cycle times for the automotive industry.

Using this semi-automatic method the modelling time (from the input of the conceptual geometry to the creation of the ready-to-be-executed FE model) is greatly reduced from months to a matter of hours.

Further, modification to an existing design concept that requires changes to only a few parameters can be made in five to ten minutes as all unaltered parameters can be recalled automatically from the database. The complete analysis of several design alternatives can now be achieved in a period of one to two days.

The semi-automatic procedure for hub units allows designers and engineers to identify parameters which are critical to deformation, stresses and fatigue.

The typical size of an FE hub model has 42,000 degrees of freedom and 11,000 elements. This program has been used on more than 25 different types of hub units destined for a range of car models and manufacturers.

Another benefit is the special interface between the housing flexibility program and the calculation program which provides a faster and more reliable interface. The flexibility program can also automatically update the stiffness matrix should the number of rolling elements alter.

Figure 3 compares the FE mesh of a gearbox created using the housing flexibility program and a commercial meshing program. The in-house model consists of brick and quadrilateral shell elements while the commercial model mainly consists of tetrahedral elements. The SKF model has a higher performance/cost ratio compared to tetrahedral-based programs which may partly explain why the housing flexibility program requires fewer elements to achieve the same results.

The software has been applied successfully by SKF Luton, UK, to a real-life gearbox problem leading to a customer order for SKF. As a result, the potential was quickly recognised and it is being further developed.