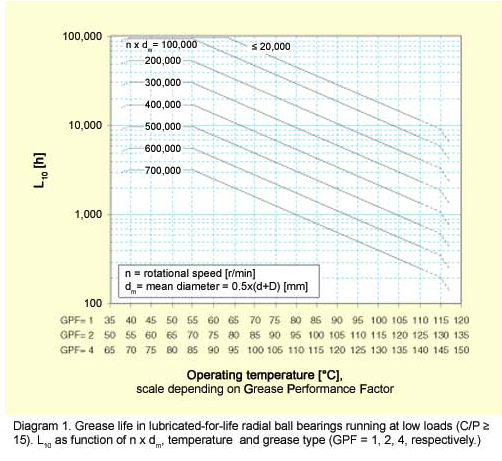 An important step was made by recognising different grease failures as a function of operating temperature. This understanding resulted in the formulation of the SKF “traffic light” concept, which is published now in the SKF General Catalogue 5000. This concept is summarised in ure 1.

ure 2shows schematically the predictable behaviour of the grease life in the green zone. Bearing applications running outside the green zone must be treated as exceptions, as grease-failure mechanisms are abnormal (more complex, with a large spread) and more difficult to predict.

Finally, the effect of load on grease life was introduced as a separate correction factor. At low loads (i.e., C/P≥ 15) grease life is independent of the load, but for higher loads (C/P <15), a correction factor is required. In some older models, larger bearings were apparently treated more conservatively, as these were often involved in applications with relatively high loads. The above analysis has resulted in the new relubrication interval diagram in the SKF General Catalogue 5000, which is valid for an operating temperature of 70°C, using good quality lithium thickener/mineral oil greases. Recommendations on how to account for the accelerated ageing of the grease with increasing temperatures and related limitations are given separately. The equations behind this relubrication interval diagram are also used for the development of the dedicated diagram for lubricated-for-life bearings.

Lubricated for life
Recommendations for grease life are always based on statistical rules. The SKF relubrication intervals are defined as the time period at the end of which 99% of the bearings are still reliably lubricated. This represents the L01 grease life. For lubricated-for-life bearings, the grease life is preferably defined as L10, which is in line with definitions for bearing fatigue life. For a typical grease life distribution, the correlation between L01 and L10 is L10 ≈ 2.7 L01.

A first step towards an improved grease-life calculation tool was already made for SKF Y-bearings, with a new diagram pub­-lished in Evolution 3/03. In the next section a more universal diagram is presented for a wider speed range and with extra features.

New diagram
A new sophisticated diagram ( diagram 1) was developed for lubricated-for-life deep groove ball bearings using the same model as for the relubrication diagram. In this diagram, grease life L10 can directly be read as a function of the speed parameter A, operating temperature and grease type. Differentiation between greases is achieved with a grease performance factor (GPF). For three different GPF values (GPF= 1, 2 or 4, respectively), there is a different horizontal temperature scale in the diagram. In table 1 GPF values are specified for factory-fill greases applied by SKF, together with speed limitations for the life calculation for each of the greases.

The adjustment for temperature is the same procedure as explained in the SKF General Catalogue for the relubrication interval. In the shape of the curves, one can recognise the interval where the grease ageing follows the rule of a factor of 2 for every 15°C increase (inclined part) and a horizontal part at the lower temperature range. The solid parts of the curves are in the green zone, delimited by the LTPL and the HTPL.

In a shielded 6302-2Z deep groove ball bearing operating at 15,000 rpm (A=428,000), at C/P=8 and 90 °C, the L10 is estimated at 1,500 hours for a grease with GPF=1 (including a correction factor of 0.5 for the load ( table 2). A grease with GPF=2 would give a grease life L10 ≈3,000 hours. However, there is only partial advantage for this increase, as the estimate for the bearing fatigue life under these conditions is L10 ≈ 2,100 hours (calculated with the SKF rating-life method). Application of a grease with higher GPF is often more expensive, so the extra costs must be justified.

The visualisation of the effect of temperature on grease life in the new diagram is very useful when designing a bearing application. In case the grease life is the bottleneck for the life of the system due to internal heat generation, it is worthwhile to consider design improvements, focusing on better heat transfer and lower bearing operating temperature. Selection of a grease with higher GPF value can then be avoided, if feasible, which can have a positive effect on costs.

Correction factors
Outside the green zone, below LTPL or above HTPL (represented by the dotted lines in .2 and diagram 1) the grease life declines relatively rapidly, caused by deviating failure mechanisms. In these ranges it is not possible to predict grease life accurately on the basis of the general model.

The grease life calculations in the interactive tool LubeSelect (www.aptitudexchange.com, see also Evolution 4/01) now follow the same rules as in the new SKF diagrams described here. The validity of the new diagram and the GPF values for the standard greases listed in table 1 have been confirmed through extensive grease-life testing in the SKF R0F rigs at the SKF Engineering & Research Centre in Nieuwegein, the Netherlands.