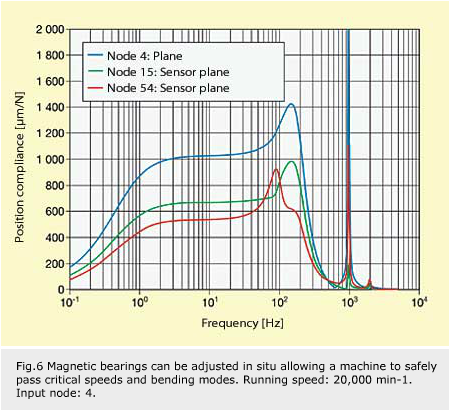 Magnetic bearing performance has been considerably enhanced by sophisticated software-control algorithms. This creates new opportunities for robust, cost-effective and energy-efficient designs with these versatile bearings.

The idea of suspending an object with magnetism was first conceived in the mid-1800s. Over the past two decades, technical breakthroughs have made many magnetic bearing applications economically feasible. Today, advanced software algorithms have been developed to increase performance beyond that originally considered possible.

A radial magnetic bearing is similar to an electric motor ( .2), but rather than generating a torque, it generates an attractive force to levitate the shaft. A typical radial stator consists of laminated actuators, each having two poles wound by a coil. Electric current in the coil produces an attractive force on a ferromagnetic rotor (laminated or solid). The air gap between the stator and the rotor is typically 0.5 mm to 2 mm.

For a magnetic thrust bearing ( .3) a solid steel disc is attached to the shaft with an annular stator on either side. The stator may have one or two windings to produce magnetic flux. The thrust stator can be solid or have laminated sections to increase the force response bandwidth. In machinery with modest thrust loads, the radial bearings can be replaced by conical bearings to control both radial and thrust motion. This eliminates the need for a thrust bearing and can reduce the overall length of the machine.

Active magnetic bearings are based on attractive forces. Shaft position sensors are used to provide feedback to the control system ( .4). Typically, inductive sensors in five axes (four radial, one thrust) are used. The sensors produce a linear output and have a wide temperature operating range.

The magnetic bearing currents are controlled and monitored via a controller, which uses control algorithms to vary bearing forces to influence the position of the shaft.

The DSP electronics provide the “brains” behind a magnetic bearing system. Advanced control algorithms measure position and regulate the current to the actuators 10,000 times per second. Machine-specific tuning parameters can be modified and saved in a file using a PC and SKF software called MBScope. This software also allows the user to monitor the bearing and shaft performance by looking at parameters such as vibration, balance and speed, etc.

SKF has a range of controllers available, depending on the output current and voltage required.

Bearing characteristics
Magnetic bearings do not require any lubricant. This makes magnetic bearings particularly suited to machines operating in a vacuum, at high or low (cryogenic) temperatures or in corrosive process fluids. In fact, any machine with no tolerance for contamination by lubricants or wear particles or where the lubricant is incompatible with the process may be a candidate for a magnetic bearing solution. For example, such needs have been identified in the semi-conductor capital equipment and food and beverage industries. Lubrication-free operation also means that lubrication and associated auxiliary systems, such as pumps and filters, can be eliminated, resulting in a reduction in overall ownership cost.

Low shaft rotational losses is another magnetic bearing characteristic. This results in the possibility of reducing motor power and achieving higher efficiencies.  Low loss means operating temperatures are generally lower than those in other bearings, such as rolling element or fluid film bearings. This results in a reduced requirement for cooling equipment.
Magnetic bearings work with a controlled air gap. Certain applications benefit directly from having an air gap – for example, where process liquid or material has to pass.

Biological and pharmaceutical applications involving life cell processing are just two examples. Magnetic bearings can also be hermetically sealed and are therefore attractive for processes handling corrosive fluids that would attack windings or laminations. They can also be submerged in process fluids under pressure without the need for seals and so are useful in sensitive processes such as in the food industry.

Compared to rolling element or fluid film bearings, magnetic bearings enable much higher surface speeds. Up to 250 m/s or about 4.5 million “n x d” (rotational speed in min-1 and diameter in mm) can be achieved. This level of high speed enables many new applications such as advanced machine tool spindles or a hydrogen circulators that was developed and manufactured for the US National Laboratories.

Cost-efficient solution
In order to realise the full value of a magnetic bearing solution in large turbo machine applications, it is essential to consider the life-cycle cost of the system: maintenance, energy, displaced system components, spare parts, etc.

By using a magnetic bearing system, the oil lubrication system, cooling system, gearbox (a variable, high-speed motor directly coupled to, for example, a compressor), and condition monitoring equipment can be eliminated and the footprint of the machinery decreased. The need for spare parts associated with the displaced equipment is immediately removed and the reliability of the machinery is increased.

When compared to a system with oil-lubricated bearings, the requirement for regularly scheduled maintenance is decreased, due to the removal of consumables and worn components. Auxiliary equipment is also eliminated, thus the number of potential failure points is reduced.

A magnetic bearing system consumes a fraction of the energy consumed by a hydrodynamic bearing system, due to the fact that it is rotating without contact. Significant energy cost savings can be realised – up to nearly 90,000 euros per year for turbo machinery above 1 MW. This calculation was based on a natural-gas compressor application ( .7). Chemicals, fuel and petroleum productsFood and beveragesIndustryMachinery and equipmentOther industryOther products and servicesProduct