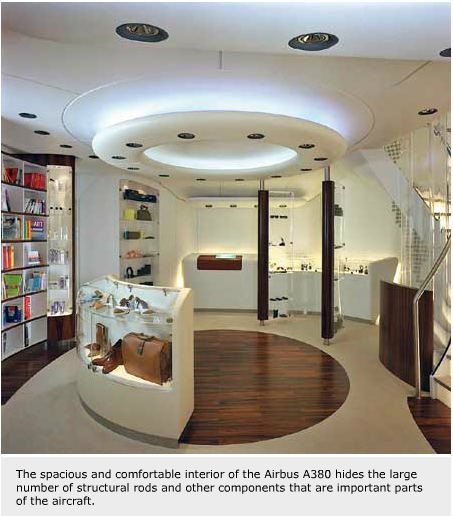 Composites and titanium are increasingly replacing aluminium and steel in aircraft. This and fly-by-wire technology are two routes to more cost-efficient operation.

Reducing the cost per passenger is a major goal for all aircraft manu­facturers. Weight savings for structure and consumption efficiency with  flight by-wire systems are the two main ways. They offer greater fuel economies and lessen the environmental impact. The use of alternative materials to aluminium and steel, such as composites and titanium, and the fly-by-wire concept are a growing part of the strategy for aerospace companies to achieve the savings they need to make to offer airlines cost-efficient operation over the lifetime of the aircraft.

Within SKF’s aerospace group, SARMA is a company that offers a range of products and specialized technologies that are designed to support the industry’s overall aims. It is, for example, the leading European player in special and integrated bearings for civil and military aircraft programmes. SARMA, which has origins that go back to 1932, has been a member of the SKF group since 1975.

Process technologies underpin the company’s business. SARMA holds a decisive lead in composite technology. The resin transfer moulding process, RTM, is a process that the company has developed for the manufacture of composite rods from carbon fibre and a polymeric resin. Such materials (i.e., composite) have good mechanical properties and a low density, which has made them an alternative to steel and aluminium.

Components are initially designed using a CAD system that takes into account design and stress calculations. The cutting of the carbon fibre material is carried out automatically to reduce dimension errors; this is followed by pre-forming and moulding steps. The resin needs to be injected into the mould to make sure that the liquid resin propagates uniformly throughout the mould. A vacuum pump system on one side of the mould draws the resin uniformly across the material. Following removal from the mould, the component is polished, machined, inspected and packed. RTM enables full control of complex shapes, repeatability and high-quality surface finishing.

For metal components, SARMA also uses a forming method called swaging, which reduces a regular or irregular section of tube to a pre-determined diameter using dies, which surround the tube. Two swaging techniques are used: plunged swaging and stationary spindle swaging. Plunged swaging, which is used for diameter reduction, results in feeding the tube into an axial working position with fully open dies. Then the dies are plunged and the forming operation is carried out. In the alternate technique, the tube is fed axially at constant speed through oscillating dies, and the tube rotates. Applications include creating internal profiles to insert and fix parts to the tube.

Applications for airframe rods, both metallic and composite, include flight control actuation, landing gear actuation and the wingbox. The wingbox is integral within the fuselage and is held in position by front and rear spars. It is subjected to tensile as well as compressive loads. Additionally, the wingbox also acts as a fuel tank, so the rods, which support the structure, are saturated with kerosene fuel. SARMA engineers have investigated the potential for weight saving using composite as well as aluminium. They found that the use of composite rods as struts in the wingbox results in a 40 % weight saving.

SARMA was initially set up to develop bearing systems. Today that range covers swaged spherical plain bearings, split ball plain bearings (SARMA patented) and slotted entry plain bearings. In 2004 SKF announced the development of a range of lightweight, titanium plain bearings that offer a weight saving of up to 40 %, with applications in landing gears, pylon attractions and wing assemblies. Ten different applications have been defined, including a pylon-to-wing attachment bearing, a spigot bearing and, for the aileron reaction, a strut rod end. The first application of this bearing will be in the Airbus A380, due to go into service in 2006. By adopting this design, the A380 will achieve a 45 kg weight saving per landing gear and 110 kg weight saving per aircraft, including the nose landing gear.

As this horizontal tail plane system plays a vital role in the stability and safety of the aircraft, a fail-safe system has been incorporated to enable a dual load path for the hinge assembly and the spherical bearing.

Stability and control are also issues at the front of the plane.