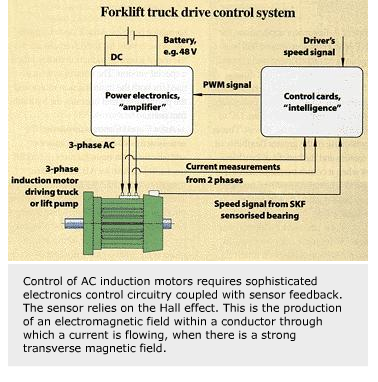 One of the first industrial applications of the SKF sensorised bearing is electrical forklift truck drives.
As part of the control system for an AC drive, it marks an important step in the evolution of this type of motor control.In one of its first motor applications, the SKF sensorised deep groove ball bearing has been incorporated into a control system for electrical forklift truck drives, made by Atlas Copco Controls AB, Sweden.

Until now, DC motors have dominated electrical forklift trucks’ applications, as the cost of AC control has been relatively high despite the benefits.

Three-phase induction motors are low cost because of volume production. In addition, even the more sophisticated electronic control systems are becoming cheaper, thanks to price reductions in microprocessors and power semiconductors such as thyristors. For this reason, coupled with the performance benefits of robustness and low maintenance, the electronically controlled AC motors – synchronous or asynchronous – are the drive system for the future, both for forklift trucks and electric road vehicles.

By incorporating features such as speed feedback using the SKF sensorised bearing, AC drive systems can match the cost of traditional DC drives while giving performance benefits. Atlas Copco Controls’ AC drive system for forklift trucks allows the use of a regular induction motor, albeit a special version. The control system is used for both the main traction motor and the pump motor that operates the hydraulic functions.

Atlas Copco Controls developed the new system, AC SuperDrive, together
with the Swedish manufacturer of forklift trucks, BT Industries AB, and electric motor producer, ELMO Industrier AB.
The control system gives optimised torque throughout the speed range, while the truck has lower maintenance time and cost, fully regenerative braking – resulting in minimum brake wear – plus a number of other benefits. The first model to use this system, the new reach truck BT Reflex AC, was launched in October 1997. The difference in performance has been noticeable with improved capacity (pallets per hour) and better lifetime cost efficiency of the truck.

Once it was decided that an induction motor should be used in this truck and that the system required a speed feedback loop, it became clear that a speed sensor integrated with the bearing was the best, if not the only, solution. A sensor outside the motor would need space that was not available. Even if there was sufficient space, other commercial sensor types were either cheap but too simple, or good but much too expensive.

The SKF sensorised bearing occupies no extra space, is well protected inside the motor, and provides a reliable steady pulse signal. Another benefit is the simple installation: Once the bearing is fitted, the speed sensor is installed and quality inspected. All bearings have passed through a quality and performance inspection during manufacturing, saving time and effort in system assembly.

The signals from the SKF sensorised bearing are used as input into the microprocessor, together with the actual currents from two of the phases feeding the motor. A signal from the driver/operator is added; from this data the microprocessor will generate as output a pulse width modulated (PWM) signal. This signal carries information about which frequency (motor speed) and current (torque) should be supplied to the motor. The PWM signal is finally converted and amplified into three AC currents to drive the three-phase induction motor.

This speed feedback system gives excellent response time and good drive system dynamics. The AC drive can ramp up speed from 0 to a steady 3000 r/min in 0.5 seconds (on its own – not in the truck). The system can instantly maximise motor efficiency for each combination of load and speed.

Safe inside the motor

In this specially developed motor from ELMO, the SKF sensorised bearing is fitted at the non-drive end of the induction motor. The bearing is located with the sensor facing the rotor. Normal fits and tolerances are used and the bearing itself has standard dimensions. Care should be taken that the shaft shoulder is not too high, so there is sufficient room for the sensor.

There is a notch in the inner cap to provide space for the wire terminal. This arrangement also prevents creep, i.e., rotation of the outer ring in the housing. The sensor wire is drawn through holes in the end shields out on to the top of the motor, where it is connected to the control box by means of an AMP Superseal connector plug.

The magnetism inside the motor is not a problem here, because of the robust sheet metal cover over the sensor components and the very small distance from impulse ring to sensor cell. Magnetism inside an AC motor does not normally pose a problem, but SKF can assist with measurements and advice if there is doubt. The sensor wires, however, should not be drawn in a bunch together with the AC drive power cables. It was found that this disturbed the signal.

The bearing part of the SKF sensorised bearing is based on a standard deep groove ball bearing, in this case a 6206. It has C3 clearance and is filled with a type of grease that is especially suitable for long-life operation even at high temperatures.

On one side there is a fluoro-rubber seal, rather than the standard nitrile, giving
particularly good high-temperature performance. On the other side, the sensor is fitted. The sensor part comprises one impulse ring and a sensor body with two sensors. The impulse ring is magnetised in 64 north and 64 south poles around its circumference. Around the impulse ring is a plastic sensor body with two Hall effect sensor cells fitted. Outside this is a steel cover, protecting the whole assembly, plus the wire terminal and wire.

The SKF sensorised bearing requires a power supply of 3.8 to 24 Volts. The output from this sensor is two square pulse signals with 90º phase difference. Atlas Copco Controls combines these two signals. By counting each upwards or downwards flank, 64 x 4 = 256 signals per revolution are obtained. This combining function is achieved in a simple logic gate before the signal is fed into the microprocessor.

As the SKF sensorised bearing has two sensor signals, it can provide information regarding not only the speed but also the direction of rotation.