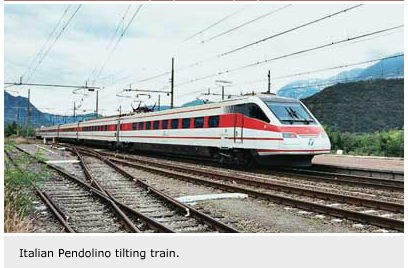 Most of today’s high-speed railways have wheel slide protection systems to avoid skidding and locking during braking. In many ways these are similar to the antilock braking system concepts designed for road vehicles. SKF has put tremendous efforts into developing integrated sensor technology to meet the specific and increasingly sophisticated needs of the railway industry.
Sensing technology incorporated into bearing systems has been available for more than a decade. SKF engineers continue to spend considerable effort and expertise in evaluating the best method of building sensor technology into railway bearing systems. As a result of such efforts, the SKF sensor system offers a growing range of features with the ability to detect rotational speed, bearing temperature and vibration. With such information, monitoring technology offers lower life-cycle cost, improved safety and better performance.

Wheel slide and skidding on railway vehicles can be avoided by using systems similar to antilock braking systems for cars and trucks. SKF has developed this technology to better meet the needs of railway applications.Most railway vehicles designed for higher speeds are equipped today with a wheel slide protection system to avoid skidding and locking during braking. In principle, such systems work in a similar way to antilock braking systems designed for cars and trucks. SKF has developed this technique further to match the specific needs of the railway industry.
The heart of this system relies on sensing technology incorporated into bearing systems. SKF engineers have devoted considerable effort and expertise in evaluating the best method of building sensor technology into railway bearing systems.
The choice of the optimum sensor arrangement was based on selective testing procedures involving typical axlebox application conditions under laboratory test conditions. The first speed sensors were field-tested in passenger coaches in 1990, and from 1991 they were operating in regular passenger service.
Development has continued in relation to sensorised bearing units, which are an increasingly standard component in modern railway vehicles. As a result of development efforts, the SKF sensor system today offers a greater range of features with the ability to detect:

User benefits
There are a number of user benefits in the use of integrated rotational speed/direction sensors. Most important are savings in space, weight and components. The system further offers easy installation in combination with mounted earth brushes. Mounting and maintenance are also straightforward. Integrated sensors also offer better and longer performance. This all contributes to cost savings and lower life-cycle cost.
Similarly, monitoring sensors provide advantages for users through the ability to continuously detect the bearing condition. Maintenance intervals can also be set in accordance with the bearing condition. In addition, the use of monitoring technology offers lower life-cycle cost, improved safety and better performance. Currently sensors can monitor a range of different parameters.
The speed sensor is based on a contactless measurement of the magnetic flux variation of a rotating impulse ring, which is mostly designed as an impulse wheel. Active sensors are powered, and passive sensors are not powered. Depending on the customer specification, there are three principal designs in use:

Many parameters
The bearing temperature measurement is based on a temperature sensor, which is accommodated inside the SKF sensor body. This enables a direct detection of the bearing temperature in real time.
Using an electrical circuit based on a double passive magneto resistor or a double full-bridge magneto resistor, the sense of rotation can also be detected.
The safety system receives signals by radio from the line between the two rails. It determines the maximum speed value for each track segment and continuously regulates and limits the train speed. The integrated sensor for the European ERTMS and Italian SCMT system has to fulfil the severe requirements demanded by railway authorities to detect the position, speed and direction of the railway vehicle.
The safety-critical tachograph systems use the speed sensor for input to devices recording vehicle speed and distance run.
SKF has now developed a vibration sensor concept to detect axial and/or vertical accelerations. All sensors are housed as before in a compact lightweight sensor housing attached to the bearing sealing system. The vibration signal, suitably processed, provides a “fingerprint” that can be used to characterise the operational development of the bearing condition. This can reveal emerging defects in advance of otherwise relatively severe failures, which could previously only be revealed by temperature measurement. Timely recognition of such conditions supports the management of maintenance operations and helps avoid unscheduled interruptions of service. More details about the BoMo Bogie Monitoring system can be found in Evolution NO. 1/2001, pages 21–24.
The monitoring of the vibration goes beyond the bearing itself: Wheel condition can also be evaluated online for out-of-roundness and tread defects, potentially reducing the need for periodic inspections. Continuous on-board vibration monitoring provides another key safety feature: the possibility to detect anomalous dynamic vibrations that could arrive during bogie derailment.

Different applications
The integrated sensor concept is applied in high-speed trains such as the Pendolino tilting-train family operating in Italy, Czech Republic, France, Portugal, Slovenia and Switzerland. The idea is also found in the Italian ETR 500 high-speed trains. Locomotives and multiple units in Italy and Britain are equipped with the integrated sensor concept. A further application field is the mass transit area: Metros in Catania, Guangzhou and Praha and low-floor tramways in Linz, Lodz and Torino are running with SKF sensors integrated into the bearing units.
Sensor development closely follows the mechanical bearing unit concept, which is focused today on more compact and optimised designs such as the Compact Tapered Bearing Unit (Compact TBU). The latest stage of the sensor development is a compact sensor design, which is integrated into the Compact TBU. The Compact TBU design concept is described in detail in Evolution NO. 1/2002, pages 26–30.