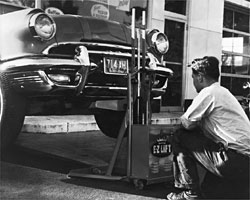 Crown Equipment Corp’s forklifts are not only tough, they’re stylish and smart.Does an industrial vehicle have to look stylish? After all, a forklift is no-nonsense piece of equipment designed to increase productivity and eliminate lifting injuries by hefting loads ranging from a couple of kilograms to two or three tonnes high into the air.
In action, forklifts zip around warehouses and factories, putting pallet-loads of everything from soup to hex nuts onto high shelves and taking them back down again. Not exactly a glamorous job that factors style into the equation.
But this is the Crown RR 5200, designed and manufactured by Crown Equipment Corp of New Bremen, Ohio, in the United States. Crown believes that form is the heart of function – a philosophy that is giving forklift operators sculptured cabs and controls designed with comfort in mind.
Crown’s rapid growth and shelf-load of design awards offer strong evidence that the design industry and customers agree.
Still, the RR 5200 isn’t just stylish. It’s smart.

Cold facts for a sensorised bearing
Crown Equipment Corp’s executives had to face some cold, hard facts.
The mechanical encoder and cable assembly on one of their top forklifts was acting up. The system’s job: Measure the height of the load and tell the operator, via a control panel display, when the load was too high for its weight. The problem: The brutal cold that some of the trucks had to work in was taking a toll on the measuring system’s performance.
About 25 percent of Crown’s lift trucks store and retrieve food in coolers and freezers where the mercury can drop to 40 below zero. “If you sell food, you use a freezer,” says Keith Pohl, a Crown purchaser. “Fish? You use a freezer. Ice cream? You use a freezer.”
But cruising between freezers and warmer rooms or loading docks took a toll on the system. Seeking a solution, Pohl contacted Joe Huffer, an American sales specialist with SKF.
“We knew SKF was making sensorised bearings – the kind used in antilock brakes for cars,” says Pohl. “We thought they might be our answer.”
Pohl rounded up SKF technical experts, who worked with Crown for about four months on design and technical issues – and helped make the bearings the answer. Now they are used in the encoding systems on Crown’s 5200 series lift trucks.
Report card: “SKF’s service was excellent, and the product is excellent,” says Pohl.

Crown Equipment Corp’s forklifts are not only tough, they’re stylish and smart.Does an industrial vehicle have to look stylish? After all, a forklift is no-nonsense piece of equipment designed to increase productivity and eliminate lifting injuries by hefting loads ranging from a couple of kilograms to two or three tonnes high into the air.
In action, forklifts zip around warehouses and factories, putting pallet-loads of everything from soup to hex nuts onto high shelves and taking them back down again. Not exactly a glamorous job that factors style into the equation.
But this is the Crown RR 5200, designed and manufactured by Crown Equipment Corp of New Bremen, Ohio, in the United States. Crown believes that form is the heart of function – a philosophy that is giving forklift operators sculptured cabs and controls designed with comfort in mind.
Crown’s rapid growth and shelf-load of design awards offer strong evidence that the design industry and customers agree.
Still, the RR 5200 isn’t just stylish. It’s smart.

Load information
For one thing, an easy-reading control panel tells the operator when the load is too high for the truck’s rated capacity. The secret is an encoding device mounted on the mast, the vertical booms that raise and lower the fork and its payload.
Central to the system is a sensorised bearing that constantly measures the fork’s height. A display panel reports the mast’s lift zone (how far the mast is extended) and warns the operator if the load is too high for the load’s weight.
Crown uses the sensorised bearing as a replacement for an all-mechanical encoder. Here’s why:
“Twenty-five percent of our trucks work in big freezers, in food warehouses, in temperatures as low as 40 degrees below zero,” explains Crown’s manager of product development, Allen Trego. “They go from freezer to warmer rooms or outside to loading docks. The change in temperature and humidity is rough on a sensor.”
The new sensorised bearing shrugs off the temperature shifts. “That means the RR 5200 remains reliable in the food industry’s tough environments,” Trego says.
Visit New Bremen and you’ll find a city out of a picture book of the past. Crown’s corporate offices are housed in a cluster of restored 19th-century buildings.
This is a town of some 3,000, only slightly more than Crown’s workforce of about 2,500. Managers here will tell you that Crown’s workers devote a higher-than-usual level of attention to making machines right.
“The people who work here are from farm families,” says Crown buyer Keith Pohl. “They’re highly trained and skilled, but a lot of them learned welding on the farm. They know tools and how to make things.”

In-house manufacturing
That resourcefulness is reflected throughout Crown. While other industrial firms outsource much of what they sell, Crown manufactures essentially everything that goes into its products. It even runs its own print shop.
“We don’t assemble lift trucks,” Pohl emphasises. “We manufacture them.”
Crown’s roots reach back to 1945, when brothers Carl H and Allen A Dicke created the company. (Carl’s son and Crown’s present chairman, James F Dicke, joined the firm later in the same year. His son, James F Dicke II, is Crown’s current president.)
For a while, the Dickes marketed the Bumper Upper, an automobile jack for service stations. Sales fizzled, but the Dickes put the jack’s concept to work in their first line of lift tables – smaller, light-duty predecessors to today’s forklifts.
The company expanded the line, and soon users were walking behind more muscular, mobile lift trucks, operating the machines via controls on the handles. Customers at grocery stores and other enterprises found that the machines made unloading trucks a breeze – and their businesses more efficient.
Crown kept making its lift trucks more efficient, too. In the ’70s, the company turned heads by developing its RC series of trucks. By now, operators were driving lift trucks – facing forward, as any conventional driver would. Then Crown changed the rules by putting out a series of trucks in which the operator stands sideways.
It was a strange notion, but the company’s research – and operators’ experience – demonstrated it was the right position. No longer did the operator have to twist his head and body around 180 degrees to back up. He could look forward and backward with equal ease, simply by turning his head. Narrow-aisle operation
In 1974, the company introduced the first narrow-aisle reach truck, designed to negotiate more deftly the corridors and turns of warehouses and stockrooms with less-than-generous dimensions.
Improvements continued. By the mid-’90s, the company offered a line of machines any forklift manufacturer would be proud of. But it chose to make its models even better, redesigning them from the ground up.
Peter Bartlett, an industrial designer with Crown’s 18-person industrial design staff, explains the process: “The research included analysis of tasks and needs – what the operators really do and need to do. We evaluated lines of sight and established the right dynamics and feel for the controls. That’s important, because operators get feedback through the controls, much like a sports-car driver gets through the gearshift.”
The outcome? On Crown’s RR 5200 Reach Truck, designers lowered the power-unit profile so operators could see more of their surroundings. They made controls bigger and situated them more conveniently. They encased the controls in polyurethane for a better grip and added comfort, which translates into added operating efficiency. They made cabs roomier, and they lowered the step so operators could easily enter and exit – a touch that promotes added operating efficiency.
Not satisfied, the design crew introduced another big step in forklift technology: a sit, stand or lean operating compartment.
“By adjusting the lean pad or the whole seat, the operator can now change positions, depending on the task,” explains Bartlett. “That adds comfort and alleviates fatigue. It makes for happier, more-productive operators.”
Out of the revamps came a string of awards from prestigious design magazines and associations – not to mention more productivity for Crown’s customers.
Customer Christopher Miller, vice president of operations for Associated Grocers, a grocery warehouse, is pleased with the productivity gains his 42,000-square-metre warehouse achieves because of the speed and efficiency Crown builds into its trucks.
“One study says you save 10 seconds every time you pick up a case,” he says. “I know that doesn’t seem like much, but if you’re picking 2,000 cases-plus per shift – multiply that by 10 seconds and you do generate considerable time savings.”