» The charge of the tuk-tuks 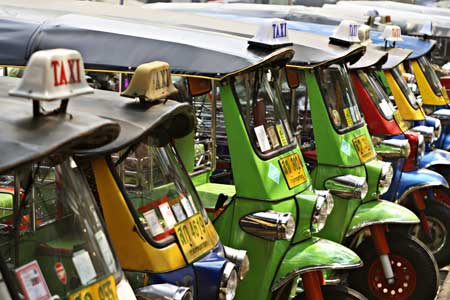 The charge of the tuk-tuks

The tuk-tuk is a familiar sight on the crowded streets of many Asian cities. One of the challenges when taking a ride is negotiating the price. But help is available.

The tuk-tuk is a familiar sight on the crowded streets of many Asian cities. One of the challenges when taking a ride is negotiating the price. But help is available.

To the non-resident, taking a tuk-tuk ride in any one of the many Asian cities where they throng the streets is an experience that’s not easily forgotten. Also known as auto-rickshaws, these three-wheeled taxis, powered by scooter or small motorbike engines, were developed as highly manoeuvrable transport solutions to crowded inner-city traffic conditions. The driver sits up front, steering with bike-like handlebars, and there’s usually space for two or more passengers on the seat behind him. There’s some form of roof, but otherwise not much else by way of weather or safety protection.

Part of the thrill of a tuk-tuk ride is negotiating the price of the fare. In Bangkok, Thailand, it can turn into quite a heated discussion, despite the Thais’ reputation for smiles. That matter settled, you’re off and away, hurtling through the lines of stationary traffic in the city centre with only millimetres to spare between you and the other vehicles. It can be a scary business, being a passenger.

But at least in India, a bajaj (auto-rickshaw) journey can be a more accurate business, thanks to the introduction of a dedicated metering device for displaying the fare. The fare meter uses a SKF sensorized bearing and shaft solution that converts the rotary motion of the engine into a series of
digital pulses that are then processed and displayed in the fare meter unit as the journey rate to the passenger.

Developed by SKF’s Electrical and Two Wheeler Business Unit, the bearing and shaft solution for the three-wheeler taxi fare meter can be simply and securely attached to the motor unit and provides precise measurement and pricing. Once in place, the unit is tamper-proof.

Even with the meter running, the ride may be an eye-widening experience, but at least you can’t argue over the price.