» The Evolution of crisis 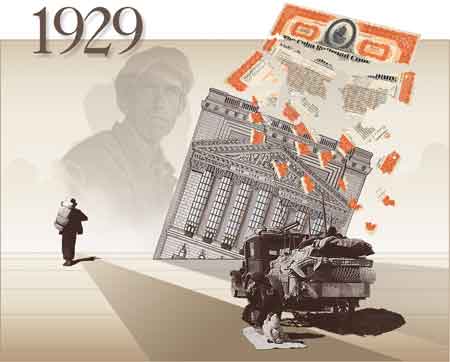 The Evolution of crisis

Although signs of the ongoing global financial crisis and ensuing economic slump started to appear over a year ago, the full force of the crisis didn’t hit the world’s financial markets until September last year. What has happened since will be part of economic and financial textbooks from now on. However, the chapter on exactly how ser-ious and how deep an impact the ongoing crisis will have on the real economy is still to be written.

Financial crises are nothing new. The current one has many things in common with earlier crises, even though the magnitude has not been seen since the Great Depression. But financial crises evolve and develop –
which is perhaps why they keep returning and surprising experts.

Although signs of the ongoing global financial crisis and ensuing economic slump started to appear over a year ago, the full force of the crisis didn’t hit the world’s financial markets until September last year. What has happened since will be part of economic and financial textbooks from now on. However, the chapter on exactly how ser-ious and how deep an impact the ongoing crisis will have on the real economy is still to be written.

The origins of the current crisis are to be found in the collapse of a housing bubble and the deleveraging of overstretched financial institutions, but financial crises as such tend to haunt the economy on a global or regional basis with some regularity. And just like the economy and the financial system itself, these crises evolve.

More specifically, the current financial turmoil is rooted in the sub-prime activities in the United States. Buyers with poor credit were lured into accepting housing mortgages with little or no down payment and without credit checks. Banks and financial institutions often repackaged these debts with other high-risk debts and sold them to investors worldwide, creating financial instruments called collateralized debt obligations.

But what was first thought to be a US housing bubble quickly spread across the globe, leaving wrecked financial institutions in its wake. The world was soon witnessing the consequences of financial globalization and the effects it could have when someone suddenly pulled the plug in terms of confidence.

Apart from money,confidence and trust are vital components in terms of keeping the global financial system pumping. If counterparts can’t trust each other and are unsure whether the other party will be able to honour the agreement or transaction, then they will hesitate to do business and the system will grind to almost a standstill. When companies find it difficult to borrow money to finance investments, trade financing disappears or suppliers are unable to get credit insurance, the effects on the real economy are vast.

What has surprised many experts is the extent to which the financial systems have become entangled and how little each participant knew about the risks they had accepted. The financial sector grew very rapidly in the past decades, and new instruments and ways of doing business were added by creative managers. Debt and its collateral have been bundled together with other types of debt and then sold and sold again, until no one really could tell what the real risk was.

Credit insurancemade banks take on risks they perhaps wouldn’t have otherwise, and allowed them to stretch their balance sheet further. In short, the explosive growth in the financial system created a complex web in which risks were dispersed without any trad-itional regulation or control.

This was also enabled by the emergence over the past quarter century of a “shadow” banking system of investment firms, hedge funds and derivatives dealers that are subject to the same risks as banks but not the same rules. The entire financial system has grown increasingly complex over the past decade or two. The crisis we are seeing now is largely that complex financial system steadily unravelling.

Just as in earlier crises, when the US housing bubble burst and credit-financed consumption came to an abrupt halt, it was a clear demonstration of what an uncontrolled appetite for risk coupled with a lack of
regulation could lead to. Yet, if we look at the past, previous international crises have in their own right brought insight into the mechanics of a financial crisis and the way out of them. The current crisis will do the same.