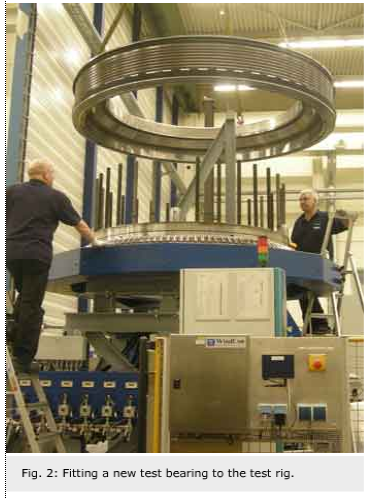 To make sure that designs for new large bearing systems for wind turbines meet their designers’ expectations in operation is the job of SKF’s new testing facility in Germany. Built in just 18 months, the test rig enables large bearings to be put through their paces before they start operation in some of the toughest locations and weather conditions in the world. As turbines grow in power and size, SKF sees the new test facility as a major support in the development of new bearing solutions for the wind power market.

Alternative energy generationis becoming an important part of the power gener-ation mix. Alongside the growing expertise in the construction of generating systems such as wind turbines is the development of ever-greater power generation. Already, turbines in operation have an installed power of up to 5MW. With legislation putting tough targets on CO2 reduction, it is likely that both the amount of installed wind power and the size of individual generating units will grow.

With 3 MW turbines standing at a height of 90 metres, large bearing systems are required at the heart of the generation machine. This is why SKF has built the test rig to support the validation of new bearing designs and advanced calculation tools in a full-scale bearing (se bild s. 1 and 2).

Germany, which operates both onshore and offshore wind farms, is one of the most enthusiastic users of this alternative energy source and thus an appropriate location for such a facility.

Along with increasingly greater installed power is the trend for increasingly larger bearings inside the turbines. The most commonly produced SKF main rotor shaft bearing is a special double row tapered roller bearing with an outside diameter of almost 2.4 metres (se bild s. 2 and 3). This bearing is the largest main rotor bearing for wind turbines manufactured in series production. So far some 1,500 bearings have been produced for one customer.

These harvesters of the wind are frequently sited in remote geographic locations, which are often difficult to access. This creates an increased demand for reliable performance of both the turbines and the bearings in the equipment. Despite its long and successful history in bearing development, using advanced manufacturing techniques and high-end design and calculation tools, SKF development engineers are faced with the need to answer a basic question from wind power customers: “Are your calculations validated?”

After an extended evaluation of the testing strategy, the decision was taken to develop a full-scale test rig that enables the engineers to investigate these very large bearings.

The SKF test centre in Schweinfurt in Germany was selected to design, build and operate the test rig. A key consideration in the choice of location was the proximity to the factory for large bearings, as well as to product development engineers and the experienced staff of the department.

Large double row tapered roller bearings can now be tested close to the factory instead of in the final application, without all the implications of accessibility and varying operating conditions. The bearings can be tested at speeds up to 60 r/min, which is more than three times the speed used in real applications. The rig enables various lubricants, lubricant distribution (se bild . 4) and lubrication conditions to be monitored closely, while the bearing loads can be increased up to twice the load carrying cap-acity of the bearing. At the same time, the friction performance, elastic deformations (se bild . 5), temperatures and other parameters are evaluated.

Design and manufacturing engineers from SKF believe that it opens new opportunities in large bearing design. Indeed, some of the first comments about the rig, with its numerous hydraulic load cylinders set on the perimeter of the inner rings, compared it with the booster of a science-fiction rocket that opens doors to new frontiers.

The new test rig enables the validation of SKF’s advanced calculation tools for large-size applications in terms of friction performance, lubrication behaviour, seal performance and life calculations. New designs and manufacturing processes can be validated in full scale, and important information on material response can be derived from the tests. SKF’s condition monitoring equipment installed on the rig enables the service condition personnel to hone their skills without travelling to remote locations.

Since the start of the testing campaign, the rig has drawn high-level attention to SKF from both customers and political leaders. The test rig proves SKF’s leadership in this bearing technology, its contribution to the reduction of energy consumption and the support in generating “green” energy. The test rig will be an important stepping stone in entering the even bigger and more powerful wind turbine market of the future.