Different material grades of silicon nitride have been shown to feature distinct differences in grindability, crack nucleation and crack propagation. It is possible to employ a scratch testing device in order to systematically investigate the effects of sliding wear on silicon nitride materials. Historically, scratch testing was developed for testing adhesion of coatings, but it has also found applications in bulk testing. In this test, a geometrically well-defined diamond tip is guided with a defined speed in the 1–20 mm/s range across a surface with linearly increasing load. This leaves a track that can be evaluated under the microscope. The set-up is shown in fig. 1 and examples of scratches in fig. 2.

For finished balls, a first approach done in the bearing industry is a simple crush test of two or three balls on top of each other. This gave a very rough estimate of a “static load rating”. The material resistance to cracks and Hertzian contact damage was tested by indentations with tungsten carbide spheres or by doing impact strength testing.

Strength, as a central material property, is traditionally measured on specially manufactured bending bars. This can be problematic since these bars have to be cut and finished in a different way than the rolling elements. As an alternative, SKF, together with the Montan University in Leoben, Austria, developed a new test method, called “notched ball test”. In this test, a notch is centrally cut into the equatorial plane of a finished component, which simplifies the process and gives values more relevant to the actual ceramic component. In the subsequent strength test, a load is applied at the poles of the notched ball, perpendicular to the notch, via two parallel anvils (fig. 7). The notch faces are squeezed together, whereby tensile stresses are generated on the surface opposite to the notch root. The load is then increased uniformly until fracture. From the fracture force the material strength is calculated [6–9]. The strength results of typically 30 specimens are plotted in a strength-versus-probability-of-failure curve, the so-called Weibull diagram as depicted in fig. 8. According to Weibull theory, strength is related to effective volume or effective surface. Therefore, they have to be calculated in order to be comparable to other methods of strength measurement. The starting point for this development work was the “C-sphere test”, which was developed at Oak Ridge National Laboratory, USA [10]. The difference is that for the notched ball test a slim notch geometry (5–15 % of the ball diameter) is used, compared to 50 % of the ball diameter used for the C-sphere test. This enables an easier specimen preparation as a smaller amount of the high-strength ceramic material used for ceramic bearing balls has to be cut.

Implementation of high-perform-ance ceramics in bearing applications requires a deep knowledge about material behaviour during processing and the finished product. Together, the presented tests allow a comprehensive and complementary characterization of actual rolling elements and enable identifying subtle differences in grindability, fracture resistance and strength depending on material microstructure, component size and rolling element surface finish. 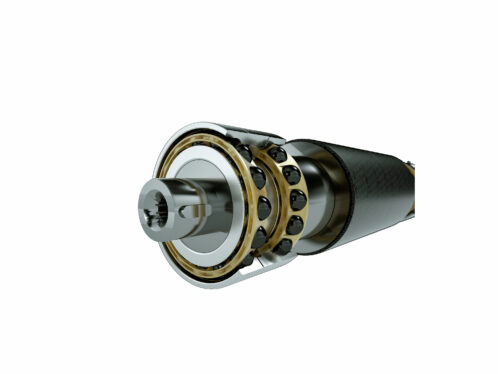