» A flash of speed 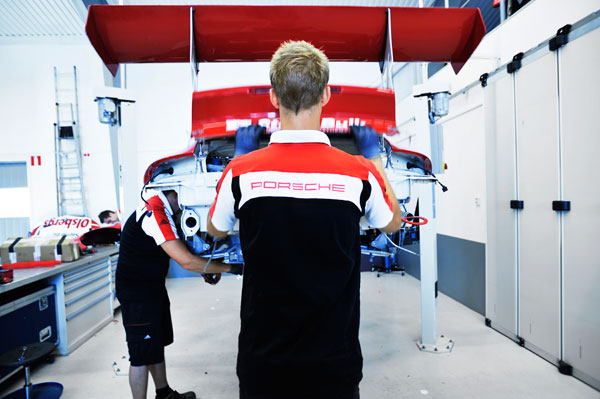 Sweden’s Flash Engineering has a promin-ent profile in the sports car racing world, organizing the prestigious Porsche ­Carrera Cup Scandinavia. It also has a strong commitment to sustainable racing.

Flash Engineering’s Karlstad facility houses four semi trailers (one is for catering the sometimes 1,000 guests at the races), three trucks and eight support vehicles, offices, a trophy room, a pool table, a conference room, a living room with wide-screen TV and a workshop for the company’s five high-performance race cars.

In terms of cleanliness, there is more than meets the eye at Flash Engineering. The company has a strong commitment to running its racing oper-ations as “green” as possible. This includes using more environmentally friendly diesel and gasoline for the trucks and race cars, HA oil-free tyres, no glycol for engine cooling and recycling of all garbage. Even the rugs that the mechanics use when working under the car are made of organic material. Flash Engineering is also involved in investigating the possibility of introducing a Formula 1-inspired KERS system, which recovers the kinetic energy of a moving vehicle, in the Swedish Touring Car Championship (STCC) for the 2012 season.

The main focus, however, is on performance. The Porsche 911 GT3s used in the Carrera Cup are factory-standard models with the same 450-horse-power, 3.8-liter engines and sequential gearboxes. With the interiors stripped out, they each weigh 2,600 pounds without the driver. The cars can take curves at 155 miles an hour and straightaways at almost 190 miles per hour. Temperatures inside the cab can reach more than 150 degrees Fahrenheit. Driving one of these cars is about skill, precision and determination.

“If you tried to drive one yourself, you’d stall immediately,” says Johansson. “The sound, the gear changes and the accelerations are brutal. And if you made it to a curve, you’d probably spin out of control on the slick Michelin tires. The pros, racing at 300 kilometers [about 190 miles] per hour, start braking so late into a turn you’d probably faint.”

There is also a royal touch to the team: Sweden’s Prince Carl Philip Bernadotte is one of Flash
Engineering’s drivers.

There are eight different Porsche Carrera Cups in the world – Asia, Australia, Japan, Scandinavia, Germany, France, the U.K. and Italy.

Of the 106 Porsche 911 GT3s that raced six laps on the 15.5-mile racetrack with 73 curves through hilly terrain, Flash Engineering’s three Porsches finished the race in the top 20.